The politics of blockades and a brand new cross-border conflict

Politics Insider for Feb. 13: Tories get loud about persistent blockades, Trudeau wins at least one Security Council vote and the CPC race gets a new candidate 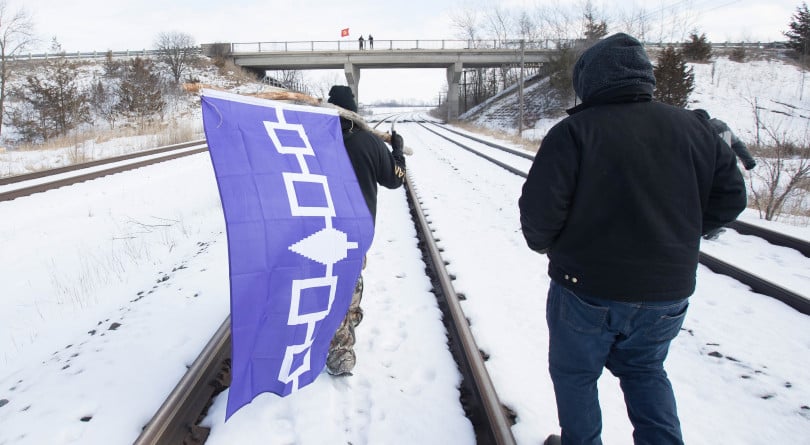 A man carries the Six Nations flag on the closed train tracks in Tyendinaga Mohawk Territory, Ont. on Wednesday, Feb. 12, 2020, in support of Wet'suwet'en's blockade of a natural gas pipeline in northern B.C. (Lars Hagberg/CP)

Canada’s outgoing Conservative leader, and one of the men who wants his job, are coming out firing against blockades across Canada. Andrew Scheer said in a news release that a few groups of Indigenous people who are standing in the way of bridges and railways are “trampling over the rights” of commuters, small businesses and energy workers. Scheer says Trudeau’s record on pipeline approval has “emboldened people to take these kinds of actions.” Call out the “illegal behaviour,” he said.

Erin O’Toole, currently a contender for the Tory leadership, ratcheted up the rhetoric, insisting Canada is “overrun by illegal blockades” at the hands of “eco-extremists.” Enforce the law, said O’Toole (as he fundraised off the news).

At the last stop on Prime Minister Justin Trudeau‘s African tour, those headlines back home caught up with the PM. Asked about the blockades in solidarity with Wet’suwet’en hereditary chiefs, Trudeau replied: “We recognize the important democratic right—and we will always defend it—of peaceful protest. This is an important part of our democracy in Canada.” Then came the pivot: “But we are also a country of the rule of law and we need to make sure those laws are respected … I am encouraging all parties to dialogue to resolve this as quickly as possible.”

One vote down: Trudeau won the vote of at least one country when the UN elects its next round of Security Council members in June. Macky Sall, the president of Senegal, told reporters his delegation would vote for Canada and encourage other African nations to do the same. The final leg of the PM’s tour forced uncomfortable questions about how a campaigning Canada can reconcile Senegal’s record on LGBT rights—homosexuality is illegal there—with friendly photo-ops. Trudeau said there is “more work to do” on human rights.

The outsized meaning of the Frontier oil sands mine: Alberta correspondent Jason Markusoff takes stock of the political brinksmanship at play as the federal cabinet considers Teck Resources’s potentially massive oil sands play. Of course, the operative word there is potentially.

Even if Trudeau’s reportedly divided cabinet approves the project, it is unlikely that birds and caribou will ever actually be threatened. Or if they reject the mine, that thousands of jobs will actually be killed. Yet somehow, the fact this oil sands mine is a largely theoretical 260,000-barrels-a-day project has failed to lower the stakes of approval.

The head of the union that represents federal parole officers told the Hill Times that Harper-era budget cuts forced frontline workers to do more with less—a move that meant parole workers “all of a sudden had their caseloads increased for no rationale other than to save money,”claimed Stan Stapleton. He applauded the Liberal government’s intent to rehabilitate offenders, but said there aren’t enough resources to do the job—and, in a twist, the union supports the Tory motion to investigate the Parole Board of Canada.

The Toronto Star broke the news yesterday that a proposed mine in northeastern Minnesota would disrupt a pristine Canadian watershed. The mine would sit near the Boundary Waters Canoe Area Wilderness, a smattering of rivers and lakes that are easy to get lost in—but ultimately lead to nearby Canada. A Minnesota congresswoman hopes Canada can put a stop to it. Because, hey, it’s been a while since a brand new cross-border irritant made headlines.

She’s in: Marilyn Gladu was the first woman to throw her hat into the Conservative leadership race, but Leslyn Lewis was the first to meet the party’s requirements as an “approved applicant”—the first official step on the road to full candidacy. Lewis’s website starts with a bang: “The Fabric of our nation is being pulled apart,” she writes. “Provinces want to leave. Debt is piling up at alarming rates. Our social divisions widen each day.” These debates should be fun.

If you’re in West Block today and pass by the Books of Remembrance that honour fallen soldiers, you’ll see Kenneth Earlwood Pennell listed on Page 83 of the In Service of Canada book. Pennell, who died in Egypt on Sept. 15, 1957, was among the first Canadian peacekeepers to die overseas. He served in the Second World War and, when the Suez Crisis produced a Canadian contingent of peacekeepers, Pennell was there.