The push for a new kind of (virtual) Parliament

Does Parliament really need to be all in-person? 'The pandemic has shown us that there are different ways of working,' says cabinet minister Karina Gould. 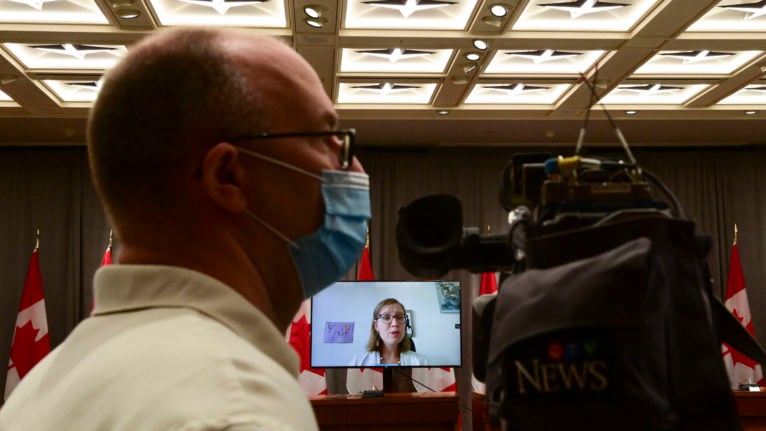 The world of bricks and mortar is under threat. With a global pandemic requiring physical storefronts to shut down or radically adapt their practices, the shift to online shopping has accelerated. Even mom-and-pop neighbourhood operations are pivoting to delivery. And forget about offices. Many of Canada’s white-collar jobs are being worked from home—from kitchen tables and basements and balconies. “Office centricity is over,” Shopify’s CEO declared on Twitter in mid-May, announcing Canada’s biggest tech company will be a permanent “digital workplace.”

Even institutions with dearly-held traditions have had to adapt to remote work. Canada’s Parliament has always drawn representatives from across the country to a single, physical location. That’s a hell of a commute, for a great many of them. Even the MPs who can’t figure out their mute buttons are surely noticing how much easier it is, now, to log in to the House of Commons from a spare bedroom than to schlep back and forth to the nation’s capital on a weekly basis, from the likes of northern B.C. or Prince Edward Island.

Picture, 15 years from now, that a fully-restored parliamentary district is largely a tourist destination. The green chamber is booked solid for corporate retreats and student conferences while MPs, soaking up their constituencies full-time, conduct their business from local offices. Emergency evening sessions do not require the rescheduling of flights but rather the negotiation of bedtime routines. Staff have mastered Slack, or the 2035 equivalent. Voting systems are secure. Air travel is at a premium, but caucuses still get together, monthly or quarterly, in different parts of Canada. And the public service, having ditched many of the National Capital Region’s office buildings, hires from across the country a truly representative workforce.

READ MORE: Out-of-office is the new office. Can the work-from-home boom last?

Let’s be clear. No one is suggesting that scenario. The sanctity of parliamentary protocol remains intact, jealously guarded by politicians who believe in the benefits of working closely with colleagues at a physical hub, and who are inclined to see any number of “modernization” efforts as attempts to disempower Canada’s legislators.

In the chaos of the pandemic, though, some see opportunities for reform.

“There’s so many traditions in Parliament. And people point to those traditions as being reasons why things can’t change—and yet we’ve been able to change so quickly during this pandemic and things are still working,” says Eleanor Fast, the executive director of Equal Voice, a group that advocates for the greater participation of women in politics. “We can come out of it with a bit of a silver lining, in terms of having had a chance to really examine the way that Parliament works and the way that Members of Parliament do their jobs.”

Fast says women often cite work-life balance, long commutes to Ottawa and time away from home as deterrents to entering politics. Recent days have lent credence to the idea that some parliamentary business can be conducted remotely, at least part of the time, she says.

Karina Gould, the first woman in Canadian history to give birth while serving as a cabinet minister, says she is hopeful that the proof will be in the pudding. “We can still be a fully-engaged member of Parliament, a fully-engaged minister, even if you’re not physically present in Ottawa for a period of time,” says Gould, who is currently the Liberal minister for international development.

The research director for democracy think tank Samara Canada, Mike Morden, cautions that Parliament shouldn’t rush to permanently adopt today’s emergency measures. “A lot of the expressed opposition to something like remote voting has been couched in concerns around a slippery slope, a dangerous precedent. Like, if we do this now, no one will ever meet in Ottawa again,” he says. He doesn’t find the argument very persuasive, but he does recognize that some will read a “hidden agenda” into anything that is proposed now. In an appendix to a recent committee report on options for remote voting during the pandemic, Conservatives made it clear that they are deeply suspicious of long-term motives.

When normal times resume, instead of allowing people to spend less time in the capital, Morden would encourage them to spend more time here, along with their families, and expand parliamentary sittings. “It’s not reasonable to expect the members to be at 10 events every weekend and then back to Ottawa on Monday as an effective legislator,” he says. “It’s a message we sometimes try to transmit to Canadians is to lighten up on that expectation that the member’s going to be at your barbecue.”

Fast and Morden are on the same page in supporting the idea that MPs be allowed to vote by proxy. Fast notes that before a proxy vote became an option in the United Kingdom’s Parliament, an MP there was so pressured to attend a vote in person that she delayed a scheduled C-section. “It’s not just giving birth, of course,” Fast says. “When people have young children or they have childcare or family responsibilities, or their own health concerns, it makes sense.”

It was just last summer that MPs were granted the right to take paid parental leave, something Gould told reporters at the time was “long overdue.” But the fact there’s so much inertia in this historic institution has its bright side. If the rest of the world takes Shopify’s lead and speeds towards a “digital workplace,” that’ll give MPs plenty to study in the unending debate over how to bring Parliament into the future.