Politics Insider for Dec. 11: The PM and the premiers meet (virtually) to talk health transfers, the PBO says billions in stimulus could be mistimed and Doug Ford's lead keeps growing 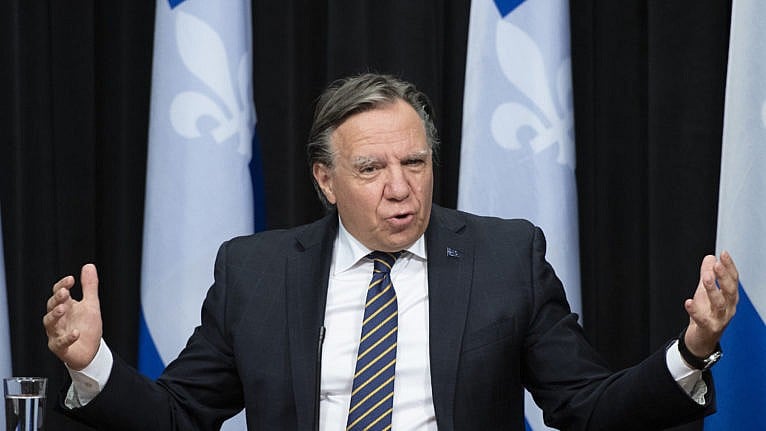 Quebec Premier Francois Legault reacts to talks he had with Prime Minister Justin Trudeau and provincial premiers on Dec. 10, 2020 at the legislature in Quebec City. (Jacques Boissinot/CP)

A low-key first ministers’ meeting ended with little fanfare and a pledge to kick the can—in this case, billions in increased federal health transfers to the provinces—down the road. Quebec Premier François Legault, the chair of the premiers’ council, was first to a mic, where he called the meeting a “failure” and said Prime Minister Justin Trudeau refused the provinces’ request for another meeting early in 2021. Nova Scotia’s Stephen McNeil said Ottawa promised to take on more of the health-spending burden. The PM held his own press conference shortly thereafter, where he told reporters that he did, in fact, commit to a boost in health funding—the details of which would be worked out “in the coming months.”

The parliamentary budget office has a beef with three years of Liberal stimulus spending that could reach $100 billion. A new PBO report on FinMin Chrystia Freeland‘s fiscal update did the math on three fiscal “guard rails”—employment rate, total hours worked and unemployment levels—that will dictate the size of the stimulus package. Here’s the hitch: most of those measures are forecast to return to pre-pandemic levels “by the end of 2021-22—the first year in which planned stimulus would be implemented.” The timing of the spending, the PBO says diplomatically, “may be mis-calibrated.”

Justice Minister David Lametti has successfully shepherded a bill to amend Canada’s assisted dying law through the House of Commons. Yesterday, Bill C-7 passed third reading by a vote of 212-107. With a week to go before a court-imposed deadline to modify the bill, C-7 is now off to the Senate.

Doug Ford remains solidly in command: Maclean’s contributor Philippe J. Fournier posted his analysis of a new Mainstreet/338Canada poll. The verdict? The PCs have a lead in every age group, and double-digit leads in every single region. The province’s year-long trend makes for a dramatic graph:

In this new poll, Doug Ford’s Progressive Conservative Party grows its lead among decided voters to a stunning 46 per cent, more than 20 points ahead of second-place Ontario NDP at 23 per cent. The Ontario Liberals, after enjoying a modest new-leader-bump in the spring, sit in third place with 20 per cent support—a level of support similar to its disastrous 2018 election result.

$9.3 million: That’s how much the Department of Justice says the feds have spent fighting Abousfian Abdelrazik in court since 2008. NDP MP Jack Harris asked for that total in a written question on the order paper. Abdelrazik, a Canadian citizen, was arrested in Sudan in 2003, imprisoned for several years without charge and has made credible claims that he was tortured behind bars. The feds once suspected that Abdelrazik was affiliated with al-Qaeda, but he was removed from a UN list of suspected terrorists in 2011. Amnesty International wants Ottawa to apologize for the whole affair.

Deferring for the gun lobby: Last month, Public Safety Minister Bill Blair delayed, for another three years, the implementation of federal regulations that would force firearms manufacturers to add mandatory markings to guns. That’s the eighth deferral since the regs were first approved in 2004. Few reasons were provided at the time, but a new notice in the Canada Gazette offers more detail. Gun advocates call the rules “unnecessary and costly.” Industry wants to “respect the privacy of firearm owners,” but also needs certainty either way. The feds have committed only to more consultation.

“I found an SOS note from China in a box of decorations—and it changed how I live.” That’s the headline on a 2018 story in Maclean’s that went viral on Facebook this week. Here’s the tale in a nutshell: In Oregon, among Halloween decorations, Julie Keith found a cry for help from a Chinese labour camp. Years later, it’s changed how she shops and parents. Read the full story. Here’s a teaser:

The fall air suddenly turned icy. My daughter couldn’t read yet but she could read my face, riven in concern and bewilderment. The letter’s steady tone of voice belied the shocking horrors it described. Tortures? Punishment? Innocent believers, put in prison? Thousands will thank and remember me? Who wrote this note? How did it get into this box of Halloween decorations? In an age of misinformation and wild publicity stunts, I needed to verify this before I believed any of it.

The problem child: The National Post caused a fuss this week by showcasing Kyle Kemper, the PM’s anti-vaxxer half-brother, on its front page. Surely, thought the Maclean’s hive mind, there are other dribbling siblings in our nation’s midst. Alas, we found only American examples of brotherly unlove: Bill Clinton’s half-brother, Roger, whose Secret Service codename was reportedly Headache; Barack Obama‘s half-brother, Malik, who befriended Libyan strongman Muammar Gaddafi; and Jimmy Carter‘s brother, Billy, who once urinated on an airport runway in front of reporters. We need your help. Email us your favourite tale of troublesome political siblings—local, national or somewhere in between. We’ll publish the wackiest one in this newsletter next week.