The rise and fall of Justin Trudeau's political honeymoon

Four years of public opinion polling show a remarkably popular Trudeau government, undone toward the end by its own mistakes 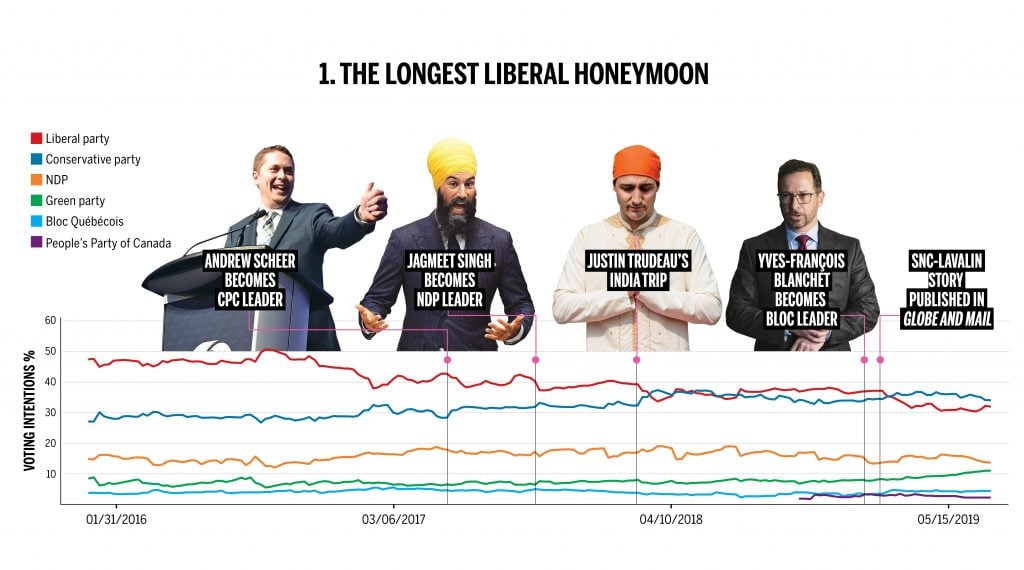 In mid-September 2015, several prominent Canadian polling firms like Nanos, Forum Research, Ipsos and EKOS were all measuring a tight three-way race between the Conservatives, NDP and Liberals. The federal campaign had been under way for more than a month already and voting intentions had barely moved.

Stephen Harper’s Conservatives, still polling reasonably well despite the wear and tear of a decade in power, could still hope for a win with the help of a split centre-left vote. The NDP, then the Official Opposition, had never been so close to power so deep into an election campaign in its history, and Thomas Mulcair had started the campaign on a strong note. And then there was Justin Trudeau: smiley, unproven and riding on a high of low expectations.

It was only after the Sept. 24 French debate aired on Radio-Canada that public opinion really started moving. NDP support in Quebec was quickly eroding and the party went from polling tied for first place to a distant third. Within a week the race was suddenly between Trudeau—with campaign promises such as legalized marijuana and electoral reform—and Harper. 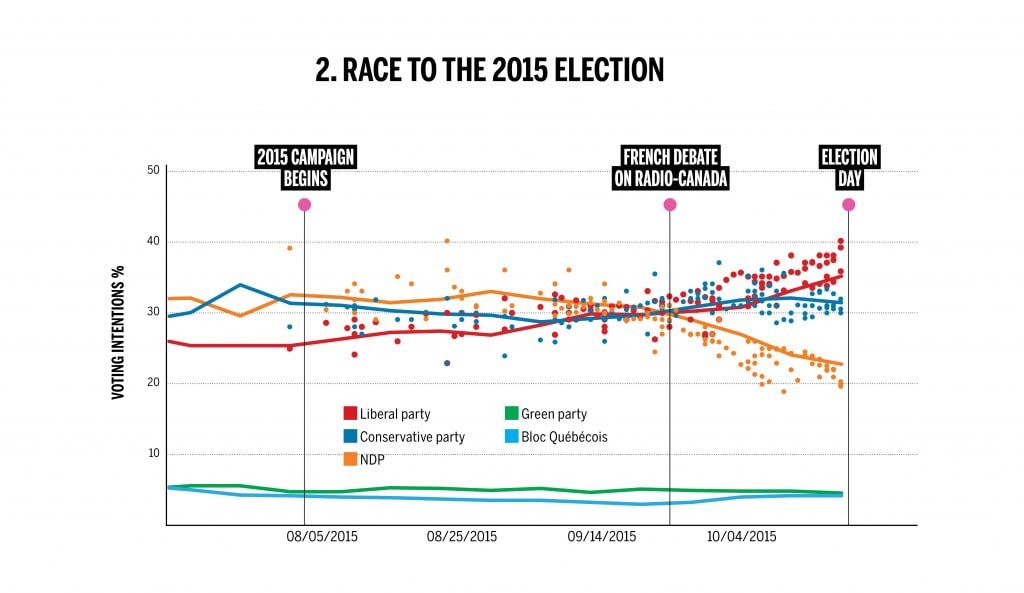 However, in the waning days of the 2015 federal campaign, Liberal support trended upward mostly at the expense of the NDP. There was unanimity in opinion polls that Trudeau had the momentum—the only disagreement among pollsters was to what extent the Liberals were going to win.

The answer came loud and clear on election night: Trudeau became the first party leader in Canada to take his party from second opposition to the government benches, winning the popular vote by 7.5 points over the Conservatives, with 184 seats in total–14 more than the threshold for a majority.

For the first half of Trudeau’s reign as Prime Minister, opinion polls consistently showed the Liberals with a considerable lead in voting intentions, with average national support ranging as high as 40 to 50 per cent—higher than the election result of 39.5 per cent. While it is common for a new government to ride a wave of sympathy early in its mandate, Trudeau’s honeymoon period was by all accounts abnormally long.

Case in point: Trudeau remained in first place in popular opinion even after his two main rivals, the Conservatives and NDP, elected new leaders.

It is not uncommon for a new leader to enjoy a temporary boost in voting intentions after a much scrutinized leadership campaign. Tom Mulcair carried his NDP to a tie for first place in voting intentions shortly after he was nominated NDP leader in the spring of 2012. Trudeau himself enjoyed a similar jump in the polls when he won the Liberal leadership one year later. 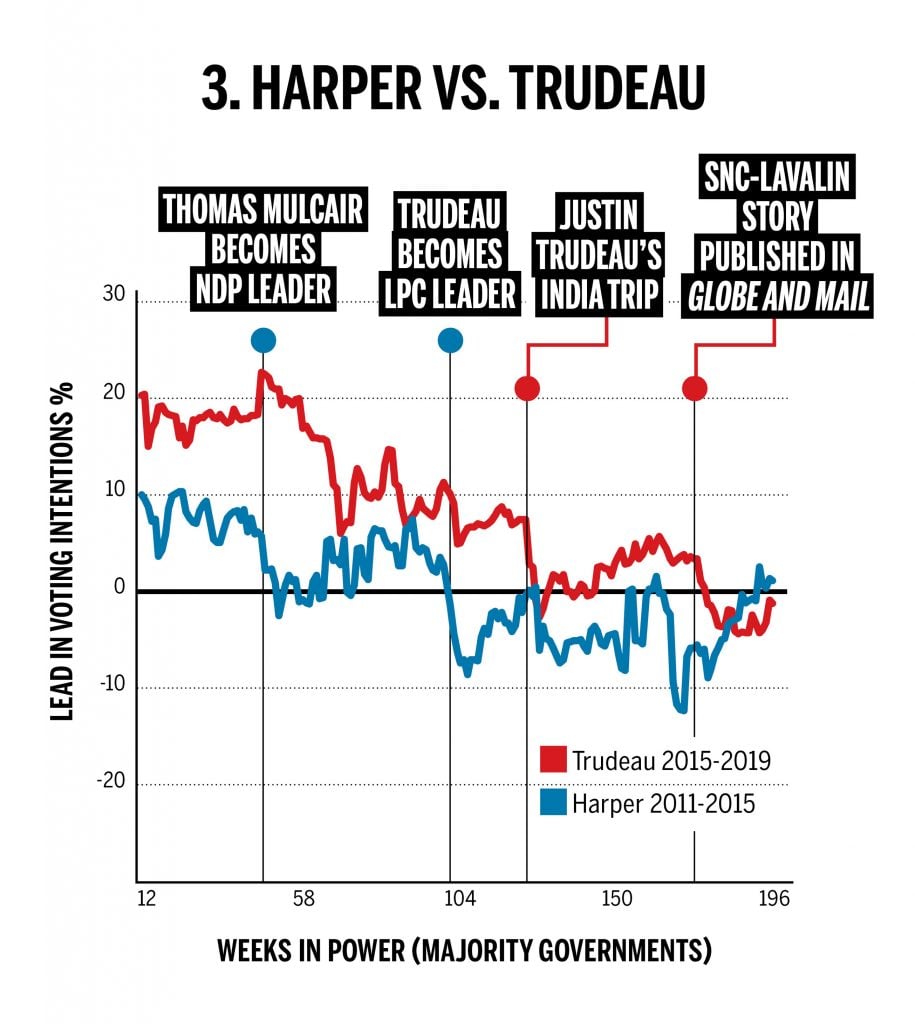 When Andrew Scheer won the Conservative leadership in spring 2017, Liberals were still polling eight to 10 points higher than the CPC on average. Surprisingly, the nomination of Scheer had no measurable short-term effects on voting intentions. Scheer’s relatively unknown status at the time and the fact that he had won a tight 51-49 race against Maxime Bernier would be a fair hypothesis as to why that was the case. Or was it just that Trudeau had yet to make any serious gaffe in the eyes of the public?

The same could be said for Jagmeet Singh after he won the NDP leadership contest in October 2017. NDP support across the country did not budge outside of normal statistical fluctuations. Numbers did not jump, neither did they dive. Outside of NDP circles, “apathy” might be the best word to describe the reaction to Singh’s nomination.

It wouldn’t be unfair to state that Trudeau’s honeymoon period ended of his own doing—and it all happened in a span of three months. In December 2017, federal ethics commissioner Mary Dawson concluded that Trudeau’s family vacation at the Aga Khan’s private Bahamian island violated conflict of interest rules. Although this story did not seem to immediately break the magic between Trudeau and many of his supporters, Trudeau’s much criticized trip to India in February 2018 officially ended the honeymoon. 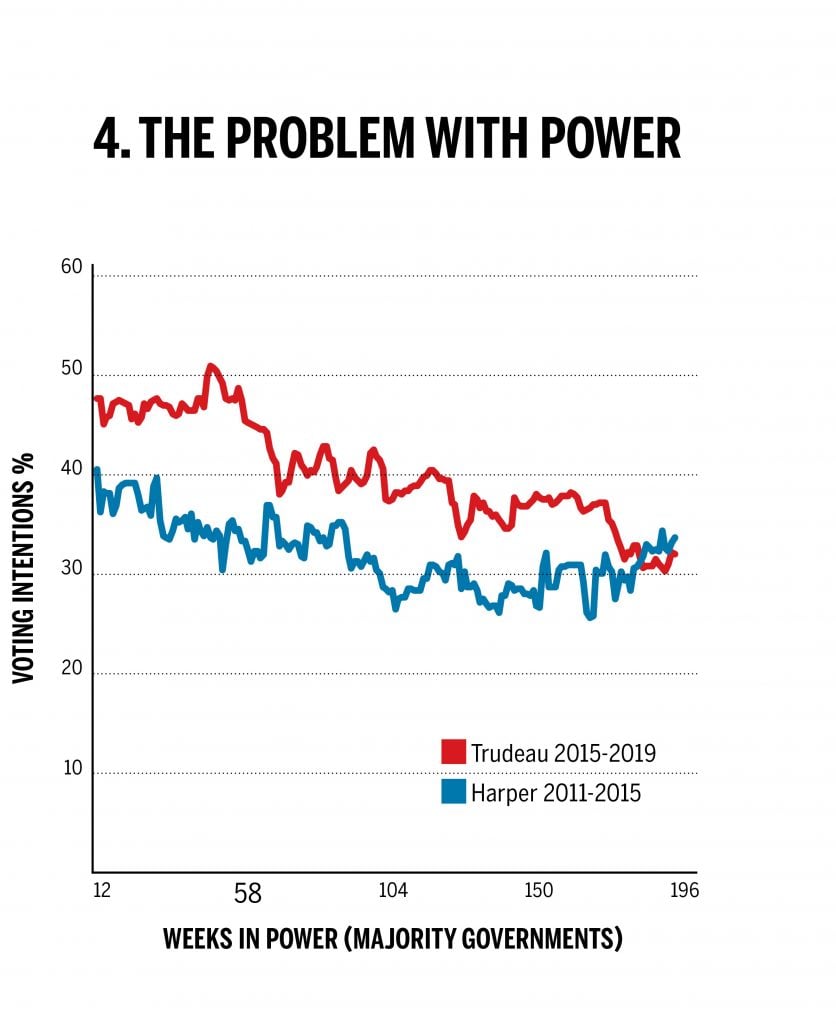 Within weeks, opinion polls showed a sharp drop for the Liberals, and the poll aggregate had the LPC in second place behind the Conservatives for the first time since the election—a full two-and-a-half years after Trudeau came to power.

Being in a position of power eventually erodes any leader’s likeability, and all leaders of western liberal democracies have a limited shelf life. When every government misstep lands at one’s feet, fairly or unfairly, it is bound to take a toll.

With respect to voters’ intentions for Trudeau’s Liberals and Harper’s Conservatives during their respective majority mandates, we notice both curves trending ever so slowly downward with time—along with Trudeau’s steep slide on the right, which was triggered by the SNC-Lavalin affair.

Nevertheless, unlike Harper during his majority mandate from 2011 to 2015, Trudeau has never had to deal with an especially strong NDP. Since the 2015 election, the NDP has not reached the 20 per cent mark in the poll aggregate once, whereas it regularly polled between 25 and 30 per cent when Tom Mulcair stood as leader of the Official Opposition.

A lukewarm Conservative leader combined with a weak NDP (including what appears to be a complete NDP collapse in seat-rich Quebec) should objectively be the perfect electoral scenario for any Liberal prime minister. However, at the time of this writing, available data shows that Trudeau’s re-election is no shoe-in.

A modest resurgence of the Bloc Québécois with Yves-François Blanchet at the helm, the Green Party of Canada polling in double digits in every region of the country outside Alberta and a high-profile former justice minister now running as an Independent candidate in Vancouver-Granville could all spell disaster for Trudeau.

He only has a few weeks left to recover his “brand” and regain the confidence of just enough of those Canadian voters to avoid becoming a one-term wonder.

This article appears in print in the September 2019 issue of Maclean’s magazine with the headline, “Poll positions.” Subscribe to the monthly print magazine here.