The Throne speech where everything and nothing was normal

Nick Taylor-Vaisey: There was elbow bumping, masks and only a handful of MPs. But the drama, commotion and high stakes were all front and centre. 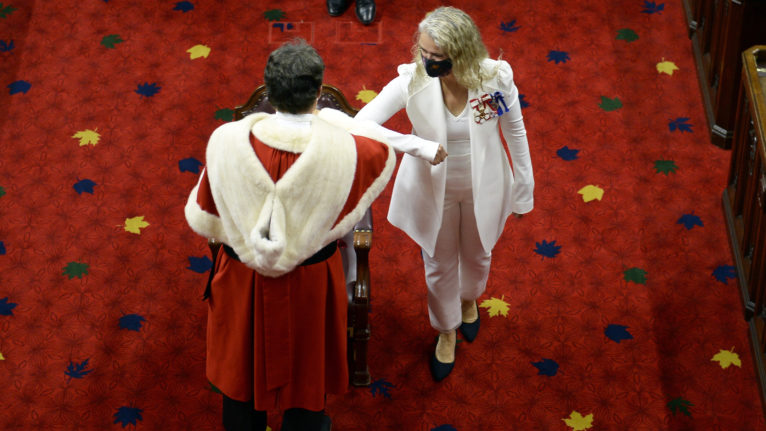 Everything was normal and nothing was normal about the sunny afternoon in Ottawa when Governor General Julie Payette recited the government’s Speech from the Throne to a sparsely filled Senate chamber that once served as a train station’s waiting room.

Outside the Senate building, where red carpets signalled the pageantry that awaited within, Payette was greeted, per tradition, by a 21-gun salute and serenaded by a modest military band. Demonstrators faithfully and vocally clustered on the periphery of the small plaza in front of the entrance. The anti-abortion crowd erected visually repulsive blown-up photos all around. Indigenous demonstrators championed the Land Back movement and chalked the sidewalk with support for Mi’kmaq fishers in Nova Scotia. The “Trudeau is a traitor” crowd hung around the edges, and a large “GREEN AND JUST RECOVERY” banner dominated the scene.

That commotion is typical for Ottawa on days when the federal VIP set congregates in the same room. But inside, hallmarks of the pandemic era left no doubt that this Throne Speech wasn’t like the others.

It all started with a prayer. Before Payette or Trudeau’s arrival, the Senate’s Speaker, George Furey, counted a quorum of senators and read his script. “Almighty god, we beseech thee to protect our Queen, and to bless the people of Canada, guide us in our endeavours, let your spirit preside over our deliberations so that, at this time assembled, we may serve ever better the cause of peace and justice in our land, and throughout the world. Amen. ” He then half-apologized for reading too slowly; his mask, he told senators, was fogging up his glasses. Indeed, only five people in the building weren’t wearing masks. Only Payette, and the four interpreters stowed away in their booths overlooking the chamber, were unencumbered by a cloth covering.

Inside the Senate, the carpets are still covered in a half-dozen species of maple leaf—red, sugar, douglas, silver, big leaf and vine—that are native to Canada. The headpieces of the thrones, one for the GG and another for a consort, are still made partly of English walnut from the royal estate at Windsor Castle. The parliamentary mace, which is said to have survived four different fires since 1845, still weighs 11 kg and must be in the room for any sitting to be official. But only 24 senators were in the room, where they sat two desks apart.

Eventually, the Chief Justice of the Supreme Court, Richard Wagner, entered the room and chatted idly with senators. Typically, all nine Supreme Court justices watch the Throne Speech, adorned in their puffy red and white robes. But this year, only Wagner made the trip. Earlier that day, he had joined his colleagues on the bench for a burbling courtroom drama just down the street, where provincial lawyers and their federal foes were sparring for a second day over the constitutionality of an Ottawa-imposed carbon tax.*

More normalcy: Trudeau was heckled as he entered the Senate building, trailing Payette in a ceremonial procession to the Senate floor. But on their arrival, Trudeau, Payette and Wagner embraced a bizarre quirk of pandemic protocol: ceremonial elbow-bumping. Then, seated in all their normal spots—Payette in her throne, Trudeau to her right, Wagner a few paces in front of her—they watched as the Speaker ordered the Usher of the Black Rod, J. Greg Peters, to pay a visit to the House of Commons. Yet more normalcy: Peters’s orders were, as always, to invite the elected parliamentarians in the House of Commons down the street to join the party. So off he went.

The televised broadcast cut away from the Senate the moment Peters left the room. He took any and all pomp with him, leaving the Senate with precious little to do before he came back. The chamber lapsed into an impromptu cocktail party—sans cocktails—where no one looked quite comfortable enough to make the first move. For those 15 minutes, the esteemed heads of every branch of government had absolutely nothing of consequence on their agenda. So Payette, Trudeau and Wagner did what anyone else would do. They turned to small talk.

Wagner held court with a few senators in the middle of the aisle. Trudeau ambled over to the government side and, after a few more elbow bumps, joined a conversation with senators Yuen Pau Woo, Patricia Bovey and Stan Kutcher. Payette toured the benches, chatting in brief snippets with senators along both aisles. Trudeau exchanged friendly banter with both Wagner, whose court* will ultimately decide the fate of the federal carbon tax based on this week’s hearings, and Payette, whose public image is tarred by allegations of workplace harassment stretching back years.

When Peters returned 15 minutes later, he brought with him House Speaker Anthony Rota and a gaggle of MPs. This, too, was both normal and abnormal. Dozens of elected commoners usually crowd the bar at the front of the Senate chamber, clambering for a view of the Queen’s representative. On this day, there were only eight. Among them was the NDP’s Brian Masse, the party’s longest-serving MP, who was watching the 14th Throne Speech since his first by-election win in 2000. Normally, Masse and his colleagues would listen to Rota make a few ceremonial remarks before Payette started reading her speech. But on this day, Rota said nothing at all—the fewer droplets the better, it seems, mask or no mask.

With everyone assembled, it was on with the speech. Payette unleashed a doozy in historical terms. She launched the second session of the 43rd Parliament with an address that clocked in at more than 6,000 words, double the length of last year’s Throne Speech and seven times longer than the average length of the first 10 delivered after Confederation. The chamber remained mostly still throughout. Ratna Omidvar, an independent Ontario senator since 2016, seemed never to cease taking notes for the duration of the hour-long address. By the end, only five MPs of the original eight remained standing at the back of the chamber.

Payette concluded with a plea that mirrored the speaker’s earlier prayer. She hoped that “divine providence” would guide the work of parliamentarians as they went about their governing. And that was it. The House speaker tipped his tri-cornered hat and exited the chamber. Soon, the building was empty of its VIPs and the hard work—those nasty debates over billion-dollar promises that could come to define this parliamentary autumn—was all that was left.

Back outside, the sun still shone. Down the street, a man wearing a “F–k Trudeau” T-shirt and a gaudy cowboy hat waited, patiently, for a hot dog. And the “GREEN AND JUST RECOVERY” banner that must’ve caught the PM’s eye, if only for a moment, sat perched outside a pub within view of Parliament Hill. The protesters who owned the supersized placard sat on the patio of D’Arcy McGee’s, imbibing as a modest reward for giving hell to their government. Nothing was normal, but everything was normal.