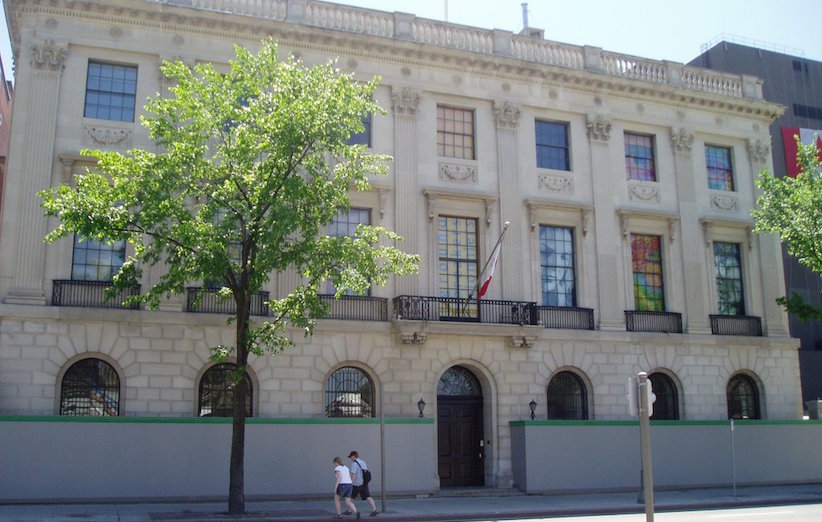 Prime Minister Justin Trudeau can’t have been expecting serious opposition to his announcement that arguably the most prized piece of vacant real estate in Canada—the former U.S. embassy building directly across from the Parliament Buildings—will be turned into an Indigenous centre.

But opposition is what he’s getting, at least from the Indigenous Task Force of the Royal Architectural Institute of Canada. Made up mainly of Indigenous architects, architecture students and academics, the task force says the empty beaux-arts beauty at 100 Wellington Street is all wrong as a showcase for First Nations, Métis and Inuit culture.

Those who admire the building, with its marble and mahogany and classical lines, might find it hard to imagine anyone turning down the chance to exploit its obvious aura of prestige and power. It served as the U.S. embassy from the time it was completed in the early 1930s until the Americans moved to a new, bigger Ottawa building in 1999. The high windows of the former ambassador’s office face north, across Wellington Street, almost directly at the Peace Tower.

A plan to turn the building into a national portrait gallery was embraced by Jean Chrétien’s Liberal government, then cancelled by Stephen Harper’s Conservatives. Trudeau’s Liberals rejected pleas to revive that project, instead hatching the Indigenous centre idea, which is in keeping with the government’s emphasis on reconciliation with Indigenous people.

David Fortin is an architecture professor at Laurentian University’s McEwen School of Architecture in Sudbury, Ont., where he has been appointed to take over as the school’s director next year. Fortin is of Métis ancestry and is a member of the RAIC task force, and he spoke to Maclean’s about why Trudeau’s 100 Wellington Street offer isn’t sitting well with Indigenous architects.

A: The gesture itself is welcomed, in the sense of the government making a recognition of the importance of the relationship between nations, this nation-to-nation kind of geography that could happen there is potentially very powerful.

Q: By geography, I’m guessing you mean how the new Indigenous centre would face Parliament. There’s an interesting symbolism there.

So I think that the gesture itself is to be commended and would be applauded. But there’s a couple of factors for me. If you look at the building itself, the initial intent is based on the idea of an embassy. It was there to house guests from other countries in Canada. To have Indigenous community people move into a space designed for guests—

A: They’re not guests, they’re not ambassadors. But the second part is the building itself. The building was designed in the beaux-arts tradition, which is really an extension of Italian Renaissance architecture, and which became part of a colonial fingerprint in North America. That’s something the American government really embraced, and so that building becomes a kind of extension of that into Canada. Canada’s own Parliament Buildings were intentionally designed not to be of a classical architecture, because Canada wanted its identity not to be a mirror image of what was happening south of the border.

Q: For people who don’t know the building, the former U.S. embassy has something of the look of government buildings in Washington, D.C., with neoclassical lines, pillars built into its façade, and an overall symmetry.

A: Absolutely. When the Canadian government was originally in design discussions for our own Parliament Buildings, it was a distinct choice not to have the American style kind of reflected in our buildings. That’s why we ended up going more toward the gothic architecture.

Q: And how does that contrast influence your thinking on an Indigenous centre?

Q: Couldn’t the building be adapted in some way?

A: Aside from just the aesthetic, if you look at buildings of that type, they’re stone facades with punched windows, which more than likely indicate that there are small rooms, individually private rooms. Often there’s a hierarchy to these spaces, meaning there’s a hierarchy to the people inside these buildings. That’s antithetical to how Indigenous space would have been used for governance and community gathering. So there’s really nothing about the building that would reflect Indigenous people in any meaningful way.