Shannon Proudfoot: Jody Wilson-Raybould and Jane Philpott are driving the action and dictating events. It's a radical departure from the regular boys' club. 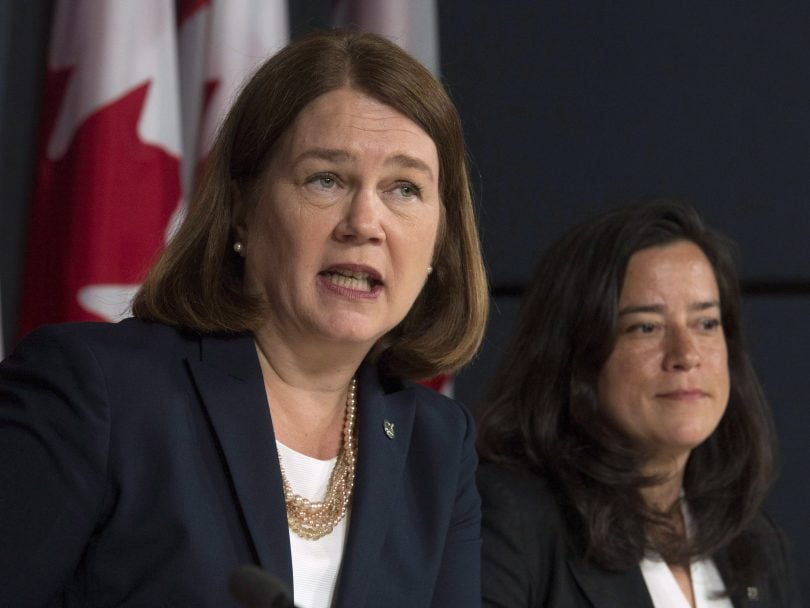 Philpott responds to a question as Wilson-Raybould looks on during a news conference in Ottawa on Thursday, June 30, 2016. (THE CANADIAN PRESS/Adrian Wyld)

I don’t know the objective truth of the scandal swirling around SNC-Lavalin and Jody Wilson-Raybould. Frankly, I don’t know if any of us ever will know the whole story definitively, and I suspect tomorrow’s testimony from Gerry Butts et al will somehow turn it all inside out, yet again.

But in what’s unfolded so far, what has struck me is how fascinating—how completely novel—it has been to see two powerful women as the actors driving a story that has the capital transfixed. (It seems prudent to note here that there were two of them at publication time, because honestly, who knows what’s going to happen next? I’ve lost track of the number of surprised expletives that have floated up from cubicles in my office in recent weeks.)

From the moment Wilson-Raybould dropped that striking 2,000-word manifesto defending her record and the principle of judicial independence after she was removed as attorney general, through to her meticulous testimony before the justice committee last week, there has been a sense that she knows precisely what she wants to get on the record, what it will mean and what further questions it will invite. She’s a prosecutor, after all. It’s as though she keeps placing a piece of paper on a table in front of the Canadian public, writing side down, and announcing, “There is something here you should see. I am not allowed to show it to you right now, but I will leave it here until someone changes something so that you can see it.”

READ MORE: The playing field is tilted against Jody Wilson-Raybould

And when Jane Philpott announced her resignation as Treasury Board president on Monday, she was similarly purposeful and clinical in laying out her case. In the resignation letter she posted publicly she wrote that she “must abide by my core values, my ethical responsibilities and constitutional obligations” in no longer defending the government’s actions as a member of cabinet, adding: “There can be a cost to acting on one’s principles, but there is a bigger cost to abandoning them.”

Philpott said evidence that officials and politicians had attempted to interfere in the SNC-Lavalin case and in the principle of judicial independence left her deeply troubled, as had the response. “I have lost confidence in how the government has dealt with this matter and in how it has responded to the issues raised,” she wrote.

Neither of these women left any doubt about where they stood or which red flags they were raising.

The forthright and compelling way they’ve conducted themselves does not mean that theirs is the only version of the story that matters, with so much still unknown. But it’s the mere fact of watching women emphatically driving events and taking the actions that people can’t stop talking about that keeps stopping me in my tracks.

No one (aside, perhaps, from Jati Sidhu) would dare to make Wilson-Raybould or Philpott into the object in any sentence rather than the subject right now.

Contemporary politics is full of powerful and accomplished women, of course: Chrystia Freeland keeping calm and NAFTA-ing on, Hillary Clinton taking aim at that highest and hardest of glass ceilings, Angela Merkel running a humming economy and refusing to slam shut her country’s doors. But the way the SNC-Lavalin affair has unfolded in torturous little shards over many weeks has assigned massive importance, in real time, to the statements and decisions of Wilson-Raybould and Philpott. There is no doubt who the authors of our present story are.

After watching Christine Blasey Ford speak her truth—with aching earnestness, courage and principle—last fall and be gnawed at by Republican interrogators, then hounded into hiding while the man she accused ascended with barely a hiccup to the highest court in the land, it is quite a thing—in a very different context—to see a pair of women, standing on principle, own a narrative like this.

I did my undergrad in art history, and in that field, they often talk about “the gaze,” which is the component of a work of art that is about who is doing the looking—usually from the implied perspective of the artist—and what they are looking at. Throughout art history, women have been favoured objects of the gaze, preferably when they’re naked or beautiful or oblivious to being stared at, or otherwise have about as much agency as a human bowl of still-life fruit. Women are consumed; they do not do the consuming.

So much has changed, and yet it still feels that way in society in many more subtle ways. It starts awfully early in life, and it never lets up.

Every year my family attends a fantastic workplace Christmas party where they very generously distribute gifts to the kids, based on their age and gender. They tend to do Playmobil toys for the preschool set, and for the last couple of years, the boys got pirates or knights in action settings, while the girls got fairies and ponies. Why does this bother me? Because pirates are about action and adventure and doing, while a pony with a fluffy mane is about standing around being pretty while someone brushes your hair.

I can already hear the flying monkeys on Twitter howling about how I’m an SJW harpy who is overthinking this to a criminal degree. But what we see is what we know.

I remember stumbling across the Canadian women’s national team in a televised soccer match a few years ago and being bowled over by the simple power of seeing a bunch of women on TV sweaty and on the move,  hair pulled back, dressed for action and not aesthetics. We see men in this mode every night there’s an NHL game on the schedule, but it felt wonderfully, stupidly radical to see women that way.

There is otherwise this steady, subtle, lifelong drip played out on children’s clothing racks and toy store shelves; in books and TV shows; in assumptions that little boys will kick the crap out of each other while little girls will swan about in princess dresses; in teenage sexual negotiations and high-school dress codes; in adult workplace codes about the difference between being assertive and ambitious or bitchy and scheming; in older men with gravitas and older women rendered invisible. Men do; women are seen. And even if you know that’s absurd, it’s still in the water all around us.

The Trudeau government has been unabashedly, famously—infamously—onside with gender equality since that golden autumn walk up the Rideau Hall driveway with that first iteration of the cabinet, what now seems like a political lifetime ago.

It is either weapons-grade ironic or utterly perfect that the most profoundly feminist thing this government may have accomplished is provoking Jody Wilson-Raybould and Jane Philpott—two of its brightest legitimate stars—into booting the boys’ club out of its default position as the doers and deciders, and, with cool precision, seizing control of the action themselves.