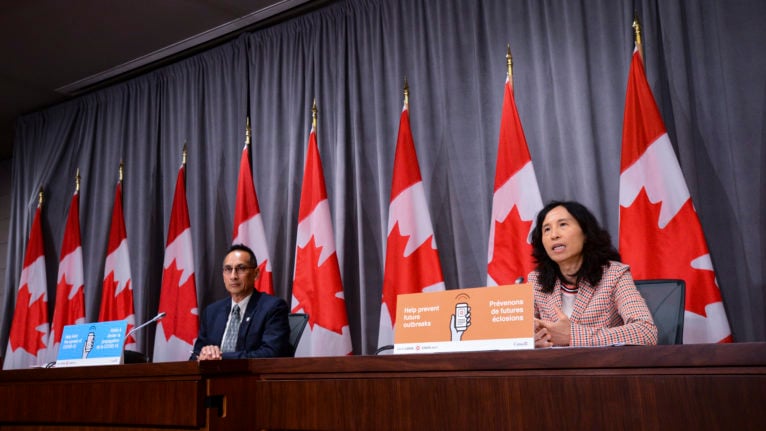 Anthony Fauci, America’s top infectious disease expert, recently told Congress he was “cautiously optimistic” that Americans could see a vaccine before the end of the year. Not so fast, says Theresa Tam, Canada’s chief public health officer. “I would say that vaccine is a very important aspect of the response going forward but we can’t at this stage put all of our focus in the hopes this is the silver bullet solution,” she told reporters yesterday. “We’re planning … to manage this pandemic certainly over the next year, but maybe planning for the longer term, the next two to three years during which the vaccine may play a role. But we don’t know yet.” Slow and steady, Canada.

Try to see WE from 35,000 feet: Andrew MacDougall doesn’t believe Trudeau’s story on WE. MacDougall, the former director of communications to Stephen Harper, says the PM’s tale demands from its audience that he wasn’t hiding a thing the whole time, and simply waited for his parliamentary testimony to spell it all out for the country. But MacDougall, whose résumé demonstrates a certain acuity for political speak, has another word for Trudeau’s story: spin.

Why did it take five long weeks into a scandal that’s eroding trust and support in his government for Trudeau to let slip that he was actually the hero in this sordid tale? One would think it’s the kind of information you’d put out early, to help douse the fire before it started raging. I mean, how could Trudeau’s office have misplaced this (seemingly) exculpatory nugget? The answer is because it was most likely crafted after the fact. Welcome to the world of political damage control, friends, where the job is sifting through the embers of your failed spin to find an explanation, any explanation, that can stand up for a news cycle.

The Liberals have lost an MP to another line of work. iPolitics broke the news that Michael Levitt, who represents a riding in North York, Ont., is stepping away to become president and CEO of the Friends of Simon Wiesenthal Center for Holocaust Studies. A draft message to constituents included a familiar refrain: “I know deep down that now is the time for me to put family first and come back home, both physically and mentally.”

What happened to the old Doug Ford? Before the pandemic arrived in Canada, the Ontario premier’s ratings were in the tank. Only a couple months later, Ford had flipped his reputation on its head. Your newsletter correspondent talked to people near him, Tory insiders, public-health experts and political opponents to get a sense of how the coronavirus forced the premier to evolve.

A cascading series of mid-March events jolted the premier into taking the virus seriously. Ford’s pre-pandemic reputation bent toward overconfidence. He’d gotten in trouble for various patronage snafus, including when he appointed his friend as provincial police commissioner. But a senior government source at Queen’s Park said the public response to that March Break misstep “caught the premier’s attention.” That’s when it hit home that the province was paying close attention, and demonstrated, the source said, “how much people hung on to every single word.”

Canada’s behind-the-scenes work at the World Trade Organization has produced a semi-workable appeals process that involves 23 signatory countries to what’s called a Multi-party Interim Arrangement (MPIA). The WTO’s formal appeals process has ground to a halt amid a lack of arbitrators. Now, a Canadian lawyer is among the roster of arbitrators cobbled together by the MPIA nations who will settle disputes: Valerie Hughes, senior counsel at Bennett Jones and veteran of 70+ WTO disputes. Before she joined the firm, Hughes was a senior bureaucrat in several departments.

As Canadian companies push out record amounts of hand sanitizer, Health Canada is busy catching up to any of the disinfecting gold that violates federal regulations. Yesterday, the department flagged HgH Integrative Aromatics for selling its Clean & Green Hand Sanitizer Gel, which reportedly contains “technical-grade ethanol” that “may pose a risk to health”—and has been recalled.

Murray Sinclair, a former judge and sitting senator who headed up the Truth and Reconciliation Commission, is dipping his toe back in the legal world. Sen. Sinclair is joining Cochrane Saxberg, which is the largest Indigenous law firm in Manitoba. CBC News reports Sinclair will mentor young Indigenous lawyers—many of whom were educated in mainstream law schools but are looking for guidance on practicing from an Indigenous perspective.

The feds are everywhere: Last week, your newsletter correspondent noticed a small jet flying above his apartment in Ottawa. FlightAware records showed the aircraft had flown from Winnipeg and was returning the same day. The day before it had popped over from Winnipeg to Dryden, Ont. Who exactly was on that plane? The department had an explanation. The Dryden flight carried a civil aviation inspector on a training run. The longer flight carried pilots who were maintaining flight hours. No cabinet ministers sneaking around on the public dime (this time).

General Dynamics is back at it: The company that built Saudi Arabia billions of dollars worth of light armoured vehicles is now building “combat support vehicles” for the Canadian military. The first of the batch should roll off the line in December. As you can see, they resemble mechanized warthogs.