This week's 338Canada projection: Is the NDP on the verge of collapse?

Philippe J. Fournier: In the best case scenario given the latest numbers, the NDP barely wins more than half of its 2015 seat total. Worst case, it risks losing official party status. 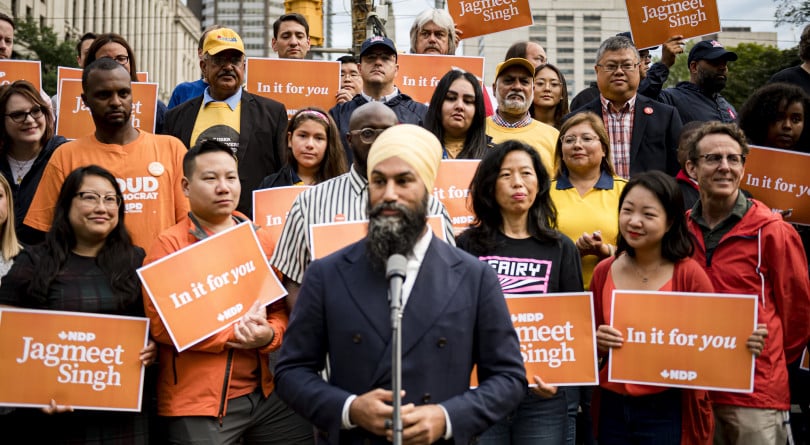 September is upon us. Back to school is in full swing, football season and NHL training camps are soon getting under way, your favorite cafés are probably serving pumpkin spice lattés… and, with Canada’s 43rd federal general election on the horizon, you will probably get a visit or a phone call from your local candidates hoping to sway your vote their way.

Voting day is scheduled for Oct. 21, a full seven weeks from today. With 49 days and several debates to go, we present today the state of the race according to the available data.

Let’s recap the past week:

Consider the following graph. The coloured bars are the 338Canada popular vote projection confidence intervals and the black dots are the latest polls’ results: 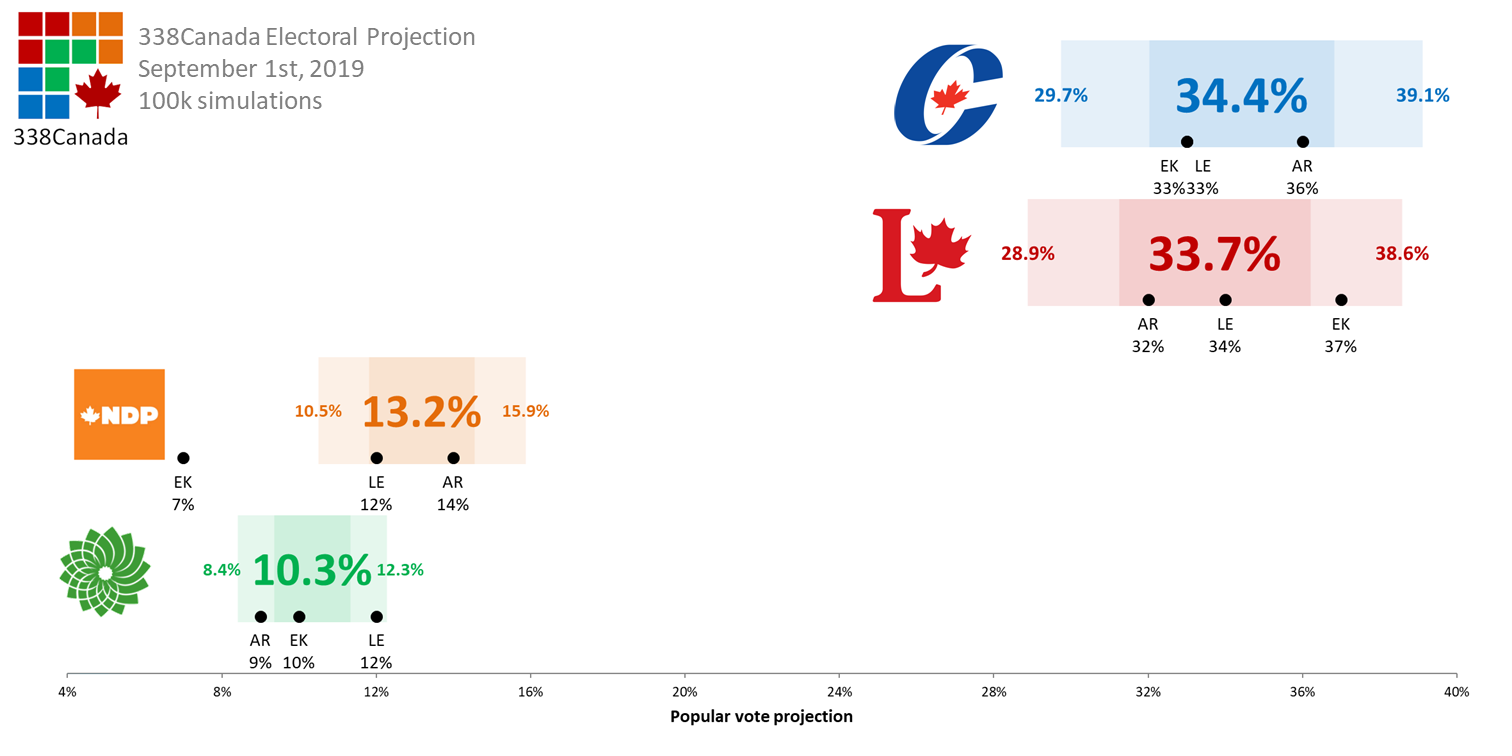 When we calculate the weighted average of all the latest polls, we see that the Conservatives and Liberals are essentially tied at 34 per cent apiece. As we will see below, according to current ranges of numbers, a near-tie vote between the Liberals and Conservatives would give an edge to the Liberals in terms of seats.

The NDP slips to an average of 13 per cent. While we notice that EKOS may be somewhat off on its NDP figure, Léger (12 per cent) and Angus Reid (14 per cent) generally agree on where the NDP stands—almost seven points lower than its 2015 result.

The Green Party remains stable with an average of 10 per cent nationally. Maxime Bernier’s PPC stands at 2.9 per cent.

In Quebec, the Bloc québécois climbs to 20 per cent support (4.7 per cent nationally).

Seat-wise, the Liberals climb to an average of 165 seats, just 5 seats short of a majority. The Conservatives are not far behind with an average of 142 seats. Notice however how the confidence intervals overlap significantly: 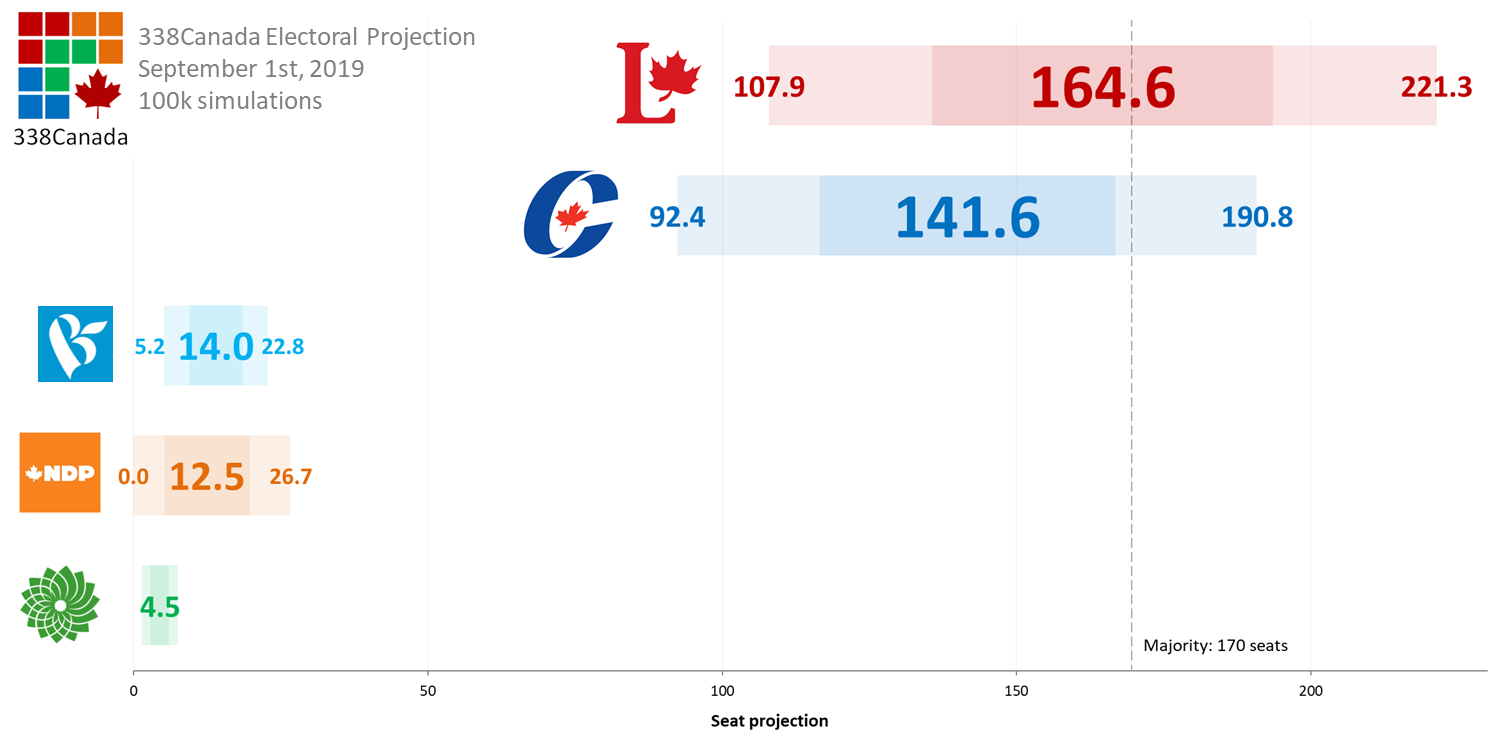 Strong numbers for the Liberals in Canada’s two most populous provinces, Ontario and Quebec, partly explain why the LPC holds the advantage over the CPC despite polling similar levels of national support. For the Conservatives, polling at or above 60 per cent in Alberta may inflate their national figures, but it doesn’t win them any more seats (the CPC is projected ahead in all 34 Alberta seats).

For those wondering why the confidence intervals are so wide, the reasons are two-fold: 1) Polls do not agree on where major parties stand; just last week, we saw the Angus Reid Institute with a 4-point CPC lead, EKOS with a 4-point Liberal lead, and Léger somewhere in the middle; 2) The model accounts for the possibility of polls being wrong by a few points. The coloured bars’ extremes are the absolute worst—and best-case—scenarios or each party. The extremes are not as likely to occur as figures near the middle.

The Bloc québécois currently has the third highest projected seat average with 14, above the NDP, which falls to an average of 12.5 seats. Poor numbers for the NDP have been piling on lately and one wonders where this could lead the party. Take another look at the NDP projection’s confidence intervals: In the best case scenario according to current figures, the NDP would barely win more than half of its 2015 seat total.

The worst case scenario? Barely a handful of seats. 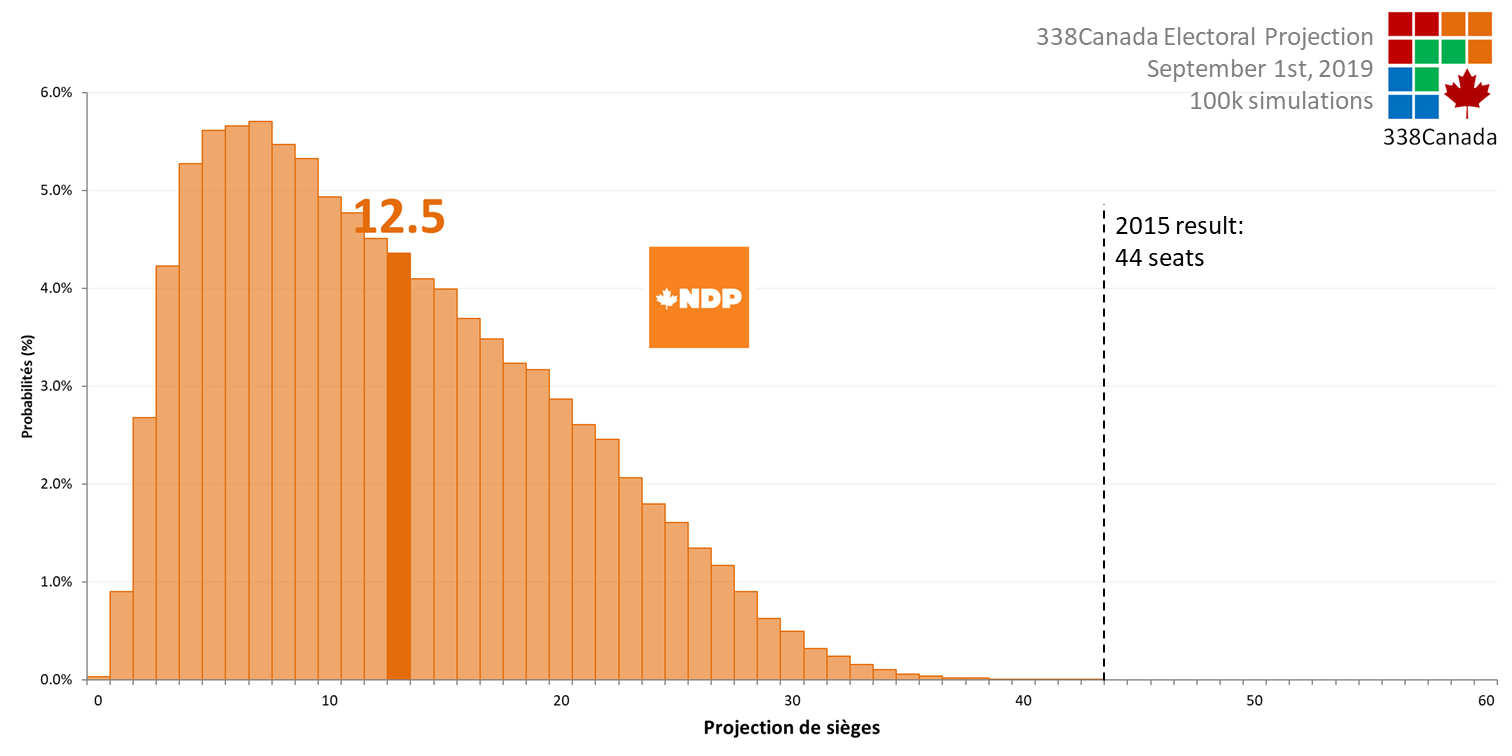 The higher the bar, the more likely the seat result is, meaning that the NDP is currently more likely to win 5 to 10 seats than 10 to 15. If the NDP doesn’t turn things around soon, losing official party status would not be an implausible scenario.

When we compile the results of all general election simulations, we see that the Liberals now hold the greatest odds to win the most seats (66 per cent): 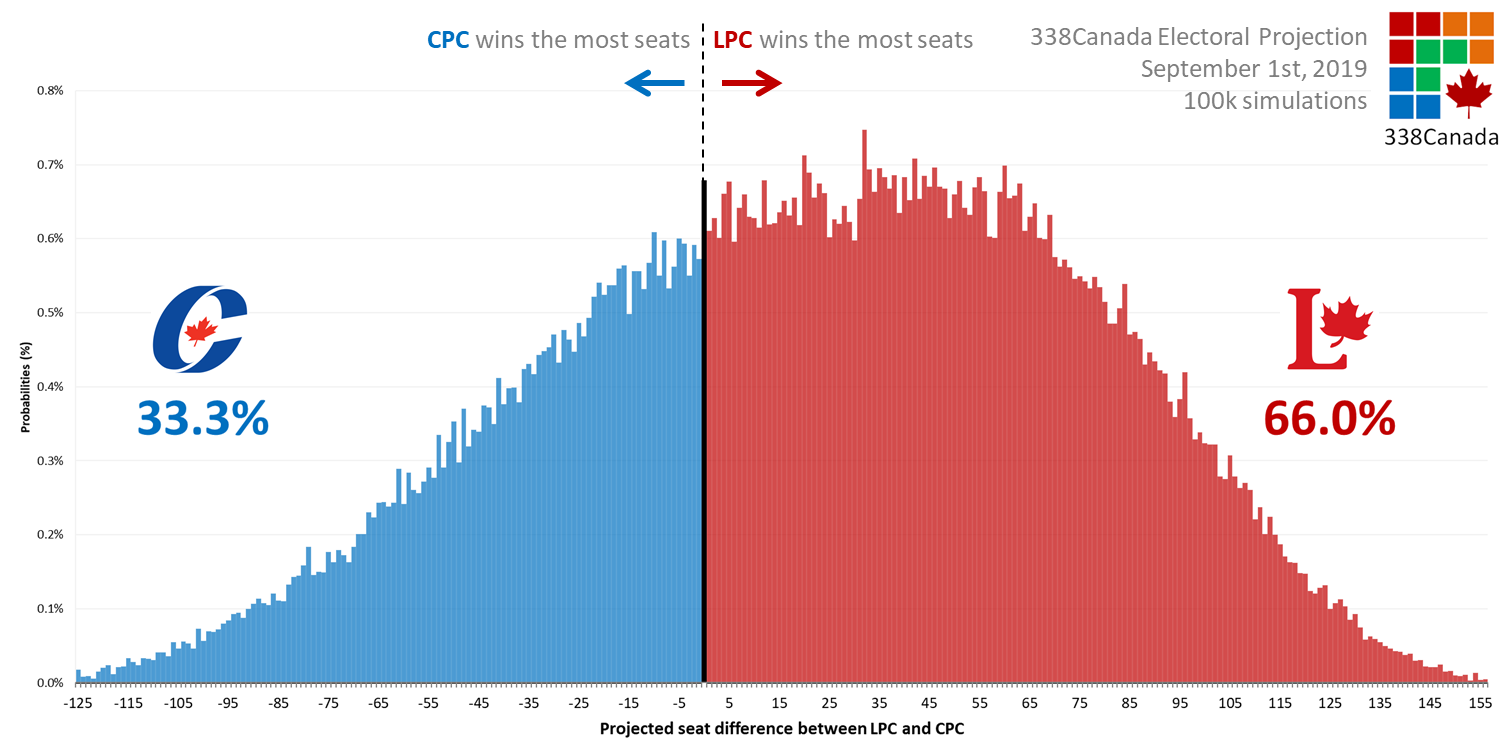 We expect Justin Trudeau to visit Governor General Julie Payette sometime next week to ask her to dissolve the 42nd legislature.

We will follow the numbers closely all the way to election day.