Tom Green is here to save the Chateau Laurier 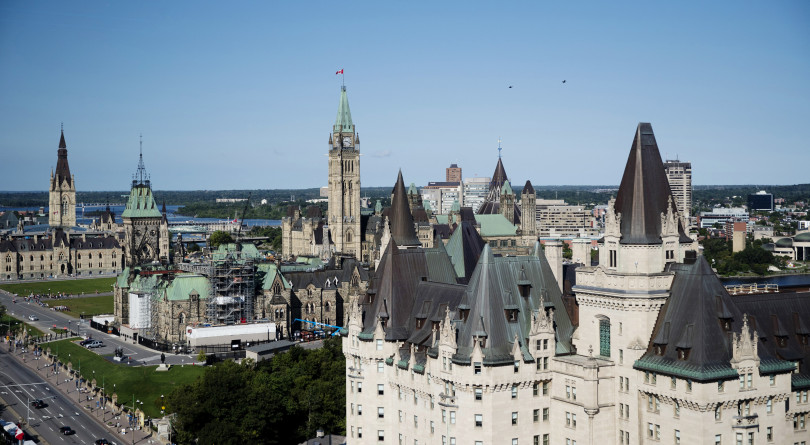 In the office pool of Things That’ll Make Ottawa Melt Down This Summer, anyone bet on a proposed expansion of the Chateau Laurier? The fate of the landmark hotel, which might soon have a radiator-shaped goiter jutting out its back end, plunged Ottawa city council into disarray and attracted the likes of Ottawa hometown hero Tom Green to team preservation. Stephen Maher, writing in Maclean’s, blamed the whole fracas on Mike Harris and his pro-suburb bent. [Tom Green!]

Suburban Toronto voters made Rob Ford mayor of Toronto. Suburban Ottawa voters elected councillors who are letting a developer destroy an Ottawa landmark. This is not how our cities should be organized. Suburban voters should run their own affairs and let city people do the same. [Maclean’s]

Alberta correspondent Jason Markusoff followed the annual summit of Canada’s premiers, which he reminds us typically feature “exquisitely beige communiqués about premiers steadfastly committed to action—some day!” What Markusoff found was a rookie Prairies premier in search of a posse he couldn’t quite stitch together. [Maclean’s]

For Liberals, the hits keep on coming. Two days ago, a west-end Ottawa MP escaped punishment for breaking federal ethics rules. Yesterday, a Global News scoop gave the party another headache. Turns out, say sources, the RCMP had a file on Joe Peschisolido, a suburban Vancouver MP whom the Mounties suspected was “affiliated with” secretive real-estate deals that involved Asian organized crime. Predictably, the Tories want Peschisolido (a former Canadian Alliance MP!) to get the boot from caucus. [Global News]

From the Liberal greatest hits: Foreign Minister Chrystia Freeland, speaking to reporters during a global conference on media freedom she’s co-hosting in London (U.K.), shared a withering appraisal of new work from a former cabinet colleague. Recall John McCallum’s comments in the South China Morning Post, in which he declared he’d advised Chinese officials to ease up on Canada, lest they inadvertently elect an unfriendly Tory regime. Freeland, sensing the political sensitivity of remarks such as those, called them “highly inappropriate.” [Canadian Press]

Now it’s personal: Justin Trudeau, who invoked his status as a former teacher, not-so-subtly accused Doug Ford of making life worse for the Trudeau kids. Speaking at the Canadian Teachers’ Federation AGM yesterday, the PM called the Ontario premier’s education cuts “frightening,” and said he’s “very, very worried” about kids in the province—including his own. Trudeau appears to be in election mode long before the writ drop. His evening rally in Edmonton was styled a “campaign event.” [CBC News]

Crown-Indigenous Relations Minister Carolyn Bennett is in Winnipeg bright and early this morning. She’ll be at the Manitoba Métis Federation, where the order of the day is highlighting a “first-of-its-kind initiative.” [Bennett’s deets]

Just a bit to the east, Labour Minister Patty Hajdu will be in Thunder Bay—coincidentally her own riding and the very city where Bombardier’s announced layoffs set off a firestorm between Queen’s Park and Ottawa—to announce “support” for youth employment. [The Hajdeets]

If you visit macleans.ca today, you’re likely to see our cover stories—and big package—on climate change. Be sure to check out John Geddes’s detailed look at Canada’s worst-case scenarios, Alanna Mitchell’s hopeful glimpse at a low-carbon (non-apocalyptic) future, and our editorial on why we went big on climate reporting. [Be scared, Be optimistic, Why this matters]

Wear your seat belts: Thirty-seven people suffered injuries, nine of them serious, when their Air Canada flight, en route from Vancouver to Sydney, Australia, hit major turbulence that rocked the 737 and diverted it to Honolulu. Said one passenger: “It was like a second, but it was enough to  see everybody jump. Some people that weren’t strapped in, you saw them rise in the air and hit their heads on the roof and everything.” Fight turbulence, folks. Buckle up. [CBC News]