Trans Mountain wins in court, but the fight's not over 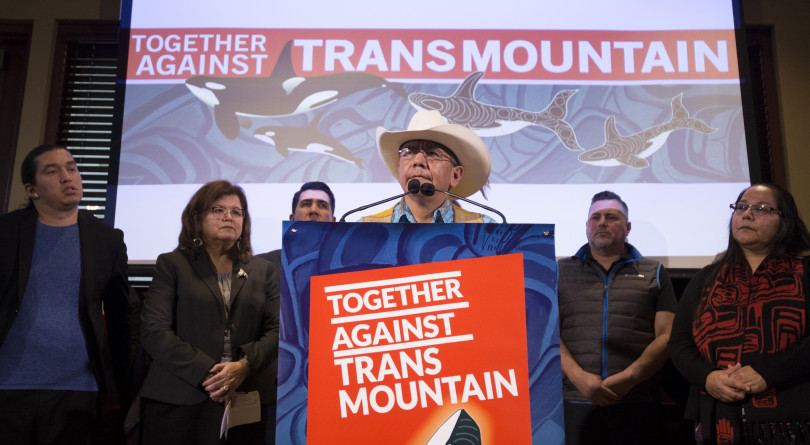 Chief Lee Spahan of the Coldwater Indian Band speaks as he and other Indigenous leaders comment on the Trans Mountain pipeline decision by the Federal Court of Appeal in Vancouver B.C, Tuesday, February 4, 2020. (Jonathan Hayward/CP)

The long and winding saga of the Trans Mountain pipeline expansion found its way to Federal Court in Ottawa, where justices sided with the government’s argument that it properly consulted with Indigenous people whose lands overlap the proposed route. Read the whole ruling here, in which the judges call the consultation “anything but a rubber-stamping exercise” that produced meaningful conditions tied to the project’s approval.

The Trans Mountain pipeline and the end of the ‘veto’ fallacy: Maclean’s Alberta correspondent Jason Markusoff explains that the decision “finally exorcised the misbegotten spirit of a Justin Trudeau comment at Calgary’s Petroleum Club on Oct. 30, 2013, which he made months after winning the Liberal leadership: ‘Governments may be able to issue permits, but only communities can grant permission.'” The four nations fighting the feds may yet pursue any and all legal recourse. But whatever happens in the courts, Markusoff writes, the resistance won’t end there:

The final true battle will be protest and civil disobedience, with Standing Rock in the North Dakota and the Coastal GasLink pipeline fight in Wet’suwet’en territory as likely models. Expect cross-border solidarity to bolster the protesters’ numbers, as it did at Standing Rock, while the RCMP and government authority response in the GasLink fight may provide a preview of enforcement against Trans Mountain resistance.

(Fun fact: John B. Laskin, one of the justices whose name is on the TMX decision, is the nephew of former Supreme Court chief justice Bora Laskin.)

Yesterday, the Conservatives hoped to dominate House business with an opposition motion to condemn the Parole Board of Canada for granting parole to a convicted murderer who had a history of abuse. While he was out on day parole last month, Eustachio Gallese allegedly killed Marylène Levesque, a sex worker in Quebec City.

Tory MP Arnold Viersen derailed debate in the House when he responded to a question from NDP MP Laurel Collins, who urged the Conservatives to listen to sex workers when they advocate for their profession. In reply, Viersen inserted his foot completely into his mouth. “I would just respond to that by asking the honourable member across the way if it’s an area of work that she has considered, and if that is an appropriate—” Cue the jeers from across the aisle. (Viersen later apologized.)

The NDP ended up pledging support for the Tory motion. The House will vote on it later today.

Everybody calm down: The House was supposed to celebrate a brief foray into multi-partisanship yesterday. Justice Minister David Lametti and Rona Ambrose, the former interim Tory leader, announced the Liberals would re-introduce a bill first championed by Ambrose that would mandate judges undergo training on sexual assault law. The legislation was supposed to receive all-party support.

It got complicated. Conservatives initially took heat for denying the bill unanimous consent, which would send it on to the Senate. But a spokesman for Andrew Scheer soon clarified that his party doesn’t oppose the bill—they just want to expand it, in the spirit of their opposition motion, to include the parole board and parole workers. Multi-partisanship salvaged.

There seemed to be early indications after the downing of Flight 752 that Iranian authorities would invite international investigators to assist in the analysis of black box data. That enthusiasm has, apparently, waned. The multinational group pushing the Iranians to cooperate say those black boxes still haven’t been released—and a “readout” from the groups’s most recent meeting hints at a breach of the treaty that governs aircraft investigations. Canada is taking it up with the International Civil Aviation Organization.

If you find yourself scanning the Books of Remembrance in West Block today, you’ll see Wallis McBurnie Burden‘s name on the ninth page of the Korean War book. Burden died on Oct. 2, 1952, after his ship, HMCS Iroquois, was struck by shells fired from North Korean shore batteries. The three sailors who perished that day were the only Royal Canadian Navy crew killed in action during the war.