Can Justin Trudeau fix the vote with electoral reform?

Justin Trudeau’s Liberals want to change the way parliamentarians are elected. But who really wins with electoral reform? 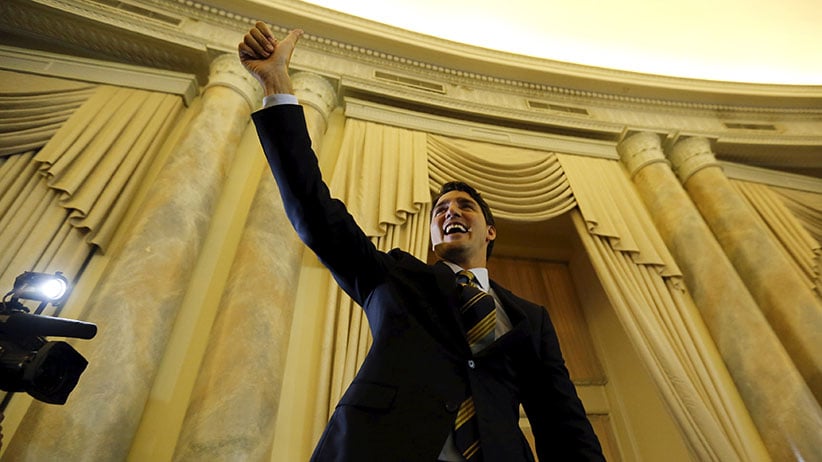 Only a few years ago, the movement to scrap Canada’s old winner-take-all system for electing members of Parliament and provincial legislatures seemed to have run out of steam. Between 2005 and 2009, in three separate referendums—first in Prince Edward Island, then in Ontario and, finally, in British Columbia—electoral-reform proposals all went down to defeat. In Britain, voters in a 2011 referendum also rejected a chance to overhaul the traditional “first-past-the-post” system, in which the candidate who attracts the most votes becomes MP and the rest get zilch. If the traditional way was still good enough for the birthplace of the Westminster model, any newfangled alternatives didn’t appear to stand a chance.

But Justin Trudeau has reignited debate about changing the way Canadians select their federal representatives. In a sweeping speech on the theme of “fair and open government,” the Liberal leader promised last week that, if he wins this fall’s election, he will convene an all-party committee to study the options, then enact some replacement for first-past-the-post within a mere 18 months. In an interview with Maclean’s, Trudeau left no doubt that Liberal strategists have absorbed the hard lesson taught by the string of referendum losses suffered by advocates of new ways of voting. “We’ve committed to strong, open consultations,” he said. “But it hasn’t gone unnoticed by people that electoral reform has had a lot of trouble getting through plebiscites.”

Reaction to his vow to put an end to the only way Canadians have ever chosen their parliamentary representatives was surprisingly muted. Perhaps that was because Trudeau’s electoral-reform pledge came bundled with no fewer than 31 other promises, covering everything from banning partisan federal ads, to updating the way question period works, to appointing equal numbers of women and men to his cabinet. Any one of these platform planks is worthy of heated argument. None digs as deeply, though, into the roots of Canadian political life as the prospect of selecting MPs in some novel way.

Asked why he thinks the time is right for reform, Trudeau pointed to declining voter turnout (down to 61 per cent in the 2011 federal election, from 75 per cent of eligible voters in 1988) and discontent over the fact that Prime Minister Stephen Harper’s Conservatives managed to win 54 per cent of the seats in the House with just 39 per cent of the popular vote in the last federal election. Trudeau wouldn’t say, however, what sort of reform he’s leaning toward. Instead, he proposed a wide-open “national engagement process” to study ideas “such as ranked ballots, proportional representation, mandatory voting and online voting.”

The items on that short list of reform ideas can’t be assigned equal weight. Mandatory and online voting are intriguing in their own right, but they could be made part of just about any electoral system. That leaves ranked balloting and proportional representation (PR) as Trudeau’s main options for replacing first-past-the-post. Experts point out that those two models don’t really have much in common. Far from being variations on a single reform theme, they are entirely separate propositions, each designed to remedy a different perceived problem.

It was a version of PR that Ontario voters rejected in the province’s 2007 referendum. The proposal then was to have voters cast two votes, one for their local member and another for a political party. The legislature would have been made up of some members representing their ridings, in the familiar way, and others, their party’s share of the vote. In B.C., voters rejected a version of preferential voting in 2009. Under that proposal, voters would have ranked candidates on the ballot, with their second and third choices being counted only if their first-choice candidates were dropped from the ballot due to lack of support. Tallying would go on in this way until a winning candidate had a majority of the votes.

Jonathan Rose, a political science professor at Queen’s University in Kingston, Ont., was the expert adviser to the citizens’ assembly that devised the PR system put to a vote in Ontario. “Trudeau has picked two very different models,” Rose says. “I think it’s a bit confusing; they are not equivalents.” He says PR is meant mainly to solve the problem of small parties failing to gain seats that reflect their share of the overall vote. Ranked balloting, also called preferential or alternative voting, is designed, he says, to “convey legitimacy” on the ultimate winner in any constituency.

Rose says the experience in Australia, which uses a version of ranked balloting, shows that the candidate who gets the most first-place choices ends up winning most of the time anyway, so election outcomes are not much different than they would be under first-past-the-post. For that reason, he doubts ranked balloting will attract as much support among Canadians as some version of PR. In fact, it’s already the preferred option of Fair Vote Canada, a lobby group for electoral reform, and is the official policy of NDP Leader Thomas Mulcair and Green Party of Canada Leader Elizabeth May.

NDP MP Craig Scott, Mulcair’s critic for democratic reform, says the Liberals have in the past shown a pronounced and, in his view, opportunistic, preference for ranked balloting. Scott contends that a party occupying the centre of the ideological spectrum might strategically hope to gain more second-choice votes than might its rivals on the left or right. In other words, he suspects Liberals will choose ranked balloting in a bid to gain a built-in advantage in future elections. “The fact is, if there’s a party that stands for a lot, and you can never quite tell what it stands for, then it’s going to collect votes from the right and a few votes coming from progressives,” he says. “And that’s why, frankly, they prefer it.”

But Trudeau says a similar suspicion is cast over the NDP and Green preference for proportional representation. As parties whose popular-vote shares have historically been higher than their proportion of seats in the House, they have a vested interest in a voting system that would ﬁx that problem. “Rightly or wrongly, that’s the perception people tend to have [about] positions like this,” Trudeau says. “We want to make sure there is all-party, open debate, discussion drawing on experts looking at international models, making sure that we’re actually digging into what’s the best for Canada [in future]—and not what’s best for a particular party that happens to wield power at this particular moment.”

The Tories, however, argue that the provincial referendums have already proven that Canadians are content to stick with first-past-the-post. “Every time Canadians have voted on this, they chose to keep the current system,” said Minister of Employment and Social Development Pierre Poilievre, who also has responsibility for democratic reform in Harper’s cabinet. “We will continue to respect the democratic will of Canadians.”

But proponents of electoral reform refuse to accept the conclusion that the provincial votes settled the matter. They stress that British Columbia actually held two referendums. In the first, conducted in 2005, the Yes side fell only 2.3 points short of the 60 per cent threshold set by the provincial government for bringing in preferential voting. The outcome was so close that a second referendum was held in 2009, but the Yes camp faltered, securing less than 39 per cent support on its second try. Not surprisingly, critics of first-past-the-post tend to point to that first result as a true sign of underlying discontent with the old system.

Related:How to fit in and stand out in Quebec

In Ontario, only 37 per cent of voters supported mixed-member proportional representation in the 2007 referendum. But Marie Bountrogianni, who was responsible for the referendum as former Liberal premier Dalton McGuinty’s minister for democratic renewal, says reform would stand a better chance of gaining popular approval today. Bountrogianni, now dean of continuing education at Toronto’s Ryerson University, says many more Canadians tend to go online for information now, which would make it easier to explain a new way of voting and to build support. “It was complicated to me, and I was living and breathing it for two years,” she says of the proportional representation model proposed in Ontario back in 2007. “So I think there would have to be an education process of some sort, and then a vote.”

That last part could end up being the sleeper issue in any new push for electoral reform. “If you’re going to totally change the election system—and I’m a Justin Trudeau supporter—I think it would have to be a referendum,” Bountrogianni says. Rose agrees. “I think it shouldn’t be a blue-ribbon panel deciding this, or politicians,” he says. “Whatever decision is reached, it should be put to a national referendum for approval.” So far, Trudeau doesn’t see it that way. When it comes to changing the way Canadians vote, a big part of the battle to come could be over whether they should get to vote on it.