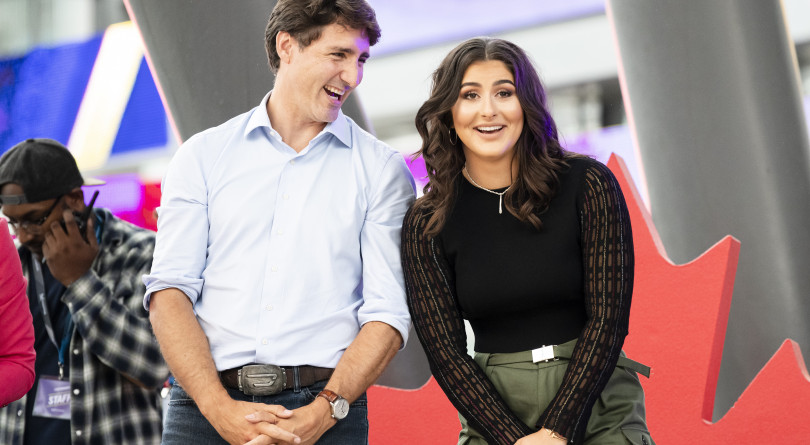 Liberal Leader Justin Trudeau is seen on stage with Bianca Andreescu as she takes part in the SheTheNorth rally after winning the US Open, in Mississauga, Ont., on Sunday, Sept. 15, 2019. (Christopher Katsarov/CP)

Together apart: Canada’s pollsters are coming into closer alignment when it comes to the race between the Liberals and Conservatives, with the two parties tied at 34 per cent in the popular vote, but the polls remain far apart from each other when it comes to how the NDP is faring, writes 338Canada‘s Philippe J. Fournier. His latest seat projection, factoring in polls from the last week, gives the Liberals an average of 169 seats compared to 139 for the Conservatives — though many of the seats the Liberals lead in are considered far, far from safe. (Maclean’s)

Swayed: The polls don’t yet reflect the performances (or, ahem, lack thereof) of the leaders in last week’s Maclean’s/Citytv debate. In the meantime an albeit unscientific Facebook survey taken right after the debate found that one-in-10 of the 3,200 people who responded said their voting intentions changed as a result of what they heard from Andrew Scheer, Jagmeet Singh and Elizabeth May. (Maclean’s)

(To read what the leaders said, here’s a full transcript of the debate.)

Look who’s not talking: Speaking of leaders not speaking, it’s not gone unnoticed that since the election campaign got underway, Justin Trudeau has excelled at not answering many questions about his policies and promises. It wasn’t just his decision to skip the first English-language debate. Consider the weekend: Trudeau spent Saturday shaking hands and taking in a rodeo in Quebec and then traveled to Ontario to chum it up with tennis star Bianca Andreescu, all of it without taking questions from reporters.

Mixed-up, muddled-up world views: Whether the leaders were arguing about China, Israel or Canada’s role in NATO during the #FirstDebate, their responses lurched from platitudinous to downright bizarre, writes Terry Glavin:

The great thing about Green Party leader Elizabeth May is that when she’s dealing with an issue she actually knows something about, she’s a wonder to behold. In Thursday evening’s Maclean’s—Citytv federal leaders’ debate, May proved herself to be a fierce and formidably well-informed champion of the cause of meeting Canada’s commitments to the greenhouse-gas emissions targets in the 2016 Paris Accord. Neither Conservative Party leader Andrew Scheer nor the New Democrats’ Jagmeet Singh could lay a glove on her. She cleaned their clocks.

But when the evening turned to the foreign policy portion of the debate, May went sideways. She wasn’t alone. (Maclean’s)

Sorry does it: Conservative candidates can have given voice to kooky conspiracy theories in the past or posted homophobic and racist tweets, but so long as they’ve apologized, they’re good to go — to a point. Scheer explained his position to reporters after a string of revelations about Conservative candidates’ past comments. “I accept the fact that people make mistakes in the past and can own up to that and accept that,” he said. Not that it’s a blanket forgiveness policy: “Obviously it depends on other aspects, including context.” (CBC News)

Among the candidates Scheer has had to defend: Mississauga-Streetsville candidate Ghada Melek, who in the past has tweeted about comments deemed homophobic and Islamophobic and shared articles and videos making outlandish claims, like that the Catholic church is trying to depopulate the world using chemical and biological methods. She’s said sorry, and Scheer has accepted her apology, but the Ontario Progressive Conservatives in 2016 were less understanding. A vetting official for that party called Melek’s recommendation a “strict red light. …  There are many anti-gay/LGBT and even sterilization posts that make this candidate extremely controversial and problematic. I don’t think I can stress enough that this candidate should not be approved.” (CTV News)

Scheer wasn’t entirely on the defensive. While swinging through B.C. he announced what he called a “universal tax cut” that would save the average single taxpayer $444 and two-income couples with average salaries $850 a year. It would, according to economist Trevor Tombe, actually be more of a middle class tax cut than the “middle-class tax cut” proposed by the Liberals in 2015. (Canadian Press)

This was the third tax measure from the Conservatives, after pledging to revive the public transit tax credit and introduce a maternity and parental leave tax credit. The party asked the Parliamentary Budget Officer to cost each promise, and all told the taxes will cost just shy of $60 billion over the next decade. Scheer says even with the cuts, and his commitment to increase health and education funding by three per cent a year, he’ll still be able to balance Canada’s books “in a reasonable time.” The question of how he’ll do that will have to wait until the Conservatives release their full platform.

Follow the leader: The leaders will be spread out across the country today. Trudeau will be touring through southwestern Ontario (and may break his streak of avoiding media questions —  stay tuned), Scheer resumes his visit to B.C. before heading to Calgary in the afternoon while Jagmeet Singh will keep his focus on Quebec. Elizabeth May will also be in southwestern Ontario while Maxime Bernier heads for New Brunswick. (Canadian Press)

Bernier argued his Peoples’ Party are “smart populists” in a wide-ranging interview on CTV’s Question Period. Bernier talked about his savage attacks on 16-year-old climate activist Greta Thunberg for which he later offered a non-apology apology (“When she is saying and I quote her ‘everyone must panic and feel her fears’ I think that is not responsible … there’s no proof that tomorrow it would be the end of the world if we didn’t do anything on climate change”) and why his party isn’t anti-immigrant: “We just want fewer immigrants but we want more of them being economic immigrants.” (CTV News)

Over on Global’s West Block party strategists duked it out over Trudeau’s handling of the latest SNC-Lavalin revelations, and his decision to skip last week’s debate. Liberal strategist Richard Mahoney defended Trudeau’s absence: “Canadians are going to have a chance to see him at least three times beating the other leaders. That’s a lot, and it’s probably more than we traditionally have.” (In 2015 Trudeau took part in five debates; three in English and two in French). (Global News)

While this campaign has already seen some flubs and missteps, the damage is unlikely to be lasting this early in things, according to Scott Reid, a political analyst and former director of communications to prime minister Paul Martin. “We’re still on the,’It’s OK to go to the fridge and get a beer’ part of this game and it’s going to get more interesting from here on in.” (While you’re up, grab some popcorn.) (CBC News)