Re-election means never having to say you're sorry

Paul Wells: The Trudeau Liberals return confirmed in their beliefs and comforted by big numbers in Central Canada. The introspection is over. 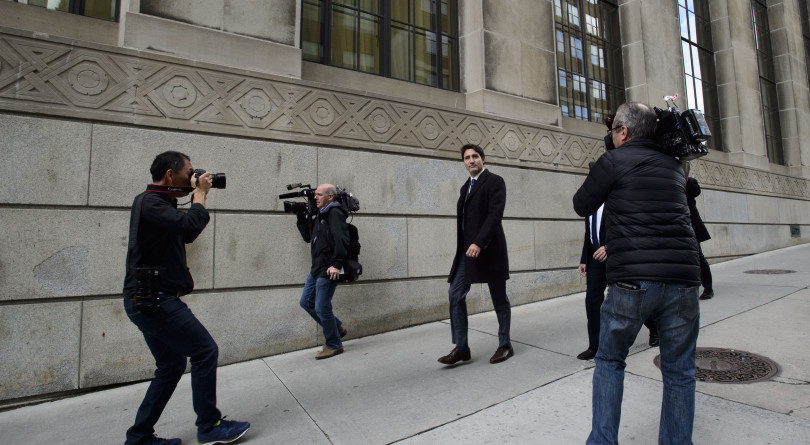 Trudeau makes his way from a press conference at the National Press Theatre in Ottawa on Oct. 23, 2019 (THE CANADIAN PRESS/Sean Kilpatrick)

I’ve got a hunch that when the federal Liberal caucus meets, observers will be surprised, even taken aback, by the jovial tone among Liberals. And an emerging theme of federal politics in months to come will be the scale of Justin Trudeau’s electoral triumph.

Now there’s a word you don’t hear often. Triumph. It’s not one that came automatically to any observer on Oct. 21. It sure isn’t how the results looked to me, at first.

You know the results as well as I do: The Liberals won 20 fewer seats than in 2015, falling from 177 to 157, losing their majority in the House of Commons. They lost a million of their 2015 votes. They lost the popular vote to Andrew Scheer’s Conservatives and it wasn’t close: the Conservatives’ edge was nearly a quarter of a million votes. The Liberals were shut out in Alberta and Saskatchewan. Their share of the popular vote, at 33.07 per cent, is the lowest ever for a governing party in Canada. The Bloc Québécois is resurgent, there’ve been Western separatist meetings, it’s all pretty chastening.

So why isn’t Trudeau chastened? Because the world looks different from where he’s sitting. And all the more so from where most of his caucus sits.

That’s a 98 per cent hold rate in the two largest provinces.

As my colleague Philippe J. Fournier has pointed out, of 144 ridings where the Conservatives lost ground, 139 are in Quebec and Ontario. A large majority of returning Liberal MPs increased their vote share in their ridings this year over 2015. Declining Conservative vote and increasing Liberal vote means the margin of victory got wider. The squeakers of 2015 became romps in 2019.

Think about that in context. After the India trip and SNC-Lavalin and the Aga Khan vacations; after constant roadblocks on the road to a new pipeline; after Trudeau was scolded on the world stage by Greta Thunberg; after the historic collapse of provincial Liberal parties in Ontario and Quebec; after multiple adventures in the land of blackface—after all that, most Liberal MPs had an easier time getting re-elected in 2019 than they did getting elected in 2015.

No wonder a note of triumphalism is creeping into some Ontario Liberals’ rhetoric. Since election night, Don Valley East MP Yasmin Ratansi has tweeted twice, first to mock “the Scheer nonsense lies” and then to call “mistruths” a “conservative trait.” In Spadina-Fort York, Adam Vaughan is calling for municipalities to be removed from exclusive provincial jurisdiction. Liberal supporters who aren’t bound by caucus constraints are even more exultant; here’s law professor Amir Attaran thanking “western Canada” for pushing the Trudeau government to a more environmentalist stance.

Which brings us from the realm of electoral math into the more consequential realm of policy.

For a year I depicted the 2019 campaign as a referendum on carbon taxes. I had the enthusiastic cooperation of federal and provincial Conservative politicians and political staffers, who pointed out that Hamish Marshall had already won a literal referendum on taxes. Scheer and four provincial Conservative leaders, each in a different city, posed for a Maclean’s cover story as “The Resistance” to Trudeau carbon taxes. Colleague Jason Markusoff overheard Stephen Harper give a speech with a ringing applause line: “Let the other guys do a carbon tax, because we can all win the next federal and provincial elections on that issue alone.”

If, after all that, Trudeau’s Liberals had wound up with fewer seats than the Conservatives, Jason Kenney and Stephen Harper and Andrew Scheer would be calling it a ringing public condemnation of the Liberals’ environmental policy. Since the opposite happened, the anti-carbon tax coalition is in a bit of a retreat. First Saskatchewan premier Scott Moe demanded Trudeau “cancel the federal carbon tax.” Only nine days later, Moe’s tone had changed markedly: “I am asking you to place a one-year pause” on the carbon tax scheme, he wrote mildly in a new letter to Trudeau, “while Saskatchewan and federal officials work together to re-evaluate Saskatchewan’s carbon emissions plan.” Perhaps Moe was influenced by New Brunswick’s premier Blaine Higgs, who was more agile in adopting a conciliatory tone after Trudeau’s re-election.

Perhaps the surest sign of the Trudeau circle’s confidence is the news that Katie Telford is staying on as his chief of staff. The news was delivered first to a TVA reporter who’d been told all sorts of things about a nasty work environment at the PMO, the sort of rumours that get leaked when a faction in internal disputes begins to realize it’s losing. Indeed, the “transition team” preparing a second Trudeau government is perhaps less remarkable for who’s on it—perennial Edmonton Liberal stalwart Anne McLellan and current Canadian ambassador to France Isabelle Hudon—than for who’s actually running it, Telford, along with Privy Council clerk Ian Shugart.

Again, there’s no part of the Trudeau agenda since 2015 that Telford hasn’t been closely involved with. Everyone grows, learns and adjusts. Course corrections are always possible. But if this were a chastened prime minister badly rattled by the election returns, he probably wouldn’t be keeping his (surviving, non-Gerry Butts) right hand in place.

And so we close, for now, with stories like this one in the Globe, about the composition of a new Trudeau cabinet. Don’t bank on every name in it; there’s plenty of time for names to change or be added before a public announcement. But the general direction is that of an environmentalist party that’s had its environmentalism endorsed by enough voters Canada-wide, and by increased margins in Central Canada, and whose opposition includes enough MPs on its activist left, that it needn’t yet fear the official opposition, squabbling and second-guessing, on its right.

This government will feel confirmed in its beliefs, comforted by the numbers, vindicated against any criticisms the likes of me might have had to offer. It will be determined to deliver more of the same. It will “green the economy” the same way it “saved newspapers” and “launched superclusters,” by hosing billions of dollars hither and yon. It will execute an end run around The Resistance by working with big-city mayors and big business. If you’re in the market for a new career, you need to hurry up and hang out your shingle as a clean-tech consultant, because this government just loves to aim the money hose wherever the right kind of hired expert points.

For good or ill, and it will often be for both, Justin Trudeau’s post-election bout of introspection is over. He’s delighted to discover he was right all along. And everyone around him agrees! He’s not cowed, chastened, burdened by complexes or haunted by voices. He’s been surfing in Tofino. And now he’s back—and on the march.