Politics Insider for April 24: The PM says soldiers shouldn't be taking care of seniors, a Tory MP takes on Theresa Tam (and loses) and MPs are meeting on the phone every single day 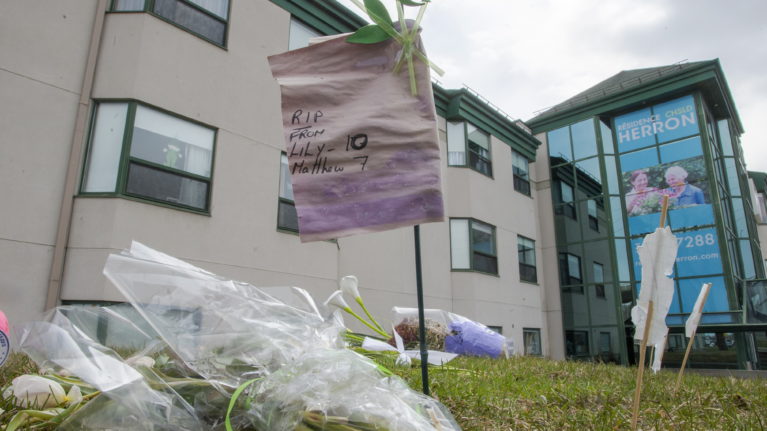 Flowers and notes for loved ones are seen at a makeshift memorial in front of the CHSLD Herron seniors residence Wednesday April 22, 2020 in Dorval, Que. (Ryan Remiorz/CP)

As many long-term care homes lose residents to deadly coronavirus outbreaks, Justin Trudeau lamented Canada’s treatment of its elders from his lectern at Rideau Cottage. “If you’re angry, frustrated, scared, you’re right to feel this way,” he said. “We need to do better because we are failing our parents or grandparents, our elders, the greatest generation who built this country.”

Canadian troops had already been dispatched to old folks’ homes in Quebec before the feds agreed to send them to Ontario facilities, too. “In Canada, we shouldn’t have soldiers taking care of seniors,” said the PM, who alluded to a future in which Canada faces “tough questions about how it came to this.” (Read Trudeau’s full remarks here.)

The PM’s big announcement of the day was $1.1 billion—almost $750 million of which is reportedly new funding—for a medical and research strategy to fight COVID-19. Trudeau also appointed a task force that’ll study immunity to the virus. It’ll include David Naylor, a medical researcher and former University of Toronto president who chaired a national advisory committee on SARS that made serious recommendations on how to fight viral outbreaks—and led to the creation of the Public Health Agency of Canada (PHAC).

“Does she work for Canada or China?” That was how Tory leadership candidate Derek Sloan, in a Facebook video, phrased an inflammatory rhetorical question about the allegiance of Theresa Tam, Canada’s chief public health officer. Sloan’s current leader, Andrew Scheer, refused to address questions about Sloan’s comments at a morning press conference. Into that void walked the PM, who stood up for Tam: “Intolerance and racism,” he said, “have no place in our country.”

Sloan’s caucus colleague, 21-year-old Eric Melillo, snapped back that “giving a platform to extreme theories is completely out of line and does not represent our party.” As for Tam, she told a news conference she’s a “pretty focused person” who works probably 20 hours a day.

The next fiscal security blanket? Canada’s cities, on the verge of disaster as they deliver crucial services in the face of plummeting revenues, are begging for help from the feds to the tune of $10 billion. To take one of thousands of examples, the Toronto Transit Commission has seen ridership plunge 85 per cent in the age of physical distancing—and 1,200 laid off employees are on the losing end of that equation. Trudeau didn’t address cities’ demands directly, but that doesn’t mean they’re not next down the list.

Under-CERB’d Canadians: The Canadian Centre for Policy Alternatives’ latest analysis claims the government’s incremental approach to expanding the Canada Emergency Response benefit is excluding 1.4 million Canadians who need the money this month but don’t qualify for the CERB or EI. By the CCPA’s calculations, that means 16 per cent of jobless Canadians are left out.

Just because they’re not in Parliament doesn’t mean MPs and senators don’t talk to each other. Every day at 4:30 p.m. ET, including weekends, they can all dial into technical briefings convened by the PHAC. For up to an hour, departmental officials talk about announcements of the day and open the floor to questions. “We recognize that parliamentarians are playing an essential role by providing the Government of Canada with important feedback while also disseminating accurate information to their constituents,” says Health Minister Patty Hajdu spokesman Cole Davidson.

Adam Vaughan, parliamentary secretary for housing, told Maclean’s he calls into the meetings and regularly takes ideas raised back to policymakers. “It’s really good intel into what Canadians are thinking,” he said. “Right now, no good idea can go untested.” Vaughan says he’s in constant contact with opposition critics. “If they have a question or idea, I’ll listen to them all day long.”

A left-leaning “tax fairness” group is calling on the feds to attach a string to emergency aid for businesses: refuse to give help to companies that stash money in tax havens. France, Denmark and Poland have already taken similar steps.

Christmas in April: Canada Post asked Canadians watching their mailboxes for some patience. The crown corp said a surge in deliveries to housebound consumers has reached levels comparable to the holiday season. Total parcel deliveries this past Monday alone reached 1.8 million. A spokesperson told Maclean’s the single-day record, achieved last Dec. 9, was 2.2 million parcels, an effort that “took months of planning.” You’re probably seeing fewer flyers, though. Direct mail volume is “down significantly.”

500 days: That’s how long Michael Kovrig and Michael Spavor, two Canadians detained by China in retaliation for Canada’s arrest of Huawei executive Meng Wanzhou, have languished in detention centres. They’ve had no consular access since the early days of China’s COVID-19 outbreak. Maclean’s asked the question earlier this year that’s still gone unanswered: What will it take to free the two Michaels?