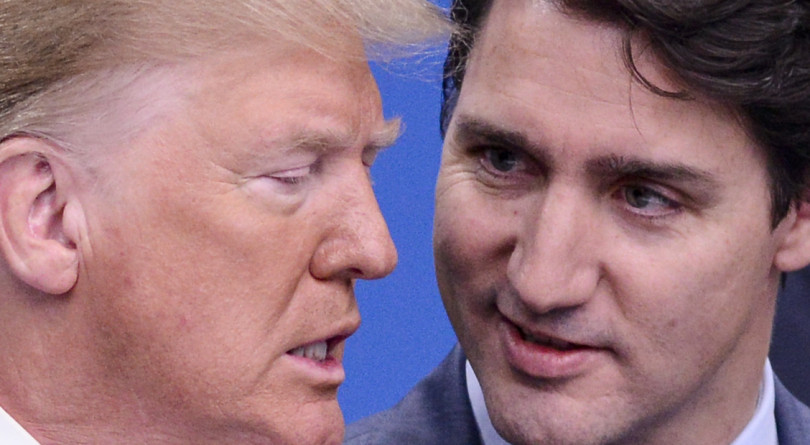 Gossipgate: Let’s face it, “two-faced” isn’t the worst thing Donald Trump has called Justin Trudeau. Nevertheless, after a CBC producer uncovered video of Trudeau gossiping about the U.S. president with other world leaders during a reception at Buckingham Palace, Trump lashed out at Trudeau before cancelling a press conference and leaving the NATO summit. “Well he’s two faced,” Trump said, while chalking Trudeau’s diplomatic gaff up to frustration for being called out by the president earlier over Canada’s insufficient defence spending. “Trudeau, he’s a nice guy, I find him to be a very nice guy. But the truth is that I called him out on the fact he’s not paying two per cent [of GDP in defence spending] and I guess he’s not very happy about it. He should be paying two per cent. It’s Canada, and they have money.” (Who’s going to tell him that Canada’s not actually even spending a significant chunk of the defence money he thinks we’re spending?)

Trudeau’s response to the episode: it’s all good. “We have a good and constructive relationship between me and the president,” he said later. As for his reference to the jaws of Trump’s team dropping to the floor at something the president said, Trudeau explained it was Trump’s surprise announcement that the next G7 summit would be held at Camp David. Trudeau also had one of his self-reflection moments, like he did the night the brownface photos first emerged when he admitted to being “more enthusiastic about costumes” than he should be. “I think every different leader has teams who every now and then have their jaws drop at unscheduled surprises, like that video itself for example,” he said.

Cue the political reactions back in Canada. “At a time when Canada needs strong relationships more than ever, Justin Trudeau’s poor judgment, lack of professionalism, and love of drama continues to weaken Canada’s position on the world stage. We saw this just yesterday at the NATO Summit,” said Andrew Scheer. Meanwhile Jagmeet Singh said “Mr. Trudeau often says some things in public and then says things very differently in private.” That spurred the usual suspects to attack Singh for “agreeing with Donald Trump 100%.” Actually, Singh was agreeing with Singh, who on brownface-night observed there’s “one Mr. Trudeau in public, he seems really nice, but behind closed doors there’s a different Mr. Trudeau.”

Whatever the case, Trudeau is now part of a U.S. election campaign ad from Joe Biden: “The world is laughing at President Trump. They see him for what he really is: dangerously incompetent and incapable of world leadership.”

Airplane II The sequel: With the prime minister’s official plane in the hangar, after someone drove it into a hangar, Trudeau was forced to borrow a replacement aircraft from the Royal Canadian Air Force. But after flying Trudeau to London crews discovered that plane had problems too, so now Trudeau has a replacement plane for the replacement plan.

You lot, back to work: It’s been 12 weeks since Parliament last sat before the election. MPs will return (or arrive for the first time) to a House very different from the last. The first order of business will be to vote on a Speaker. Five MPs are in the running — two Liberals, two Conservatives and a New Democrat. After that Trudeau’s minority Liberal government will be put to its first test (sort of). At 2:30 p.m. in the Senate chamber Gov. Gen. Julie Payette will read Trudeau’s throne speech, which will sketch out Trudeau’s priorities for the government. MPs will then debate it in the coming days before putting it to a confidence vote, which, if the Liberals lose, would see the opposition parties try to form a government, and failing that, another election. Before they vote on that motion, however, MPs may have to vote on another confidence motion to continue the supply of money to operate the government. It’s all rather complex, and if you’re lost, iPolitics can take you through each step.

What we’re likely to hear in today’s throne speech is a lot of talk about collaboration.

From residential school runaway to trailblazing MP: Last night in Ottawa at the Maclean’s annual gala honouring Parliamentarians, the 2019 Lifetime Achievement Award was handed out to Ethel Blondin-Andrew, Canada’s first Indigenous woman member of Parliament. John Geddes spoke with Blondin-Andrew about her journey to becoming an MP and the challenges she sees for her Dene people and the Canadian North:

She would hold her seat through five consecutive elections. After the Liberals returned to power in 1993, Prime Minister Jean Chrétien named her Secretary of State, Training and Youth. Despite her cabinet responsibilities and long tenure on key House committees, when Blondin-Andrew is asked what stands out for her from her years in Ottawa, she focuses on always making time for visitors from the North, or from Indigenous communities anywhere in Canada. “I didn’t want people to come to Ottawa and not be able to see a minister or someone from our party,” she says. “The way you treat people is the way that you will be remembered.” Read more ››

Here’s a collection of photos from the Welcome to the Hill gala.

Up for debate: Help us better understand what you’d like from the Maclean’s Politics Insider newsletter. This short survey will only take a few minutes to complete. We really appreciate the feedback.