Members of the House of Commons' Status of Women committee made their voices heard — one determined 'no' at a time. 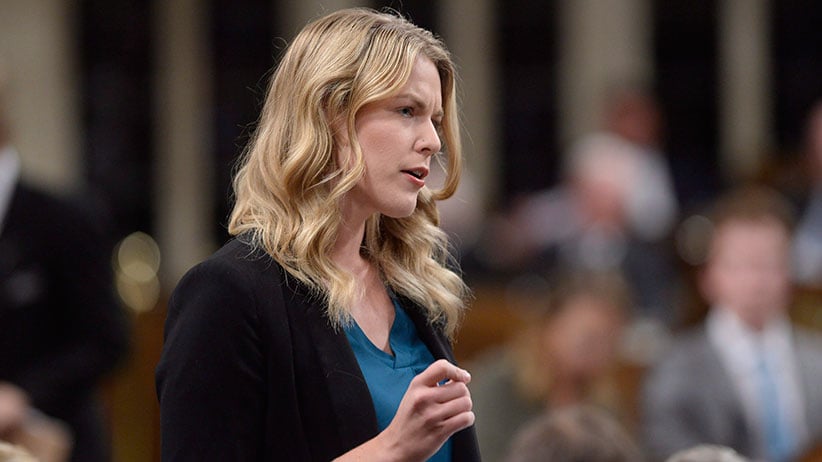 Conservative MP Rachael Harder rises during question period in the House of Commons on Parliament Hill in Ottawa on Wednesday, Sept.27, 2017. (Adrian Wyld/CP)

Mutiny was preordained, but Rachael Harder had to sit through the motion anyway. Passport photo-strong, she showed no emotion, revealing nothing but the halves of calves naked below the hem of her dress. The motion was to elect her as chair.

Harder is the member of Parliament for Lethbridge, Alta., and a member of the House of Commons Status of Women committee. Convention has it that the chair must be a Conservative, meaning her, Karen Vecchio or the moustachioed Martin Shields. Harder was nominated last Tuesday, but the committee walked out in protest because Harder has given money to health clinics that refuse to offer abortions. Surely, they argued, she cannot support women’s rights, so they took her down, “no” by merciless “no.”

“If the committee wishes, you can proceed by a secret ballot,” the clerk suggested. No, the committee wished to make the discomfort public. Harder sat directly across from most of the nay-sayers, close enough to pass the pepper had been sharing a meal.

Harder granted $11,681 to two pregnancy clinics in Lethbridge to hire summer employees in 2016, using money that MPs were given to create local jobs. The clinics have mandates suggesting that every child has the right to be born. The same year, Harder supported a private member’s bill that moved to make it a separate crime to kill a fetus when harming a pregnant woman. Harder has declined requests from journalists to detail her anti-abortion/pro-life profile.

Committee members worried a Chairwoman Harder would make witnesses uncomfortable, although logic doesn’t necessarily connect her abortion position to her ability to plan and time meetings. Marilyn Gladu, who served as chair for a year and a half, spoke on Parliament Hill this year during the National March for Life, and NDP MP Sheila Malcolmson said the committee was pleased with Gladu’s chairwomanship.

Entrepreneurship and fair hiring are highest on the committee’s agenda, so even if Harder strongly opposed abortion, her view may not have affected much of their business. In fact, if the committee did vote on abortion topics, it might have benefitted from a social conservative being chair because, except as tie-breakers or when the committee is considering a private bill, the chairperson does not vote.

But so-long, so-con; the committee voted Harder out and nominated a reluctant Karen Vecchio instead. “Although I appreciate the nomination,” Vecchio tried, “I would like to back down from that nomination.” The committee did not consent to withdraw the motion and elected their plan B, like it or not.

Meeting adjourned, Harder had to strategize to exit the building via escalator rather than elevator, avoiding the scrum where an NDP member was telling the world: “It’s impossible to have her as a spokesperson for our work.” But Harder hung back a moment in the room, rising from her cushioned, arm-rested seat that would never be the chair. She waited there until one woman, a staffer perhaps, came up to her and consoled her with a hug.