Waiting for Wilson-Raybould and Philpott 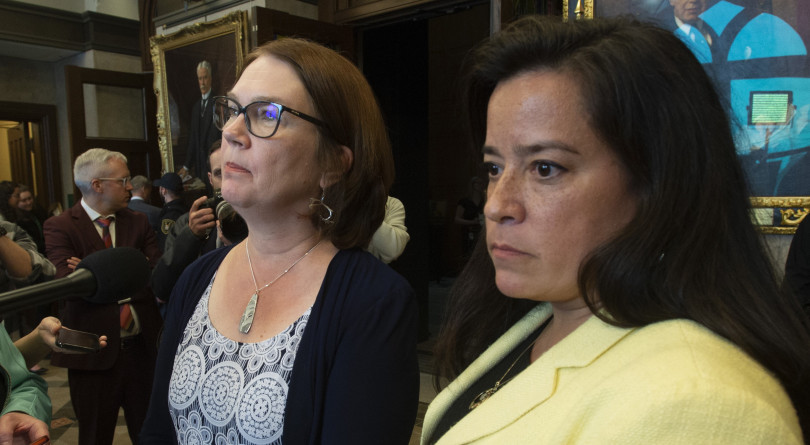 Aaaaaaand action: The latest episode of everyone’s favourite political soap opera (well, unless you’re a Liberal) lands today, as Jody Wilson-Raybould and Jane Philpott, stars of the SNC-Lavalin saga, reveal their next steps. On Friday the pair tweeted separately but simultaneously that they’d share their plans today. They’ll do so in consecutive press conferences from their respective ridings—Wilson-Raybould first at noon E.T. followed by Philpott a half hour later. Will they leave politics? Run as independents? Join another party? The NDP? The Greens? Together? Separately? So many questions.

Spoiler alert: One report over the weekend from online progressive news site Ricochet Media, citing anonymous interviews with sources close to the federal Green and NDP parties, said the expectation is they’ll both join Team May. What’s more, Ricochet reported that at least three former Quebec NDP MPs might change parties if the pair do go Green. (Ricochet Media)

Or not: But then on Sunday evening CBC News reported that no, the two women won’t be joining Elizabeth May’s Greens. Without saying where it got the information, the CBC also said it was unclear whether they would run as independents. The NDP was not mentioned at all in the story. (CBC News)

Is it really that crazy?: Regardless, here’s a question for Elizabeth May: Why, asks Matt Gurney in Maclean’s, is she willing to fritter away her party’s gains heading in this fall’s election by refusing to work with Conservative leader Andrew Scheer should his party fall just a few seats short of a minority?

Why shouldn’t May leave herself the option of working with Scheer? Not committing to doing so, but at least staying open to it. Lord only knows what she could wring out of the Conservatives if they truly were only a small number of seats shy of a government and the Greens had enough seats to put them over the top, leaving the Liberals and NDP on the outs.

It’s an especially interesting question because, assuming a 6-person Green caucus, we’d have ourselves a novel situation. (Maclean’s)

Frequent flyer: In this fall’s federal election Alberta Premier Jason Kenney has offered to campaign in Ontario swing-ridings on behalf of the Conservatives and against Prime Minister Justin Trudeau. Maclean’s Alberta scribe Jason Markusoff looks at what the Conservatives have to win and lose by unleashing Kenney on the campaign trail:

Kenney seems intent to make time-zone-hopping almost as regular an activity as premier as it was in his federal career, with his lecture and lobbying circuit in favour of Alberta oil and pipelines. On Friday, he was in Toronto to meet Mayor John Tory and speak to the C.D. Howe institute. The scoresheet, four weeks into Kenney’s premiership: two speeches in Hogtown, zero in his native Cowtown.

Will he be viewed now differently within communities he cultivated in years past? And perhaps more importantly, by voters who aren’t the target of his private fundraisers and events, and might be rankled by his fly-in work? (Maclean’s)

Take a stand: Senator Thanh Hai Ngo, a 72-year-old human rights activist appointed in 2012, has agitated relentlessly for the government to take a tougher stance with China. In an interview with Terry Glavin for Maclean’s, the senator spells out a set of actions Canada should take in response to China’s recent hostilities, including revoking the credentials of China’s belligerent ambassador Lu Shaye and ordering him out of the country:

Recent events have proved Ngo to have been consistently right about the threats Beijing poses to the international order, and about the sinister role Beijing’s agents of influence are playing in Canada. It’s a wonder he doesn’t just burst out with “I told you so,” lean back in his comfortable seat in the Upper Chamber and just sit there from now on, watching his adversaries squirm. But Ngo is not for sitting back.

Xi Jinping is engaged in a spiteful campaign against Canada at the moment and he’s winning, hands down, says Ngo. “I think so, yes.” In response to the arbitrary arrest of Spavor and Kovrig just days after Meng Wanzhou was detained in Vancouver on a U.S. warrant involving charges of bank fraud and violating U.S. sanctions in Iran, “Canada, so far, we didn’t do anything. . . we did nothing,” Ngo told me the other day. (Maclean’s)

All in or all out: With Theresa May‘s resignation as Britain’s prime minister, the hunt inevitably begins for a leader able to exert, through sheer force of personality, a resolution to the Brexit quagmire. But as Paul Wells writes, May’s successor will face the same confounding reality she did—the EU has almost no room to maneuver to ease Britain’s exit from Europe:

Even Remainers often talk as though the EU could deliver more lenient terms for Britain’s departure if the Brussels Eurocrats were in a better mood, or if they were sufficiently charmed or bullied by the right sort of U.K. prime minister.

It isn’t so. The European Union is a single market, based on the “four freedoms” of the 1957 Treaty of Rome: free movement of goods, services, capital and people. You can’t pick and choose among them. If labour can’t move freely among EU member states, the market has no meaning. If goods and capital can’t move under commonly-agreed terms, there’s no union. You’re in or you’re out.

That’s not the vengeance of Brussels, it is the only way the EU can work. Britain is free to decide these things don’t matter, but the stewards of the single market have no such freedom. They have to protect the EU’s internal market, which means they can’t let Britain be part-European, part-something else. (Maclean’s)

Didn’t catch the weekend political shows? Here’s some of what you missed:

Trump screws America’s allies, part XXVIII: In banning Chinese telecom giant Huawei from the U.S. market, President Donald Trump said the company’s technology posed a “national security” threat. But more recently he’s said he’s open to including Huawei in a U.S.-China trade deal. Trump’s shifting position on Huawei is putting America’s allies in a tough spot, former U.S. ambassador to Canada Bruce Heyman said on Global’s West Block: “Either it is a national security threat or it’s not, and you don’t negotiate that away in a trade agreement. So he’s made this too complicated and really put Canada in a tough spot on this.” (Global News)

Party on: Much to the chagrin of privacy advocates, Canadian political parties are not subject to privacy laws that would govern how they obtain and use Canadians’ personal information. Innovation Minister Navdeep Bains hinted on CBC’s The House this could change: [The point is] making sure that everyone has to follow the law — and that this applies to commercial activities as well where there’s non-commercial activities. We’ll address those issues in a thoughtful way in the coming weeks and months.” However Bains stopped short of providing a timeline for when such a change might take place. (CBC News)

Union fuse: Since the Trudeau government revealed that Unifor would sit on a panel that will decide who gets to dole out Ottawa’s $600-million media bailout package, critics have said Unifor’s ongoing campaign to oppose Conservative leader Andrew Scheer should disqualify it from participating. But Canadian Heritage Minister Pablo Rodriguez, who is overseeing the bailout process, said on CTV’s Question Period that’s just Scheer spin: “We wanted to make sure that the panel was constituted with people from all the spheres from the news world, so you have owners, you have unions representing journalists, and you have minority groups… it had to be balanced, represent the regions, represent the official languages and I think we reached a good balance there. Are we saying that we don’t want the workers to be represented?” (CTV News)