WE is leaving. The Liberals' troubles are not.

While the WE Charity is shutting its Canadian operations, expect committees to resume and tough questions to continue back in Ottawa 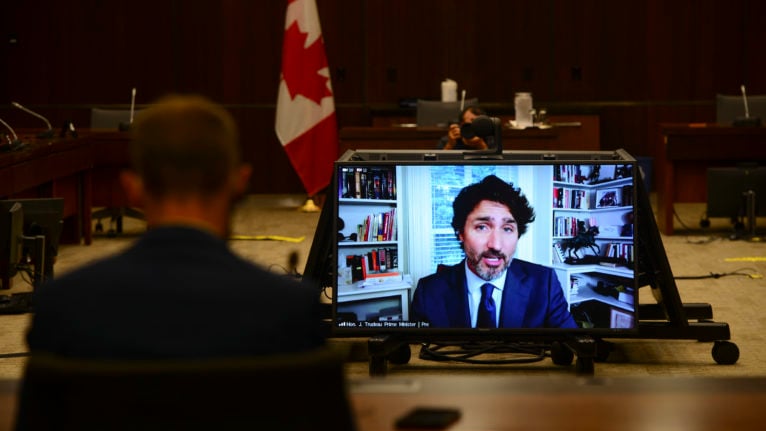 Trudeau appears as a witness via videoconference during a House of Commons finance committee on July 30, 2020 (CP/Sean Kilpatrick)

After months of political controversy around the defunct Canada Summer Student Grants program, WE Charity announced this week it would shutter its Canadian operations. Citing the pandemic’s disruptions to its programming and “political battles and misinformation that a charity is ill-equipped to fight,” WE Charity said it is ending operations in Canada and selling its assets to an endowment fund that will finance international development programs and digitize its educational resources.

Prime Minister Justin Trudeau and his cabinet continue to face questions about why the charity, which has close ties to his family, was chosen to single-handedly administer a $500-million grant program. Although that program never got underway, the accusation that Liberals were rewarding their friends led to intense scrutiny of the charity’s relationships with power. It led corporate sponsors and school boards to rethink their own ties.

Now WE Charity itself—or at least its Canadian branch—has collapsed under that pressure. But where do the Liberals stand? And what will happen to the various probes into the Liberals’ handling of the grants program?

Does this mean the political fallout over the Canada Summer Service Grant is finally over?

Nope. Sorry. If anything, it could add fuel to the fire. That the organization is shutting down some of its operations shows that there was a problem with due diligence in the first place, NDP MP Charlie Angus suggested immediately after WE’s announcement.

The charity had faced financial pressure around the pandemic, forcing it to lay off staff. This makes its agreement with the government look more like a bailout, to use Angus’s logic. WE insists it never stood to make a profit from the program, but Angus and other critics are unlikely to be dissuaded.

READ MORE: The rise and fall of WE

For opposition politicians and people inclined to look at the current federal government with a skeptical eye, the way Trudeau’s cabinet came to this contract decision is also emblematic of deep, intractable problems. The conflict-of-interest accusations remind them of other times that Trudeau has seemed to play fast and loose with his own ethics standards, and fears around the management of vast sums of money in this year’s pandemic response loom large.

Finally,  the rise and fall of the WE organization continues to hold the public’s interest. Don’t expect it to fade in Ottawa.

So what’s going to happen next?

The House of Commons finance and ethics committees had both been studying the issue before Trudeau prorogued Parliament in August, halting all committee work. Because Liberals only have a minority government, they are outnumbered on committees, so opposition MPs can vote together to reconstitute those studies when the House of Commons resumes its sittings at the end of September.

Pierre Poilievre, the strongest bulldog for the Conservatives during extensive finance committee hearings, has said he will make sure of it. In a tweet on Thursday morning, he said the charity’s closure changes nothing: “You can run but you can’t hide.” (In actual fact, we cannot imagine Poilievre standing down on this point for any reason.)

Wasn’t WE Charity asked to provide documents to the finance committee?

Yes. During their testimony to the committee, co-founders Craig and Marc Kielburger agreed to present MPs with additional documentation to back up their testimony—including details on the who, what and when of discussions about the Canada Student Service Grant, and information about then-finance minister Bill Morneau’s family trips to WE projects. But those documents did not come in before Parliament was prorogued.

Although the committee is likely to formally renew its request for those documents, a Conservative attempt to secure them sooner was shot down by WE’s legal counsel. Lawyers said in a late August statement to The Canadian Press that a letter from Tory MPs amounted to “politics, not proper process,” and that “when there is a new committee, our clients will be pleased to communicate with the clerk of the new committee regarding the production of documents.”

What questions that arose during committee testimony still haven’t been answered?

Thousands of pages of documents from the government to the committee, which dropped just before prorogation, went some way to explaining how the decision-making process worked. They appear to back up the government’s general assertion that public servants were the ones who recommended WE take on the grant program—but they also suggest that ministers may have been heavy-handed in suggesting the charity’s candidacy.

More documents from WE, or more testimony from people involved in the decision-making, could still clear up a few questions:

Wait, on that last point, isn’t Trudeau under a formal ethics investigation?

Yes, which brings us back to another reason the controversy isn’t dead yet (despite the yearnings of some). The fallout from the grant program will continue to reverberate in Parliament not just because of committee investigations but because ethics commissioner Mario Dion continues to investigate whether the Prime Minister and/or his former finance minister, Morneau, contravened the Conflict of Interest Act in their handling of the file.

Ethics violations do not lead to very many tangible consequences. Dion cannot suspend or fire anyone, although he can dole out fines of up to $500 in certain cases. This means Trudeau, even if he is found to have broken the rules for a third time in five years, will go on governing just the same. But such a finding would add to the opposition’s armoury—and, believe you me, that’s a weapon they’ll use again and again.