Well, that got everybody's attention

Politics insider for Sept. 19: The photo, the fallout and the folly of Trudeau's brownface disgrace 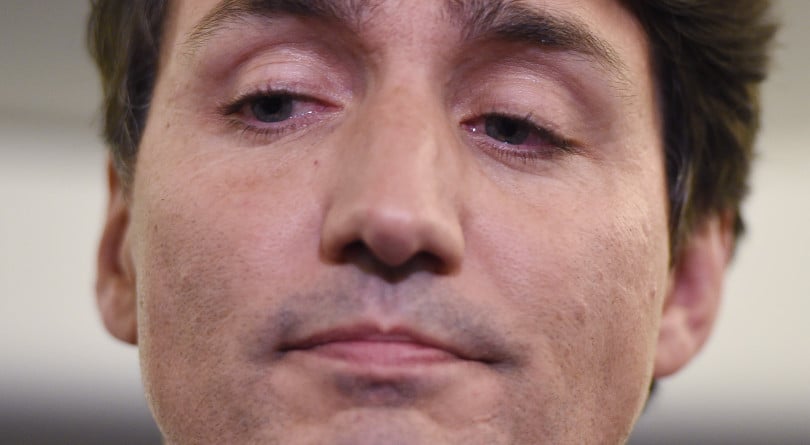 Liberal Leader Justin Trudeau reacts as he makes a statement in regards to photo coming to light of himself from 2001 wearing "brownface" during a scrum on his campaign plane in Halifax, N.S., on Wednesday, September 18, 2019. (Sean Kilpatrick/CP)

And this is why we have campaigns.

Team Trudeau might have started Wednesday thinking the most damaging thing to Justin Trudeau’s brand that day would be the lack of transparency around the costing of his platform promises, but it ended with the explosive revelation that Trudeau liked to dress up in brownface and blackface as recently as 2001, when he was a 29-year-old teacher, and a quarter century after even that old bigot Archie Bunker made it clear how wrong it was.

The story broke when Time magazine published a yearbook photo of Trudeau from his days as a teacher at West Point Grey Academy in Vancouver, B.C. in which he has brownface makeup on his face, arms and hands, which are clutched around a young woman who Trudeau described as “a friend.” During a hastily-arranged scrum on his campaign plane Trudeau also admitted to wearing blackface and singing Day-O at a highschool talent show.

Earlier this month, TIME obtained a copy of the yearbook, The View, with the photograph of Trudeau in brownface from Vancouver businessman Michael Adamson, who was part of the West Point Grey Academy community. Adamson was not at the party, which was attended by school faculty, administrators and parents of students. He said that he first saw the photograph in July and felt it should be made public. (Time)

A few hours later we also had a photograph of Trudeau in blackface in high school that appeared so simultaneously in the twitter accounts of CTV’s Evan Solomon and the Globe and Mail‘s Robert Fife that it was almost as if someone had it ready to go — ‘break glass in case of brown face emergency.’

The Liberal campaign is built around a sophisticated opposition research organization that says their opponents are bad people, writes Paul Wells. So where does it stand now?

The Trudeau tour, it turns out, has been a modern parallel to the ghost armies the Allies sometimes deployed a lifetime ago as a feint to confuse the enemy. The bulk of the Liberal campaign effort has been held back, well away from the leader tour, and has taken the form of a constant barrage of oppo research deployed against Conservative candidates. I called an acquaintance at Liberal HQ about this the other day, and was rewarded with a summary of this campaign’s successes to date. The Conservative candidate in York Centre wants to “end abortion,” Carolyn Bennett tweeted. The Brampton North candidate was homophobic on Facebook years ago. A candidate outside Ottawa is “bothered” by “the Quebec people”  and is right-wing hate-clown Faith Goldy‘s “best friend.” And on. And on. And on.

The depth and breadth of this oppo campaign is formidable, and I finally realized why it seemed familiar when I recalled that among the senior Liberal campaign staff are campaign director Jeremy Broadhurst and rapid-response lead Brian Clow, both veterans of the two-year campaign to save NAFTA. Colleague Nick Taylor-Vaisey wrote compellingly about that complex, layered effort while it was happening. There’s something about the NAFTA campaign in all this: the way dozens of staff members and elected Liberals have been conscripted to it; the tight message control; the sheer relentlessness. I actually suspect that in some corner of it, the Liberal campaign’s fondest hope is that this values barrage will serve as the template, not just for beating Andrew Scheer, but for beating Donald Trump and congressional Republicans in 2020. The whole plan, after all, germinated on a Halifax stage a year and a half ago when Gerry Butts and David Axelrod pondered their continental mission in front of an audience that included Justin Trudeau. (Maclean’s)

Meanwhile John Geddes looks at how the photos will impact the campaign, and the damage this does to Brand Trudeau:

Still, there seemed little chance that this fall’s Liberal campaign will be able to avoid serious backlash over the Trudeau photo. It undermines his carefully cultivated brand as a politician who champions diversity. His first campaign as Liberal leader in 2015 was credited with helping boost turnout significantly among visible-minority voters. For example, Statistics Canada said turnout among recent immigrants from Africa soared 22 percentage points in 2015 over the 2011 election, while voting rates among recent immigrants from West Central Asia and the Middle East jumped by 22 percentage points.

How much damage it causes the party on the path to the Oct. 21 vote, though, remains to be seen. It seems likely to make the Liberals think twice about continuing with their tactic of exposing evidence of past intolerance or insensitivity from Conservative candidates. Communications consultant Jason Lietaer, a veteran Conservative strategist, said an incident like this one would derail any federal Tory leader’s campaign. “If this was Andrew Scheer or Stephen Harper, there’s no way they would make it to the finish line, or, if they did, have a chance of winning,” Lietaer said in an interview. (Maclean’s)

More from the #cdnpoli-sphere pundits:

The satirical Beaverton actually even did a funny: “Liberals fail to vet Montreal candidate”

Everything else sort of feels secondary now, but there are still 32 days left until the election, so it all matters. Or it doesn’t. The voters will decide. Here’s what else is unfolding on the campaign trail:

Take your pick: Ahead of Wednesday the party had taken a lead over the other party in the polls. Which party? Both of them:

It’s raining money: More promises from Trudeau Wednesday, sans an independent accounting of their costs. The Liberals are promising a 10 per cent boost to Old Age Security at age 75 and pledged a 25 per cent increase in the Canada Pension Plan survivor’s benefit for widows. The party says the new promises will cost $1.63 billion in 2020-21 and climbing to $2.56 billion in 2023-24, but voters will have to take their word since Liberals declared only “big ticket” promises will get the PBO-treatment. (Canadian Press)

Scheer himself has made promises worth more than $60 billion over the next decade. Problem is, none of the leaders have provided any inkling of how they’ll pay for it all. (Toronto Star)

Your daily dose of (much-needed) Election 2019 humanity: While Jagmeet Singh was campaigning at the International Plowing Match in Verner, Ont. this week, he was approached by a mother who offered up her baby for Singh to hold for the cameras. It turns out she was Ontario Progressive Conservative MPP Christina Mitas, and the two politicians swapped family stories while Singh jiggled baby Cressida, eventually getting her to smile. “I think for Cressida it’s an honour to meet any leader of any party,” Mitas told Global News later. “And she’s been very fortunate so far to be exposed to a lot of political people of all different stripes. And everyone’s impressive and it’s great for her to meet people.” As for the 40-year-old Singh, who married Gurkiran Kaur last year, he admitted “My wife and I are, like, totally having baby fever.”  (Global News)