Anne Kingston: After faux-shaking Justin Trudeau's hand, May needed to establish that a Green vote was a credible alternative 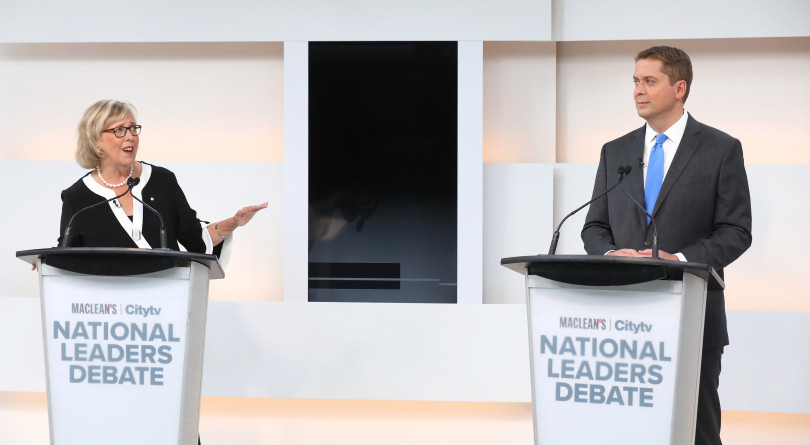 A foreshadowing of the tone Elizabeth May brought to Thursday night’s leaders debate in Toronto was evident a few hours before the sparring began. The Green Party of Canada leader called out Justin Trudeau on Twitter for being a no-show in the debate hosted by Maclean’s and Citytv, the first of this election cycle: “In 2015, Justin Trudeau said more debates were healthier for democracy. Why isn’t he showing up tonight? In 2015 he also said he wanted his daughter to see a woman on stage, so I should always be included. Yet he’s attending the TVA debate knowing full well I was not invited.” What viewers at home didn’t see was May’s playful arrival on set: she walked up to the podium left empty in Trudeau’s absence and pretend-shook the hand of a prime minister who was, in reality, campaigning in Edmonton.

What viewers did see was a leader who was energetic, engaged, willing to be specific as well as  impressively informed on a broad swath of topics (as well as the leader most willing to interrupt her fellow debaters). If prizes were  handed out for enlivened performance and candor,  May would win, hands down.

Meanwhile, Conservative leader Andrew Scheer exuded a preternatural calm apparently intended to telegraph prime-ministerial muster and to deflect incursions in the absence of his primary adversary. NDP leader Jagmeet Singh spent a lot of time sharing the concerns of all the average Canadians he’s been connecting with, a seemingly folksy bid to regain the NDP’s “for the people” mojo it has lost according to recent polls.

WATCH: A full replay of the Maclean’s/Citytv National Leaders Debate

What May had to do on Thursday night was less than she did: show up, show off a platform that extends beyond environmental issues, and prove why the Greens deserve a federal shot. For months, the tides have been turning in the Greens’ favour. Their fortunes have been abetted by a real-time climate crisis—fires, floods, hurricanes. Polls report Canadians, particularly younger voters, view the climate as a top election issue. The federal Greens have been buoyed as well by provincial wins: in B.C., Ontario, New Brunswick and P.E.I., where the Greens formed the official opposition this year. In May, Paul Manley was elected the second Green MP in a Nanaimo, B.C. by-election. Hope runs high that B.C. will provide additional Green seats this election, with NDP ridings targeted.

But in the days leading to the debate, the Greens lost traction. First, May, who defines herself as pro-choice, volunteered in an interview that she wouldn’t block Green MPs from reopening the abortion debate — followed by a party statement that such a scenario would never arise. Then, in 3-2-1, two Green candidates were found to have made anti-abortion statements in the past. In her inaugural election speech in Victoria on Wednesday, May reaffirmed both her and the Green Party of Canada’s support of a women’s right to legal abortion. But doubts had been seeded, particularly among voters who see the Greens as a progressive alternative to the NDP.

Within hours of that gaffe, Green candidate Pierre Nantel, a Montreal-area MP who quit the NDP last month, boasted of being a sovereigntist in a radio interview; he advocated for Quebec to separate. Confusing the plot further, Green Party spokesperson Rosie Emery told media that national unity is “not one of the party’s core values.” Elizabeth May then insisted Nantel isn’t a sovereigntist. He countered that indeed he is.

RELATED: Election 2019: Let the games begin—and may the odds be ever in your favour

So when May entered that studio, after faux-shaking Trudeau’s hand she needed to reestablish that a Green vote was a credible alternative to both the Liberals and the NDP. And she ably outlined the party’s comprehensive if ambitious platform, one that includes a guaranteed livable wage, national pharmacare, free tuition, carbon-neutral housing, and the elimination of poverty. Her second task was to convey a sense of dire urgency that underlines the Green platform — and her own political career. And that’s more difficult to accomplish within the strictures of a formal debate.

May proved herself  in command of facts and costing details, in one instance taking on Singh’s promise to provide dental care to Canadians. The Greens had costed it out, May said, and found the expense was $30-billion —so they redrafted their platform to provide it only to low-income Canadians.  She also deftly pointed out the provincial NDP’s support of the LNG pipeline in B.C.

The former lawyer and environmental activist defies political expectations because she herself rejects the traditional partisan political label. Of all of the leaders on that stage she was the most specific and willing to take a stance on contentious issues, referring to Bill 21 as “clearly an infringement on individual human rights.”

The Green leader gave both Singh and Scheer conciliatory props for some aspects of their environmental plans before ripping them down: “You sound almost like a Green but you won’t adopt a target,” she told Singh. Likewise, Scheer received a few head pats before May eviscerated both his and Harper’s (and Trudeau’s) failure to meet emission targets.

READ MORE: The Elizabeth May show and the first leaders debate

May spent a lot of time upbraiding Scheer, even though that tactic is unlikely to deliver new votes. In one instance, she hammered how he spoke about Indigenous communities. “We are talking about nations not communities or special interest groups,” she said. (May also pledged to completely fulfill the requirements and recommendations of the Truth and Reconciliation Commission and the Murdered and Missing Indigenous Women’s Inquiry.) She also took aim at the Conservative leader with a reference few under 50 would get: “[Trump]  might as well be the ventriloquist and he is Charlie McCarthy.” May’s vision for Canada: “We need to be the anti-Trump in the world.”

On the foreign policy round, May let it rip in a way that won’t win her a diplomatic posting, but refreshingly left no doubt where she stood. “Anyone who gives an answer saying they know what to do with China isn’t telling the truth,” May said, shooting down Singh, and attacking China’s human’s rights record. Canada’s number one concern, ahead of canola or pork sales, must be the safety of Canadians detained there, May said. Diplomatic relations have to deepen.

She called Brexit “disastrous” and waded into Israel’s “illegal appropriation of Palestinian land” while addressing Scheer, terming it a “terrifying situation” and a “humanitarian crisis.” “I stand foursquare with Israel,” May said, before calling Israeli Prime Minister Benjamin Netanyahu’s policies “dangerous” for the region.

The paradox of Elizabeth May is that the same behaviour that raises concern and eyebrows also garners steadfast support. “The bottom lines for Greens isn’t about power for us,” she said explaining why she couldn’t in confidence support any minority government not committed to holding global warming under 1.5 degrees C. “It’s time for some courage,” she said. “It’s time for bravery.” Elizabeth May is talking about the spectre of human extinction. For Canadians watching at home, a non-confidence vote raises the spectre of a inconvenient second election. And that, in nutshell, captures the tensions on display Thursday night.