Facebook can claim its very busy man in Ottawa is not a lobbyist. Here's how.

Facebook has an active and growing interest in Canadian policy. But unlike other big tech firms, none of its employees are registered as lobbyists. 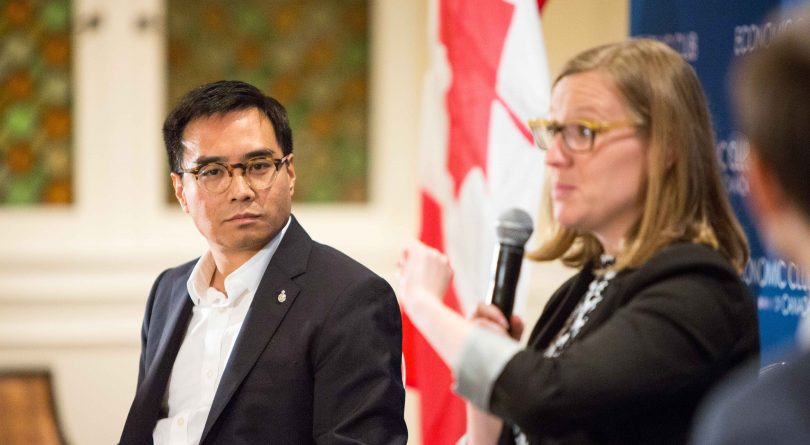 In October 2017, Facebook announced its Canadian Election Integrity Initiative, a set of public media literacy and politician cyber security programs, in an event streamed live on the site.

Canada’s Minister of Democratic Institutions, Karina Gould, took the stage at the Economic Club of Canada-hosted event in Ottawa. In her introductory remarks, she suggested social media platforms needed to consider “how they can create spaces for informed public dialog” and declared herself “absolutely delighted” with Facebook’s new scheme.

Then she sat down for a panel focused on online threats to democracy with two experts and Facebook’s Canadian head of public policy, Kevin Chan.

In January 2016, science minister Kirsty Duncan and Liberal MP Rob Oliphant were at the Ontario Science Centre for an event co-hosted with Facebook-owned Instagram, along with Chan. And in 2015 two members of the then-Conservative cabinet attended a Facebook small business-themed event in British Columbia co-hosted with the Vancouver Board of Trade.

Facebook says government relations are not a big concern, but it has demonstrated interest in hugely consequential issues of democracy, economy and privacy now dominating the headlines. Meanwhile, Chan—a former bureaucrat and political staffer—has become a familiar face in Ottawa.

But unlike other giant tech companies, no employee of Facebook is registered in the federal Registry of Lobbyists. (Google’s registration lists eight).

The Lobbying Act requires a company to register with the commissioner when its employees are communicating with government officials on the making or changing of policy, regulation or legislation. But there’s a floor. A company need only sign up when those contacts amount to a “significant part”—defined as 20 per cent—of one employee’s time or duties or when multiple employees collectively work the equivalent of a fifth of a single person’s job on lobbying. The calculation includes time spent talking to officials, plus prep and travel time, and any follow-ups. Companies track this themselves.

When asked about its lobbying, Facebook would not provide details of its activities since Chan, who is based in Ottawa, joined the company in 2014. But it insisted it does not meet the criteria that would require it to register.

“We do not exceed the [20 per cent] threshold. We don’t even come close to the threshold,” Chan says in an interview.

READ MORE: Here’s everything Facebook already knows about you

There is no indication that Facebook has violated any rules. Participation in consultations initiated by the government typically does not count as lobbying, and both Facebook and ministers’ officers confirmed that there has typically been no discussion of government policy at the company’s events.

But the self-tracked nature of the lobbying reporting process, combined with a lack of audits by the lobbying commissioner, can make it hard for the public to determine what exactly corporations are saying to government.

Facebook’s profile in Ottawa has raised some concerns: Duff Conacher, co-founder of Democracy Watch and an adjunct professor of law and political science at the University of Ottawa, is calling on the lobbying commissioner to investigate Facebook’s activities—not because there is evidence of a violation of the act or code, but to ensure compliance.

Chan says his role, and that of Facebook’s public policy team globally, is to “engage with the broad policy community,” which he defined as government officials but also non-governmental organizations, academics, media and activists to “help them better understand Facebook and our products and services, but also issues that are sort of broadly speaking about the Internet.” The team also helps people “be better” at their use of Facebook as a platform.

But Facebook is “active on the Canadian policy front,” says Fenwick McKelvey, an assistant professor at Concordia University who studies Internet policy and digital political communication, pointing to its intervention before a Canadian Radio-television and Telecommunications Commission hearing.

McKelvey cites reviews of the broadcasting system and election integrity, and the taxation of the corporate income of digital platforms and the advertising they host as examples likely to affect Facebook in which the federal government is reportedly considering or has been called upon to make policy.

McKelvey’s enumeration matches Chan’s own list of issues that Facebook cares about on one point: election integrity. But Chan also names “economic growth online, safety online, privacy [and] the future of news.” All these issues operate at the “ecosystem,” not necessarily the government level, he says. Taxation is “not one of our priorities,” he says.

Many of the other U.S. tech giants operating in Canada do have employees registered as lobbyists. Google Canada’s registration lists six of eight who exceed the threshold, including Chan’s counterpart, public policy and government relations head Colin McKay.

Conacher notes the contrast between Google and Facebook’s lack of registration, especially given that “the federal government has been dealing with as many issues that affect Facebook as affect Google.”

Google filed 12 reports with the lobbying commissioner in just the last three months of 2017.

In February 2017, Chan and a representative from Google Canada testified before a House of Commons committee studying the state of the media in Canada. Subsequently, Google Canada reported several contacts with senior officials from the heritage and finance departments on “taxation” and “broadcasting” respectively, leading up to Minister of Canadian Heritage Mélanie Joly’s September launch of the government’s new cultural policy, which contained no digital advertising tax, as had been recommended to her.

Spokespeople for Joly and Finance Minister Bill Morneau, said neither the ministers nor anyone on their staffs had talked to Facebook about taxation of digital advertising during that same period.

But Joly did visit the company’s main headquarters on a tour of Silicon Valley in April 2017, where she participated with Chan in a publicly-broadcast discussion on online information credibility and artist promotion. Morneau spokesperson Dan Lauzon noted that the minister’s office has previously met with Chan “on digital strategy and best practices,” not policy, meaning it would not have been lobbying.

Facebook and Google are increasingly integral to most people’s lives, says McKelvey. “It would be absurd to think that they aren’t aware of or concerned about the ways that their … greater visibility would be attracting more government attention, and trying to be proactive in shaping how that will play out,” he said.

That scrutiny is only likely to increase after  it was reported that users’ Facebook data was accessed by micro-targeting firm Cambridge Analytica to alledgedly influence the U.S. presidential race; Canada’s Privacy Commissioner is now investigating the impact on Canadians.

In the U.S., analysis by the Centre for Responsive Politics showed that Facebook spent $11.5 million on lobbying the government last year. Facebook said comparing its government relations efforts in Canada and the U.S. is inappropriate, and also that its Washington work is small compared to its peers. According to the Centre’s calculations, the company ranked third in its industry behind Google-parent Alphabet ($18.1 million) and Amazon ($13 million).

Given his two-person team tries to “engage with stakeholders” including but not limited to government, which includes talking about what Facebook is doing and receiving feedback, Chan said, “I would think you would conclude that there actually is limited bandwidth” for lobbying activities.

Asked about how Facebook makes its interests known to government, Chan said “we demonstrate our views by doing things,” and that the company is proactive rather than waiting for regulation to be discussed. He cited the Election Integrity Initiative, which he says arose from a report by the Canadian Security Establishment in June that year on “cyber threats” to the democratic process, produced at Gould’s request.

Facebook is not entirely absent from the lobbyist registry. There were 16 external government relations professionals or “consultants,” as they’re called under the Act, enrolled in its name between 2010 and 2017. They collectively filed just 11 monthly communication reports over that period and none between July 2014 and March 2017. Some consultants have filed no reports.

Chan, who joined Facebook in August 2014 from a role at McGill University, said that the retention of the consultants predates his arrival and that they “do not talk to government on our behalf.” Their disclosures accurately reflect their government relations activity on behalf of Facebook, he said.

If a lobbyist is not actually communicating with the departments they name in the registry on the subject matters they identified, that effectively renders the registration inaccurate, Conacher says. “You can’t just register to cover yourself and throw a bunch of words in there,” he says.

Conacher says the threshold for an investigation by the lobbying commissioner is that one is needed to ensure compliance with the rules. He’s calling for one of Facebook’s activities, citing the lack of registration and use of consultants, and noting that he’s doing so not because there has been a clear violation, but because “the evidence raises serious questions.”

Conacher also expresses concern about Chan’s previous association with the Liberals. Chan was executive assistant to the Clerk of the Privy Council, the highest-ranking bureaucrat in the federal government until 2009, when left the civil service to become a senior policy advisor to Michael Ignatieff, then leader of the opposition and the party. Chan says he has had no formal involvement with the Liberal Party since leaving Ignatieff’s office in 2011.

Chan is also on the advisory board of Canada 2020, a progressive think-tank whose “partners” include Facebook, Amazon, Shell, and Google. (McKay is also an advisor, and Rogers Communications, which owns Maclean’s, is also a partner). The organization is officially non-partisan, but a number of Liberal ministers have headlined events hosted by the organization, and its founders are connected to the party.

Facebook confirmed that Chan attended the think tank’s 2015 conference, but said he did not meet with ministers who were also present. The company notes it has sponsored and been similarly represented at the Conservative-associated Manning Networking Conference and the NDP-frequented Progress Summit put on by the Broadbent Institute.

The Cambridge Analytica scandal has put Facebook firmly in the sights of government and the public. Expect to see more of Kevin Chan, lobbyist or not.

Clarification: This story was updated to reflect the fact that the January 2016 event attended by science minister Kirsty Duncan and the 2015 event attended by two Conservative cabinet ministers were co-hosted with the Ontario Science Centre and the Vancouver Board of Trade respectively.