What would a guaranteed basic income cost Canada? Just $43 billion.

The Parliamentary Budget Officer modelled a national program at the request of federal Tory Pierre Poilievre, who had some harsh words for Ontario pilot on which the report was based 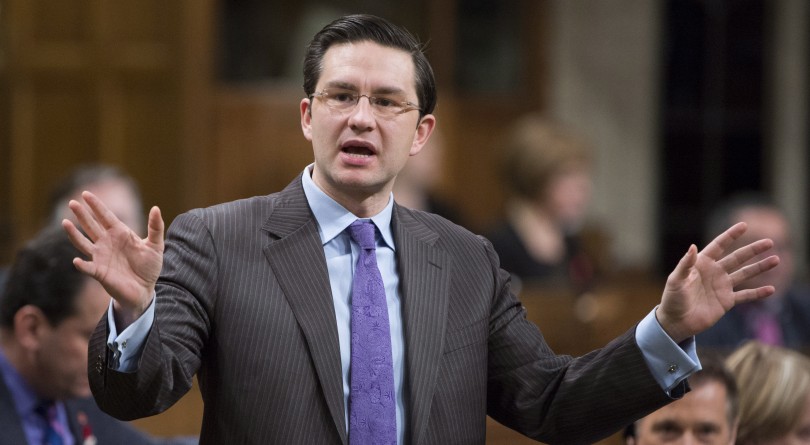 Conservative MP and finance critic Pierre Poilievre rises in the House of Commons in Ottawa on Friday, Dec. 1, 2017. (THE CANADIAN PRESS/Adrian Wyld)

This story has been updated with comment from Conservative finance critic Pierre Poilievre and details of the Ontario pilot from the ministry of community and social services.

A national basic income program modelled on an ongoing Ontario pilot would cost $76 billion and benefit 7.7 million in the base year, according to a report released today by Office of the Parliamentary Budget Officer (PBO). Minus existing federal benefits, it nets out at $43 billion.

The Kathleen Wynne Liberal government’s experiment “simply proposes to increase welfare payments, give them to more people and call it something different,” says Conservative finance critic Pierre Poilievre, whose request the PBO was acting on.

The Ontario model does not meet the lay understanding of a basic income—a universal, flat payment. It is instead a negative income tax, a top-up for people who earn under a certain amount. The scheme is pegged to 75 per cent of the low-income threshold, which the PBO for its purposes calculated at $16,989 for an individual and $24,027 for a couple using Statistics Canada’s federal version of the measure. Those with no employment earnings get the full sum, with every dollar of earnings thereafter reducing the payment by 50 cents.

Employment Insurance and Canada Pension Plan cash is also deducted from the payment. Persons with disabilities must disenroll from provincial support programs, but receive an extra $500 monthly. Seniors cannot participate in the pilot, since the benefits available to them total more than the basic income amount.

The PBO’s analysis uses the same rules. In November 2017, it released a report detailing existing federal support for people of low income, with the total allocated for those who would be eligible for a national program under those rules coming to $32.9 billion for the previous fiscal year. Subtract that from the total cost, and you get that $43 billion figure.

But Poilievre questions some of the assumptions built into that “net” number. “It’s not a given that all of these programs could be removed if you brought in a guaranteed income,” he says.

Advocates argue that the security of a basic income would help reduce poverty, and improve access to education and healthcare. The savings those improved outcomes provide would go some way to defraying the cost of such a program. Basic income is also seen as a solution to the job losses created by increasing automation.

Poilievre tapped the PBO in response to what he calls “a lot of conversation” about introducing a guaranteed basic income, sans any discussion of its costs. “There are trendy TED talkers who are going on YouTube to extol the virtues of this idea, but they never explain how they would pay for it,” he says.

Since the analysis focuses on a specific proposal for implementation, the Member of Parliament for Carleton says it cannot be used to judge the “overall merits” of basic income, although it does provide “a general idea of the price tag” of such a policy. But he does cite it as a valuable estimate for what implementing the Liberals’ pilot across Ontario would cost. He pegs that at $30 billion, using the province’s share of the national population in relation to the PBO’s numbers.

Poilievre says he requested the use of the Ontario pilot as a reference after the PBO said it needed a framework for a basic income policy to examine. Though his tweets today in response to the report have been focused on what he calls “Wynne’s plan,” Poilievre says he did not engage the PBO on this subject specifically to go after the Ontario Liberal government. “I wanted to know the overall cost of an idea of this kind.”

The office of the PHO said earlier in the day that Poilievre had asked for an estimate of a guaranteed minimum income policy, but did not provide parameters.

The PBO’s costing does not account for changes in behaviour that a basic income might bring about. For example, a 1993 paper that looked at Canadian and U.S. experiments found a reduction in hours worked by recipients, with men cutting back less than women. That study included a test in Dauphin, Man., that ran for four years from 1974. Many of those who stopped working in that instance were teenage boys.

But some of the costs could also be offset by the increased consumption tax revenues generated by a rise in spending from consumers with more money in their pockets. And provinces might choose to end some benefits and credits, which would reduce the social transfer payments for which the federal government are on the hook.

“The supposed virtue of the idea is that it collapses a bunch of complicated and bureaucratic systems into one single payment that gives more autonomy and independence to people in need,” says Poilievre, noting that was a major selling feature when figures like Milton Freidman discussed basic income a few decades ago. But the Wynne pilot does not identify where it would simplify or save in this way, Poilievre says.

The PBO’s study does not take into account the administrative costs of creating a new benefit or savings from removing others—it only sums up the total amount that would be issued to recipients.

The provincial ministry of community and social services would not say exactly how many people have signed up for the program so far, but Lyndsay Miller, spokesperson for minister Michael Couteau, said the government is “well on our way” to its target of approximately 4,000 participants. An Oct. 4, 2017 release said that 400 people from the test areas of Hamilton, Brantford and Brant County and Thunder Bay and the surrounding areas were set to get the payment that month, with enrolment in the third location, Lindsay, then about to begin.

A team of independent experts will evaluate the pilot on its effect on labour market participation, but also factors like mental health, housing stability, participation in education and training, among others. Miller says the design of the study is “still being finalized,” including whether the results will be released on an ongoing basis during the course of the experiment, or at the end.

Federal minister for families, housing and social development Jean-Yves Duclos has previously described the Canada Child Care Benefit as a form of a basic income, though he said the government is looking with interest at the provincial experiments with a parenting-agnostic minimum benefit.

A motion at the Liberal’s 2016 convention calling on the party to look into a “poverty reduction strategy aimed at providing a minimum guaranteed income” passed; further motions in support of some form of a basic income did not make it into the 30 that will be voted on at this year’s gathering, occurring this weekend in Halifax.