What's a Tory leadership race without the Mounties?

Politics Insider for June 23: The RCMP investigates allegations made by Erin O'Toole's camp, Iran makes promises—again—on Flight 752 and Ottawa could get another transit tunnel 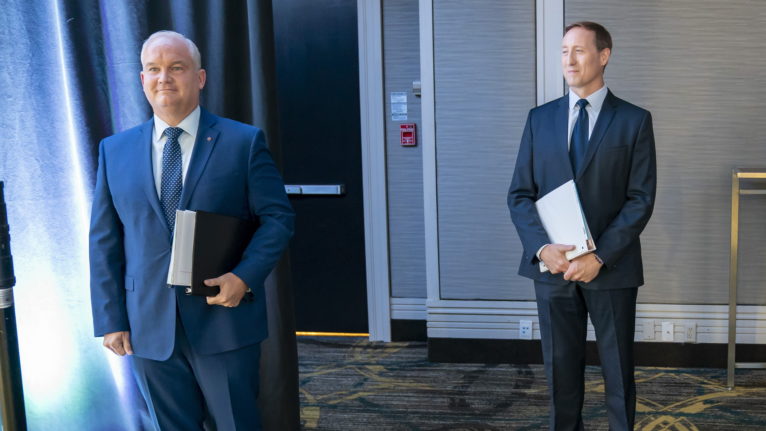 That escalated quickly: The Mounties are investigating allegations that someone in Peter MacKay‘s leadership camp inappropriately accessed recordings of the Erin O’Toole camp’s Zoom meetings on campaign strategy. MacKay’s team denied the claims, which came from O’Toole’s team. Jamie Lall, the MacKay man named by the other guys, reacted on Twitter with three laughter-infused emojis. The accusers say they have a confession from an unnamed MP’s staffer.

What loss? Sure, Canada lost a five-year fight for a prominent seat at the UN security council. But that defeat didn’t stop Mike Pompeo, the U.S. secretary of state, from posting a short—but stern—show of solidarity with Canada’s effort to free the two Michaels, Kovrig and Spavor. The U.S. is “extremely concerned” with China’s decision to lay charges agains both men, and “rejects the use of these unjustified detentions to coerce Canada.” Kovrig’s wife, Vina Nadjibulla, spoke out for the first time in an interview with CBC’s The National.

Foreign Minister François-Philippe Champagne may have scored a small win on justice for the victims of Flight 752 on the other side of a phone call with his Iranian counterpart. Mohammad Javad Zarif reportedly “committed to Iran sending the flight recorders to France for analysis without further delay.” Iran will, according to a readout, “detail its progress” at an International Civil Aviation Organization meeting this week. Iranians have made the same promises for months. Something new: Zarif agreed to “enter into negotiations for reparations” for the victims’ families.

Dominique Anglade’s under-the-radar accession: If you live outside in Quebec and aren’t familiar with Anglade, Tom Mulcair is here to introduce her to you. The former NDP leader writes in Maclean’s that Anglade, a former CAQ party president who flipped to the Liberals, “has all the makings of a premier for a new generation.” He traces her story from her parents’ fight against a repressive Haitian regime.

Anglade is the daughter of Haitian immigrants who found refuge in Canada after battling the François Duvalier regime. She wasn’t just taught social justice, she has lived and breathed it her entire life. Her parents were both academics who had gone to France for much of their studies and held doctorates in their respective fields. Her father, Georges, was a geographer who helped found the very progressive Université du Quebec à Montréal. Her mother, Mireille Neptune, was a respected economist who also taught high school. They were social justice warriors in their home country.

Canadian consumer confidence fell off a cliff in March, but Bloomberg and Canadian pollster Nik Nanos are recording a huge bounce as economies slowly reopen. Nanos called the uptick a “U-shaped trend line,” which isn’t quite as dramatic as a V-shaped recovery. Don’t get too excited. Tiff Macklem, the brand new Bank of Canada governor, warned the nation was in for a “prolonged and bumpy” ride back to economic normalcy.

What Americans don’t know… should worry us: Seventeen per cent of Americans support an invasion of Canada. Two in five say they’d like to buy Alberta. Those are a couple of takeaways from a provocative Abacus poll of Americans. Bruce Anderson, the chair of the polling firm, writes in Maclean’s that Canada shouldn’t mistake those opinions for hostility—but rather the consequence of a country thinking less about consequences.

The mood in America has worsened. America has become richer but angrier. More limited in its understanding of the world and more divided internally. Half see a serious chance of another civil war. What could go wrong for Canada? Half of Republican voters would go along with abandoning NORAD, roughly a third would support building a wall and putting troops along the Canadian border. Happily, most Americans are against invading Canada to get at our resources. But stop and think about the fact that only 56 per cent of Americans strongly oppose the idea.

What’s better than one transit tunnel underneath downtown Ottawa? How about a second transit tunnel? The STO that shepherds so many Outaouais-dwelling public servants to work—and many will be commuters again soon—wants to tram its way across the river. Two options are on the table: an above-ground tram along Wellington Street and a tunnel beneath Sparks Street. Make your voice heard now. As the Rideau Transit Group loses its CEO, wouldn’t it just sting that much more if Ottawa couldn’t even build the best transit tunnel in Ottawa? This joke’s gotta hurt down at city hall.