When in doubt, make electric vehicles cheaper for Canadians

Politics Insider for March 4: Trudeau heads to an electric bus manufacturer in Quebec, the defence industry gathers at the Chateau Laurier and guess which premier is most popular? 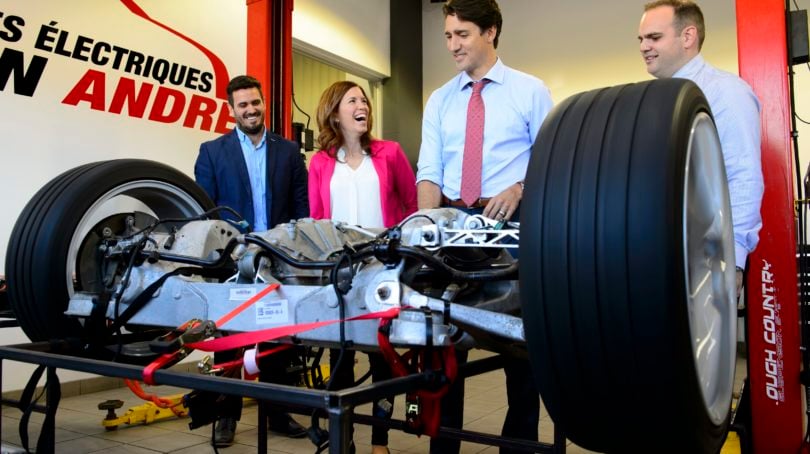 Justin Trudeau is given a demonstration of an electric car motor as he makes a campaign stop at an electric vehicle car dealership in Trois-Rivieres, Que., on Friday, Sept. 13, 2019. (Sean Kilpatrick/CP)

Perhaps eager for a respite from the various emergencies of the moment, Prime Minister Justin Trudeau was in Halifax yesterday. He announced $492 million in funding for youth employment. Later, the PM made a surprise appearance at a citizenship ceremony in Wolfville, N.S. His photographer, Adam Scotti, caught the moment on camera. This morning, Trudeau is in Saint-Jérôme, Que.—a Bloc Québécois-held riding—to visit Lion Electric Co., a local manufacturer of zero-emission buses and trucks. Could these very vehicles be in line for an expanded federal incentive? (It can’t hurt that a focus group in Trois-Rivieres, Que., last year praised just this sort of initiative.)

Of course, whatever is announced today, the tough public-policy issues with no obvious happy endings that have recently challenged Trudeau will continue to give the PM headaches. In his column for the latest print edition, Paul Wells writes that the man in charge should have seen these various crises coming—after all, he took them seriously long before he took power.

This has been coming all along. The crisis, or interlocked series of crises, that swallowed up Ottawa’s February was made of issues Justin Trudeau has talked about for most of a decade. He has been trying to build a grand bargain on energy, the environment and Indigenous reconciliation for as long as he has been wanting to be Canada’s prime minister. It was always going to be hard, but there is something satisfying in watching a man face a test he wanted and saw coming.

Last night, CTV News reported that Deputy PM Chrystia Freeland would head up a cabinet committee struck specifically to deal with the government’s response to the coronavirus outbreak.

Yukon’t miss this hotel: Environment Minister Jonathan Wilkinson is the latest political celebrity to visit the Coast High Country Inn in Whitehorse. After making a climate-change funding announcement down the street at the Whitehorse Correctional Centre, Wilkinson will head to the hotel to address the Assembly of First Nations National Climate Gathering. Last summer, Andrew Scheer was at the same building—known for its epically tall and gaudy Mountie statue—for a speech to the local chamber of commerce. In 2016, Prince William and Kate Middleton famously spent the night.

Export Development Canada, the crown corporation that lends money to trade-oriented companies, is the latest target of protests in solidarity with the Wet’suwet’en. Students plan to stand in front of EDC’s downtown Ottawa headquarters this afternoon to demand the company not offer public financing—which is currently under consideration—to the Coastal GasLink pipeline.

James Moore, a former Harper-era cabmin and five-term MP, keeps appearing in prominent post-parliamentary places. Yesterday, the Business Council of Canada published a paper on Canada’s place in the digital economy. Moore, whose last cabinet gig was at Industry, co-chaired the advisory panel that produced the report. He’s an advisory guru of late, having sat on the Trudeau government’s NAFTA advisory panel and the Auditor General of Canada’s panel of senior advisors. Moore is also a senior business advisor on government relations for Dentons and a senior advisor at Edelman. He also sits on the boards of the Canada China Business Council and the Canadian Cancer Society.

The Conference of Defence Associations Institute is hosting its annual gathering on defence and security for the next two days at the Chateau Laurier. Canada’s military brass, including Chief of the Defence Staff Jonathan Vance, will make appearances today. This morning, a panel on major power dynamics in the Middle East will feature Chinese Ambassador Cong Peiwu on the Belt & Road Initiative. An unnamed Russian participant was on the agenda to talk about the country’s Iran and Syria strategy, but Russia pulled out of the event. Col. Amos Nachmani, the Israeli Defence Attaché to Canada, will take that spot.

No Moe popular than Legault: Saskatchewan and Quebec’s premiers tied for top spot in Angus Reid‘s most recent poll on provincial popularity. Scott Moe and Francois Legault each won 58 per cent approval, ahead of New Brunswick’s Blaine Higgs who scored 48 per cent. Jason Kenney (47 per cent) and John Horgan (46 per cent) were next on the list, dropping seven and 10 points, respectively, from their December numbers. Dwight Ball, the outgoing Newfoundland premier, was dead-last at 26 per cent.

Did you know there are actual rules in place that govern the construction of public servants’ email signatures? It’s true. Just check out Appendix E on this document deep within Treasury Board’s standards and guidelines, which describes the 11-line structure required of those on the federal payroll. And by the way, those sign-offs absolutely must be sans-serif.