When it comes to NAFTA, deadlines are meaningless

Since the renegotiation began, red circles on the calendar have repeatedly come and gone. The reality: 'It will take as long as it takes.' 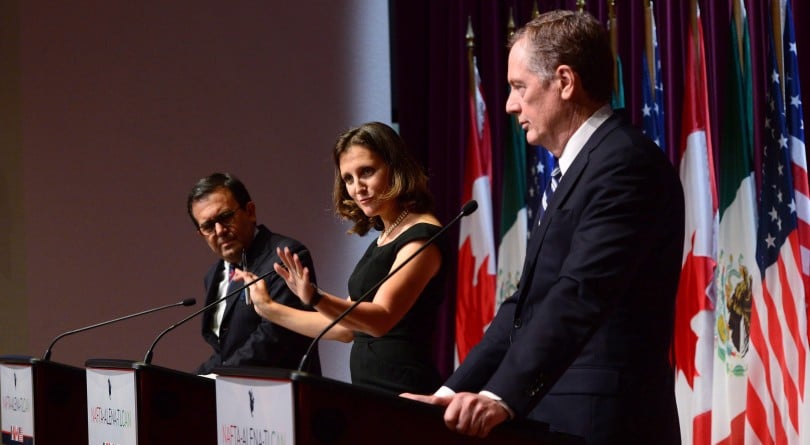 The re-negotiation of the North American Free Trade Agreement (NAFTA) has proceeded with the punctuality and scenery of Ottawa’s Macdonald–Cartier International Airport on a particularly snowy winter day: Cascading delays, missed connections, numerous cancellations, and rushing politicians and staffers as far as the eye can see.

Since the timetable for the talks was agreed in July 2017, both informal and set finishing dates have flown past without even a preliminary agreement between all three of the U.S., Mexico and Canada. Foreign minister Chrystia Freeland has effectively become a part-time resident of Washington, D.C., flying frequently between the capitals for yet more discussions with U.S. Trade Representative Robert Lighthizer.

Finally, on Aug. 27, 2018, the U.S. and Mexico concluded an accord on a number of issues of mutual interest, and President Donald Trump set a deadline of the end of the week for Canada to come on board. But that Friday came and went without a deal being reached, just another deadline missed.

It’s almost as though the red circles that the Trump administration, primarily, has been putting on the calendar don’t really mean anything. Our own government hasn’t been particularly keen to talk about last-possible-dates for the deal. “We have always felt that imposing artificial deadlines was not necessary from the Canadian standpoint,” Freeland said in January.

Here are a few of the dates NAFTA negotiations were supposed to be done by, and what U.S. and Canadian officials said when they were missed.

The timeline for the re-negotiation was set in July 2017, with seven rounds of talks planned at three-week intervals. While Ligthizer insisted he was not setting a deadline for the deliberations, he did express hope that they would be concluded by the end of the calendar year.

U.S. reaction: “I am surprised and disappointed by the resistance to change,” Lighthizer said at an Oct. 17 press conference put on by the three country’s principal negotiation participants. On Nov. 22 he complained that there had been “no evidence that Canada or Mexico are willing to seriously engage on provisions that will lead to a rebalanced agreement.”

Canada reaction: At the same Oct. 17 media event, Freeland said the U.S. was making asks that would “turn back the clock on 23 years of predictability, openness and collaboration.”

Amidst the otherwise feisty fourth round of negotiations in October, Lighthizer suggested that the term of the talks be extended through the end of the first financial quarter of the following year. Canada’s ambassador to the U.S. David MacNaughton thought the timeline plausible as of Feb. 5, saying the sides had “made tremendous progress on some of the less spectacular things.”

U.S. reaction: As early as Jan. 11, Trump signalled he wasn’t too focused on the Q1-end target. “I’m leaving it a little flexible because they [Mexico] have an election coming up,” he told the Wall Street Journal. “There’s no rush.”

Canadian reaction: “I thought that was a sensible suggestion from the President,” Freeland said the next day.

Bloomberg reported on Apr. 2 that Trump wanted an “agreement in principle” that he could unveil alongside the other two implicated heads of government at the Summit of the Americas in Lima, Peru, on this date. But six days later, sources told media outlets that talks had not progressed far enough to allow such an announcement.

U.S. reaction: Trump cancelled his planned appearance at the Summit on Apr. 10, and two days later denied targeting it as the site of a deal signing, telling reporters, “I keep reading from the fake news media that we’re pushing it, we’re not pushing it,” latter adding, “there’s no timeline.”

Canadian reaction: “Canada is committed to concluding a modern, mutually beneficial NAFTA as soon as possible,” a spokesperson for Freeland told Bloomberg at the time of the original story. Later the same month, she characterized the stage of talks the sides have arrived at as “a sort of perpetual negotiating round.”

House of Representatives speaker Paul Ryan wanted an agreement by this date. “We have to have the paper” by then to allow the current Congress to consider it in the lame duck session following the November midterms, the Wisconsinite reportedly told the Ripon Society, a Republican-affiliated organization, in D.C. on May 9.

U.S. reaction: Lighthizer issued a statement on May 17 saying the countries were “nowhere near close to a deal,” with IP and agriculture among the big outstanding issues

Canadian reaction: Getting to an agreement “will take as long as it takes,” Freeland said on May 14.

When no deal was reached by his May 17 target, Ryan reportedly said that a couple of weeks of “wiggle room” might be found within his timeline, which works out to around this date. But he warned that there was “not an indefinite amount” available.

Canadian reaction: Freeland was scheduled to be in D.C. on May 29 and 30, talking to administration officials about U.S. steel and aluminium tariffs, but also trying to kick-start NAFTA negotiations once again. “There is definitely a path forward and we are making progress,” she said after meeting Lighthizer.

The White House must give Congress a 90-day heads up of its intent to sign a trade deal, and Mexican president Enrique Peña Nieto leaves office on Dec. 1. To enable him to sign the revised agreement, the Trump administration had to deliver its notice letter by this date.

U.S. reaction: The letter was sent. The president’s press release said he’d signalled to the legislative branch his “intention to enter into a trade agreement with Mexico—and with Canada if it is willing, in a timely manner.”

Canadian reaction: “We’re continuing to work very hard and we’re making progress, but we’re not there yet,” Freeland said on Aug. 31.

The text of the agreement must be published at least 60 days before the parties indicate their assent in ink, so assuming getting Peña Nieto’s name on the document is still a priority, the specifics of the final deal—including whether or not Canada is in—will have to be worked out by this date.