Where to watch the French-language leaders debate

Here's everything you need to know about the first of this week's two leaders' debates, from what's on the agenda to how to watch it live 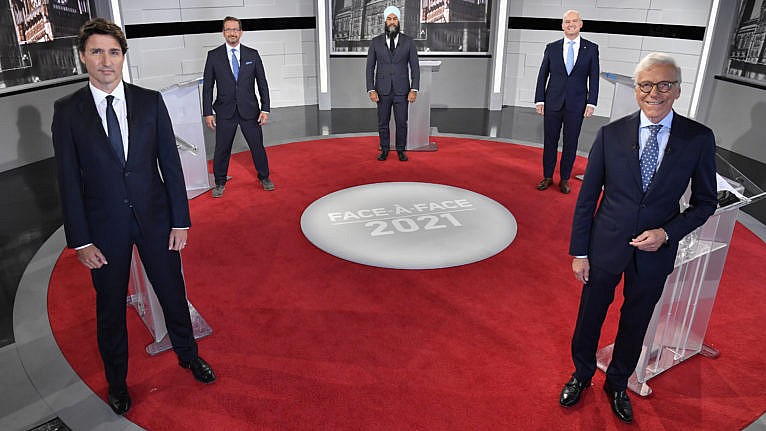 Trudeau, Blanchet, Singh, and O'Toole pose for a photo prior to the TVA leaders' debate on Sept. 2, 2021 in Montreal (Martin Chevalier/CP)

The five leading party leaders will face off on a debate stage twice this week, on back-to-back nights. First up is the French-language debate on Wednesday, Sept. 8. For all the details of how the evening will work and how you can watch, we have you covered.

The event is taking place at the Canadian at the Canadian Museum of History in Gatineau, Que., just across the Ottawa River from Parliament Hill, but given COVID-19 protocols, there will be no live audience this time around. The debate runs from 8 to 10 pm EDT.

You have many, many options. Networks such as CBC, CTV and CPAC will air the debate live, and there are multiple online streaming options too, including Politco, YouTube and APTNnews.ca. There is a full list of options here, including simultaneous translation into English and several other languages.

Leaders’ Debates Commissioner David Johnston (you may remember him from such previous roles as governor general) determined that to be included, a leader’s party must meet one of the following criteria: on the date the election is called, the party must have one MP in the House of Commons who was elected under that party’s banner; the party must have received at least four per cent of the popular vote in the previous federal election; or, five days after the election is called, the party must hold at least four per cent national support, as determined by an average of the horse race results from leading polling organizations.

That leaves out, for example, People’s Party of Canada Leader Maxime Bernier.

The debate will consist of five segments—focused on climate; cost of living and public finances; Indigenous peoples, cultural industries and cultural identity; justice and foreign policy; and the pandemic and healthcare—each including a question from a voter, a one-on-one debate, a three-way debate, a question from a journalist to each leader and a free-for-all debate among all the leaders on stage. Expect plenty of shouty cross-talk.

What if I’m feeling nostalgic and/or geeky?

You can watch key clips or the 2019 Leaders’ Commission debates in their entirety here. You can watch the 2019 Maclean’s/Citytv National Leaders Debate here and the 2015 Maclean’s debate here.