Who is on Team Wilson-Raybould?

Where are the battle lines being drawn inside the Liberal Party between the PM and the former cabinet minister? Twitter offers some clues. 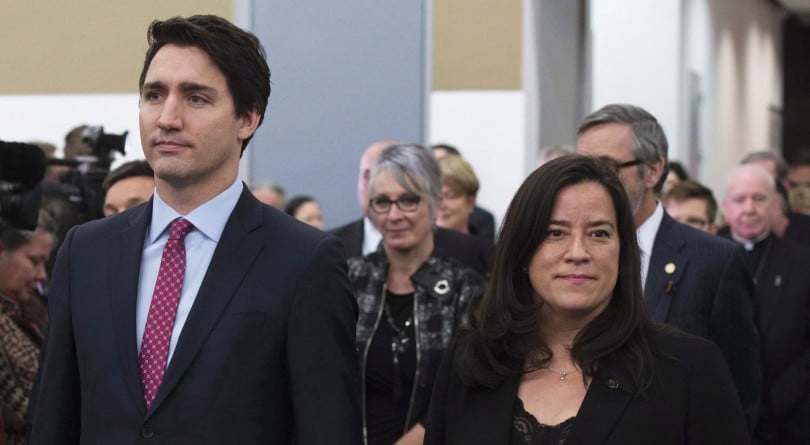 Trudeau and Wilson-Raybould take part in the grand entrance as the final report of the Truth and Reconciliation commission is released on Tuesday, Dec. 15, 2015, in Ottawa. (THE CANADIAN PRESS/Adrian Wyld)

It all feels a little bit high school, honestly, pawing through the social media posts of federal politicians to understand where battle lines are being drawn and whose loyalty belongs where. But in the absence of anyone giving a straight answer—or Jody Wilson-Raybould saying anything at all—about allegations that the Prime Minister’s Office leaned on her as attorney general to help out Quebec construction giant SNC-Lavalin, this is what we’ve got.

But there’s also the fact that a handful of Liberals have been very outspoken on their feelings, and the now-resigned cabinet minister at the centre of the controversy seems adept at sending semi-covert messages in her public statements, loud enough to turn subtext into text.

On Sunday—well before the latest twist in the conflict between the former Justice Minister and Justin Trudeau led to her resignation from cabinet—Celina Caesar-Chavannes, Liberal MP for Whitby, tweeted effusive praise for Wilson-Raybould and identified a misogynistic undercurrent in reports that she was difficult to work with.

As someone on the inside, who knows @Puglaas, I can tell you that she is fierce, smart and unapologetic. When women speak up and out, they are always going to be labelled. Go ahead. Label away. We are not going anywhere. #IAmWithHer #StandUp #ISeeYou https://t.co/BQWeiitn9R

The following day, Caesar-Chavannes’s caucus colleague, Wayne Long, MP for Saint John—Rothesay, tweeted a long statement supporting opposition calls for a full investigation through the justice committee, and saying he was “deeply unsettled” by the allegations in the Globe story.

My statement regarding the allegation of attempted political interference in the criminal prosecution of SNC-Lavalin:#cdnpoli pic.twitter.com/FJ382koggu

On Tuesday morning, word suddenly roared around Ottawa that Wilson-Raybould had resigned from cabinet, a neat thumb in the eye of Trudeau’s marks the day before that her ongoing presence in his cabinet “speaks for itself.” Just before lunchtime, she tweeted the news herself, posting a resignation letter in which she told Trudeau she was stepping down “with a heavy heart,” but “implementing a positive and progressive vision of change on behalf of all Canadians ” was unfinished work she remained devoted to.

With a heavy heart I have submitted my letter of resignation to the Prime Minister as a member of Cabinet… https://t.co/Ejjh8smwYO

That evening, Jane Philpott, president of the treasury board and one of Trudeau’s cabinet stars, tweeted gratitude to her friend and colleague, highlighting several prominent pieces of legislation they had shaped together. Wilson-Raybould re-tweeted the message.

You taught me so much – particularly about Indigenous history, rights and justice. I’m proud of the laws we worked on together – C14 (assisted dying), C37 (harm reduction), C45 (public health approach to cannabis) and so much more. I know you will continue to serve Canadians. pic.twitter.com/veQ0ATPcz1

That evening, Wilson-Raybould also tweeted a link to an interview with her father, Bill Wilson, in which he said her demotion was “a clear slap in the face.” If there had been any doubts about how she felt about the blunt interviews he had been giving, they were put to rest by her emotional thanks for his “unwavering support.”

Thank you to my pappa for your unwavering support. Happy your eye surgery was successful. See you soon – nothing like being on the TV talking ‘bout you and me. ❤️ https://t.co/aIak3DdTqV

Canada’s recently-fired ambassador to China, John McCallum, re-tweeted Philpott’s tribute and added his own remarks, though he later clarified in a tweet to a Global journalist who declared him to have sided with the former minister, “No, I’m a strong supporter of PM, but was commenting on effective passage of legislation that was important to me and people close to me.”

You two were a great team, esp on assisted dying. https://t.co/b2QWCHLkon

Nunavut MP Hunter Tootoo, who sits as an independent, tweeted his support for a “respected, strong, Indigenous leader” and said he was disappointed but “not surprised” by the PMO’s handling of the issue.

Jody Wilson-Raybould is a respected, strong, Indigenous leader. She did her job extremely well and she has a lot to be proud of. Not surprised, but disappointed in the PM and his staff for their handling of this issue. #Nunavut @Puglaas @JustinTrudeau pic.twitter.com/24U8vXW8Wn

Following Wilson-Raybould’s resignation, the hashtag #StandwithJody became the online rallying cry of her supporters. The Vancouver-Granville MP has “liked”  dozens of supportive tweets penned by constituents, well-wishers and people she had worked with in one capacity or another.

She also liked this Maclean’s piece by Anne Kingston, detailing the subtle and not-so-subtle signals in her resignation letter, suggesting that the former minister knows exactly what she is doing and understands the defiant, reproachful message politics watchers are hearing in the few words she has said since the whole thing broke open.