Why a 'values' test for immigrants won't fly in Canada 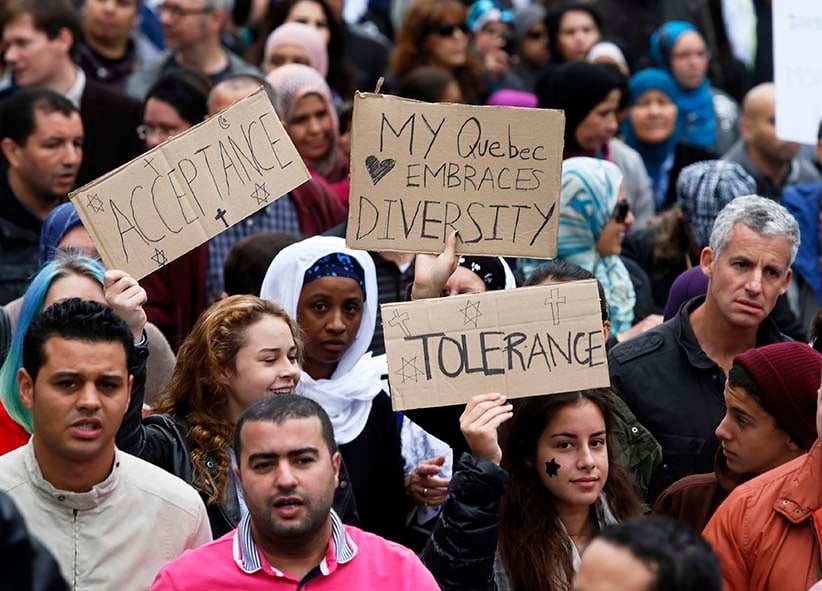 Demonstrators hold signs as they protest against Quebec’s proposed Charter of Values in Montreal, September 14, 2013. Thousands took to the streets to denounce the province’s proposed bill to ban the wearing of any overt religious garb by government paid employees. (Christinne Muschi/Reuters)

On Nov. 7, 2013, Quebec’s Parti Québécois government introduced a bill that would ban all “conspicuous” religious accoutrements and apparel from the bodies of anyone receiving a paycheque from the provincial government. Officially, the government wished to “affirm the common values of secularism, the State’s religious neutrality and equality of the sexes,” as PQ minister Bernard Drainville put it at the time.

Unofficially, the so-called “charter of Quebec values” was a pure electoral play for the hearts and minds of Quebec’s francophone Baby Boomers. Long the PQ’s client base, the Boomers had grown weary of the party’s sovereignty obsession. Luckily for the PQ, they were also wary of the apparent droves of immigrants demanding kosher meals at the hospital and pork-free baked beans at the cabane à sucre.

In theory, the Charter was the perfect balm for the PQ. It allowed it to rally its base around an idea that had nothing to do with sovereignty, and scapegoat Quebec’s immigrants and cultural communities—neither of which would vote for the PQ anyway. Surely, electoral glory would ensue.

It didn’t. Five months later, the party suffered its worst electoral result in terms of popular vote in its 44-year history. Those Boomers, it turned out, were far more freaked out at the state of Quebec’s economy and healthcare system than on headscarves, yamulkes and novelty-sized crucifixes.

For any Canadian politician considering a swing into the politics of ethnic nationalism—hello there, Conservative MP for Simcoe-Grey Kellie Leitch!—the Parti Québécois example offers several lessons.

WATCH: Will a values debate tear apart the Conservatives?

First, never trust the initial flash-bang media coverage, and corresponding uptick in the polls. These are empty carbs that won’t sustain a campaign.

Second, don’t overestimate popular support for populist crutches like, say, “screen[ing] potential immigrants for anti-Canadian values,” which Leitch suggests the federal government should explore. Support for such abject flag suckery is as wide as it is shallow. That is to say, equating “immigrants” and “anti-Canadian values” may make for a boffo political slogan, but ultimately it isn’t as compelling as “The economy is tanking” or “How was that eight-hour wait in the emergency room last night?”

Finally, consider the long-term implications for your political brand before you imply the more than 270,000 immigrants who arrive here every year constitute a hotbed of anti-democratic values. The Parti Québécois didn’t perform this simple exercise in 2013, and it is suffering the consequences to this day.

Why, it was just yesterday that PQ leadership candidate Jean-François Lisée was complaining how people see the Parti Québécois as “an old person’s party.” This didn’t happen by accident. By scapegoating a huge swath of the 50,000 who come to the province every year, the PQ has essentially gifted an ever-growing voting bloc to the Liberals. “Chickens don’t vote for Colonel Sanders,” as sovereignist Jean Dorion put it in 2012.

MORE: Evan Solomon on the Tories’ identity crisis over identity

Clearly, Leitch isn’t much of a history buff, of the PQ or even of her own party. Had she looked back at, say, the lead-up to the 2015 federal election, she would have remembered that the Conservatives tried to coax the three-headed jihadist/terror/niqab hydra into existence for an expected electoral windfall.

Hell, she needed only to look back to less than a year ago, when she and immigration Chris Alexander launched a “barbaric cultural practices hotline” to further juice anti-immigrant sentiment going into an election that the Conservatives ultimately lost. In Quebec, where Stephen Harper et al. went all in on its anti-niqab gambit, the Liberals had their best showing in nearly two decades. 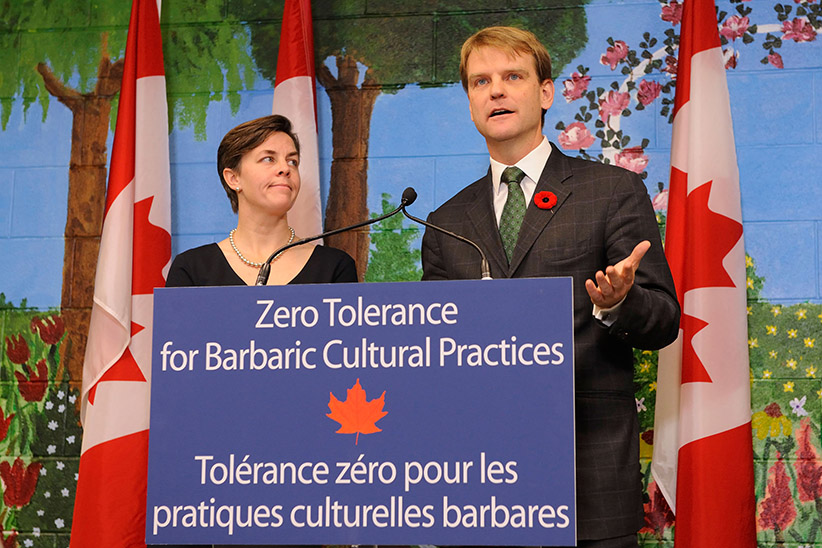 The point isn’t just that using fear of immigration as a political weapon is wrong. It’s that it doesn’t generally work in this country. Among Harper’s earliest and canniest political moves was to sand the rough edges off the old Reform party after it was shoehorned into with the old Progressive Conservatives, then (mostly) muzzling the few crazies who managed to get elected. It worked amazingly. Demonstrably, going anti-niqab 12 years later didn’t.

With her loyalty test of new immigrants, Leitch has joined the ranks of social conservative leadership candidate Brad Trost, who is campaigning largely on the evils of gay marriage. The two of them represent what have become unelectable rumps of the Conservative party. And because she, like Trost, stands little if any chance of becoming its leader, the party will have to contend with the fallout from her campaign.

If there’s anything positive to come out of this whole debacle, it’s that the party seems to realize as much. Three of her fellow candidates have come out strongly against Leitch’s proposal, as has interim leader Rona Ambrose. “You make us feel unwelcome,” Conservative leadership hopeful Deepak Obhrai said about Leitch. Obhrai might have added: you make us unelectable as well.