Why McKinsey & Co. is helping Ottawa out, pro bono

International consulting firm McKinsey is lending a big helping hand to Ottawa’s economic advisory council—for free. What's in it for them? 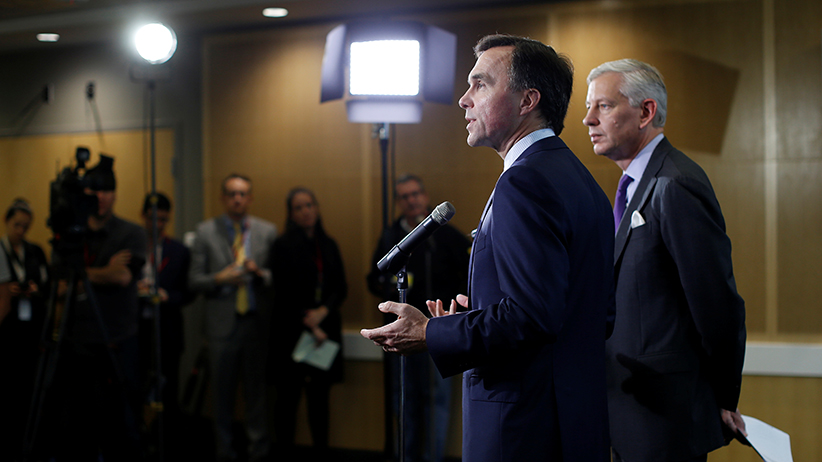 There was no question about the biggest draw at a one-day economic “growth summit” put on by the Public Policy Forum last month in Ottawa. Despite a roster of speakers and panelists that included top-tier politicians like Finance Minister Bill Morneau, and corporate heavyweights like GM Canada president Stephen Carlisle, the buzz in the crowd of government and business insiders was all about the chance to hear from Dominic Barton, global managing partner of the international consulting firm McKinsey & Co.

Barton would be an attraction at any gathering of this sort, in any world capital. As the London-based head of McKinsey’s storied network, he represents influence that spans continents and straddles the public and private sectors. But he’s also a Canadian, and currently chairs Morneau’s advisory council on economic growth—a blue-chip group assembled to provide Justin Trudeau’s government with big ideas for creating wealth. “It’s a team,” was how Barton described the council. “We’re all equal on it—14 people from the business world, the academic world, from different parts of the world.”

The council does boast serious depth. Its volunteer members range from Michael Sabia—who guides Canada’s second largest pension fund as head of the Caisse de dépôt et placement du Québec—to Elyse Allen, the president of GE Canada. Still, Barton’s role is singular. Beyond his personal aura, there’s his firm’s unannounced behind-the-scenes input. The Department of Finance confirmed to Maclean’s that McKinsey consultants are providing the council, which has no budget of its own, with “research, analysis and administration”—all for free.

Why would a private firm work pro bono to shore up a political initiative like the growth council? Those who have studied McKinsey say this sort of largesse has long been standard practice. Duff McDonald, the New York-based author of The Firm: The Story of McKinsey and Its Secret Influence on American Business, published in 2013, says McKinsey often volunteers expertise as a way of making sure the firm is in the room when big ideas are being hatched. McDonald says he started out suspicious of the strategy, but came to see McKinsey as offering genuine value in return for relationship-building. “Yes, they are all about influence, all about positioning, all about getting themselves where they need to be when the money is at hand,” he says. “But they also do this stuff all the time.”

One obvious aim is to insert McKinsey’s priorities into the federal policy playbook. In recent years, for instance, the firm has been urging huge infrastructure investments in many countries—estimating the world needs US$57 trillion in new infrastructure over the next 15 years. Not surprisingly, the first set of recommendations from Barton’s council, released on Oct. 20, featured a call for Ottawa to put $40 billion into a new national infrastructure bank, with the hope of luring four times that amount in private capital.

Barton said the Canadian government should focus on projects that offer a clear payback, like transportation systems, electricity grids and pipelines. McKinsey is hardly alone in making public-private infrastructure co-operation a goal. Sabia is also a vocal advocate of the concept, and so is another prominent council member, former CEO of the Canada Pension Plan Investment Board Mark Wiseman, who jumped to the private sector earlier this year as a senior managing director of BlackRock Inc., the world’s largest asset manager.

For institutional investors, including McKinsey clients, there’s an obvious attraction in the prospect of upfront government money providing a measure of security in what might otherwise look like risky infrastructure ventures. There’s even a Canadian model for the approach, Infrastructure Ontario, launched a decade ago—where major projects happen to be overseen by a former McKinsey partner.

Barton is an assured salesman for this sort of far-reaching proposal. At 54, with a trim, tall runner’s build, and silver hair that pairs well with British tailoring, he fully looks the part. He speaks with urgency, but in an understated way that’s sometimes chalked up, when he’s in New York or London, to his Canadian roots. (He was born to missionary parents in Uganda and grew up in British Columbia.) His consulting credentials are cosmopolitan: Before rising to McKinsey’s top job, he headed its Asian operations, based in Shanghai, from 2004 to 2009, earning a reputation for grasping the world’s fastest-expanding markets.

Now Barton has come home, if only on a part-time basis, to try to reshape Canadian policy, bringing to bear all his accumulated prestige and polish, along with some time-tested McKinsey methods.