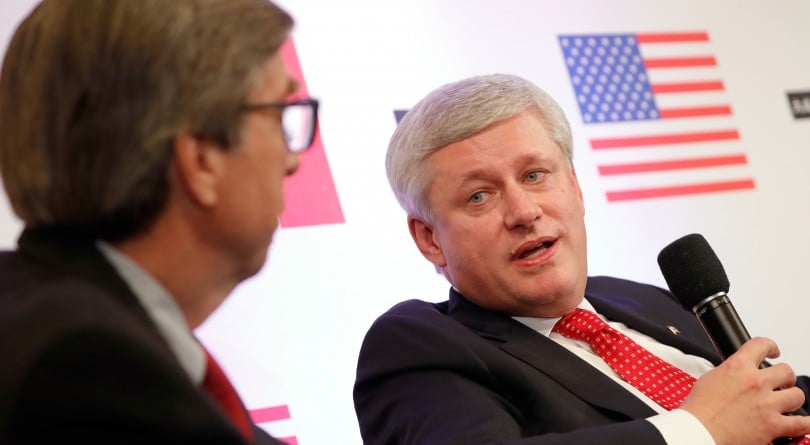 In Canada, Viktor Orban isn’t a household name. So when Orban’s notorious populist party, called Fidesz, won re-election in Hungary on Apr. 8, Canadian commentary didn’t amount to much. At least, not until former prime minister Stephen Harper, in his new role chairing the International Democrat Union (IDU), an umbrella organization for centre-right parties around the world, woke us up by tweeting, “Congratulations to Prime Minister Viktor Orban and Hungary’s Fidesz for winning a decisive fourth term! The IDU and I are looking forward to working with you.”

I emailed Harper’s office asking about the tweet, and his assistant noted in response that the IDU’s customary practice of issuing congratulatory messages whenever one of the groups’s member parties wins an election predates Harper getting the job only a couple of months ago. And Fidesz is indeed an IDU member. Still, was it really necessary to remind the world that Orban, who has systematically undermined Hungary’s previously thriving democracy, has now won four times? Was that exclamation point an integral element in established IDU congratulations protocol?

I’m only partly joking about parsing the fine points of the tweet. Tone matters. If this were only a pro forma note, Harper is more than capable, as anyone who followed him in Canadian politics can attest, of draining any message of liveliness or affect. And, by his own stated standard, he would have had grounds for keeping any hint of enthusiasm out of this one. After all, Harper has said that his aim as IDU chair is partly “ensuring that we address the concerns of frustrated conservatives and that they do not drift to extreme options.”

READ MORE: Hungary: A new threat to the EU

If we’re talking extreme options, Orban looks like a prime example these days. Numerous credible critics charge that he has coopted Hungary’s courts and schools, skewed its electoral system to his advantage, all while voicing admiration for Turkey and China, and criticizing Western European tolerance for Muslim immigration. Still, political science professor Achim Hurrelmann, director of Carleton University’s Institute of European, Russian and Eurasian Studies, says Orban’s core message—beyond his destructive domestic tactics—is being heard by conservatives outside Hungary. “[Fidesz] has primarily been anti-migration, emphasizing the Christian roots of Europe, and being very much against diversity,” Hurrelmann told me in an interview. “In that position, they find common ground with some other mainstream conservative parties.”

I can’t guess if Harper’s calculation in issuing that tweet took into account an awareness that Orban, dangerous as he may be, isn’t irrelevant beyond Hungary. Whatever Harper’s reasoning, he has undoubtedly damaged his reputation among many who view Orban with justifiable distaste and alarm. I’m reminded again of the steep learning curve Harper had to climb after barely travelling outside Canada, and concentrating almost entirely on domestic issues, rather than foreign policy, before his 2006 election win. “Since coming to office,” he told Maclean’s in 2011, “the thing that’s probably struck me the most in terms of my previous expectations—I don’t even know what my expectations were—is not just how important foreign affairs/foreign relations is, but, in fact, that it’s become almost everything.”

It’s worth noting that Andrew Scheer seems to be on his own version of that learning curve now. In this recent interview with my colleague Paul Wells, the Conservative leader surprised me by going on at some length about his reasons for supporting Brexit. Scheer spoke about how staying in the EU impinged on British sovereignty and embroiled Britain in the Brussels bureaucracy. He scoffed at “this notion that somehow they would lose access to the European market.” He repeated the debunked canard that EU rules required a certain curvature on bananas.

To my ear, all this pro-Brexit blather was by far the least convincing part of Scheer’s performance in that interesting conversation. Conservatism’s most treacherous currents are global, especially in the age of Donald Trump. In Harper’s congratulatory message to Orban, and Scheer’s laudatory position on Brexit, the difficulty finding a solidly respectable place to stand in that international discourse becomes glaringly obvious. These issues might not seem central to Canadian voters in any federal election, but, as Harper reminded us, they soon are to whoever wins one.