Will every federal party agree to a ban on conversion therapy?

Politics Insider for Oct. 2: The Liberals re-table a bill that would ban the widely condemned 'therapy,' there's a brand-new Heritage Minute and the feds get in the business of televised nostalgia 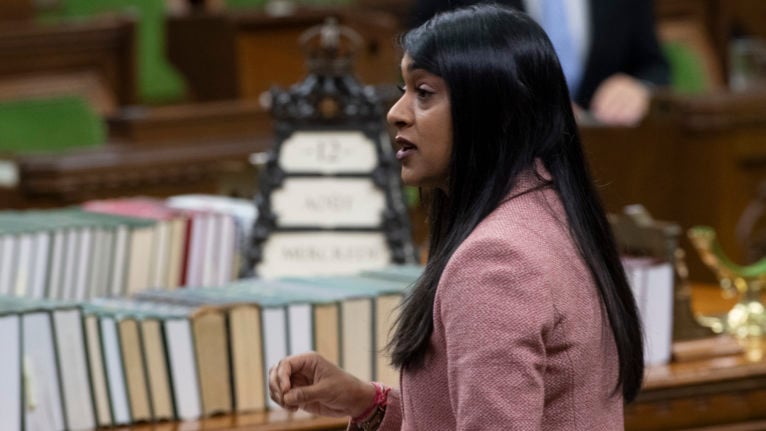 Diversity and Inclusion and Youth Minister Bardish Chagger rises during a sitting of the Special Committee on the COVID-19 Pandemic in the House of Commons in Ottawa, Wednesday, Aug. 12, 2020. (Adrian Wyld/CP)

Yesterday, Bardish Chagger—the minister for diversity, inclusion and youth—re-tabled a bill that would ban conversion therapy—a widely condemned practice that aims to alter the sexual orientation or gender identity of people who are forced into it. Tory leader Erin O’Toole complained that while he opposes conversion therapy, the bill could “criminalize talking.” While Liberals insist the bill protects people who simply offer support to young people. O’Toole appeared to disagree, saying his party would offer “very simple amendments that could fix this.” He offered no further detail, so stay tuned when Bill C-6 is sent to committee.

$10 billion for 60,000 jobs: That’s what Prime Minister Justin Trudeau announced yesterday alongside Infrastructure Minister Catherine McKenna and Canada Investment Bank board chair Michael Sabia. The three-year plan will spend federal dollars on new infrastructure that “connects more households and small businesses to high speed internet, strengthens Canadian agriculture and helps build a low-carbon economy.” The money includes $500 million to “accelerate high impact infrastructure projects in which the CIB expects to make a long-term investment.” None of this money is, at this point, attached to specific projects. That is, of course, the hard part.

The Canada Infrastructure Bank is in no sense a bank anymore, writes Paul Wells, about the announcement. Since its creation in 2016, the CIB had big plans to multiply public dollars by matching it with private or institutional investments.

In the end the clouds didn’t open and no part of that $16 trillion in global free money dampened the shores of Canada. This is not a tragedy nor even necessarily evidence of mismanagement: if turning on a gigantic global cash spigot were easy, probably somebody would have done it before Sabia, Morneau and Trudeau thought of it. No matter. The Bank has quietly adopted a new business model, in which the government money goes first and everyone simply hopes the private capital will show up later.

How much do Canadians dislike Donald Trump? A lot. A new 338Canada/Léger poll shows that the overwhelming majority of Canadians would prefer Joe Biden over the incumbent president. The only exceptions were in Alberta, where two-thirds of respondents still supported Biden, and among Conservatives, 59 per cent of whom still picked Biden. Maclean’s contributing editor Philippe J. Fournier explained what this means for Canada’s Tories:

Another new Léger poll revealed some complicated electoral feelings in British Columbia. The poll found that 47 per cent of voters favoured John Horgan’s NDP (compared to 31 per cent for the Liberals), 49 per cent opposed the election call altogether, and 49 per cent would also prefer a majority government. The results are good news for Horgan, who also polled as the most popular leader. But they’ll only reinforce his cynical critics who dismiss him as an opportunist. (B.C. Conservatives, who were mostly invisible in the 2017 election, poll at nine per cent—double 338Canada’s current projection.)

Saskatchewan is the new Alberta: An Abacus poll that recorded steady Liberal support at 35 per cent, amid a two-point Tory decline to 30 per cent, also published a regional breakdown. More Albertans than Saskatchewanians plan to vote Conservative, but fewer respondents from Canada’s most four-sided prairie province approve of the government’s job. Only 33 per cent of Saskatchewan respondents gave a thumbs up, less than Alberta’s 36 per cent.

As small businesses struggle to pay rent today, Finance Minister Chrystia Freeland doesn’t yet have a replacement for the federal-provincial program that gave $1.68 billion to 120,000 businesses that needed the help. But Freeland tweeted that something is on the way. “We are working with the provinces, territories, municipalities and businesses to do this in the best way possible,” she said. “We are listening to you and we will have more to announce very soon.”

Yesterday, Jimmy Carter turned 96 years old. The Atlanta Journal-Constitution reported that a spokesperson for the former U.S. president said Carter and his wife, Rosalynn, “have sequestered themselves” in their home in Plains, Georgia, and will “spend a quiet day together.” Last autumn, as he awaited brain surgery, news cameras captured video of Carter building Habitat for Humanity homes in Nashville. By December, he was back teaching Sunday School.

If nostalgia can get people to take cybersecurity seriously, the e-spies over at the Communications Security Establishment might have hit the jackpot. Enter the agency’s 55-second opening intro for Device Appreciation Time, a takeoff on a vintage ’80s-era sitcom. Perhaps the most concerning detail is the Phone character—yes, devices themselves are characters—only has 25 per cent of its battery power. Maybe the next federal video should be Charles Isn’t Charged, a Public Healthy Agency of Canada faux-sitcom in which the main character obsessively charges his phone so his COVID Alert app can notify him of exposure.

That wasn’t even the only nostalgia-fuelled ad pushed out by the feds yesterday. Two words: house hippos.