With a second wave underway, Trudeau lays out his vision

Politics Insider for Sept. 24: Julie Payette read the Speech from the Throne, which clocked in at more than 6,000 words, during a ceremony that was normal and not normal. Plus, Trump won't commit to a peaceful transfer of power. 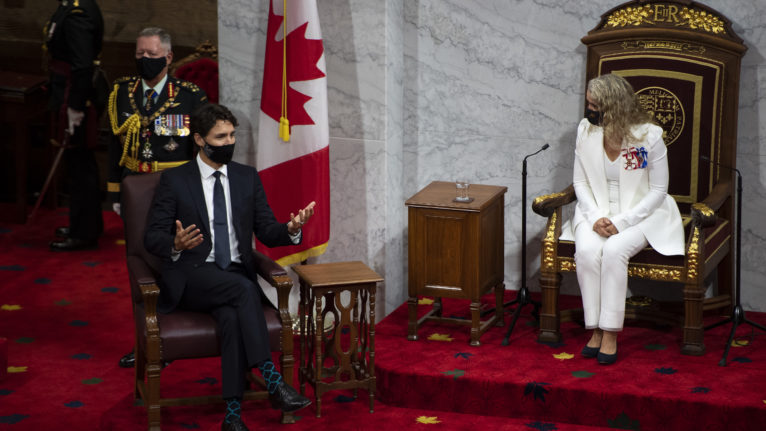 Trudeau speaks with Payette ahead of her delivery of the Speech from the Throne on Sept. 23, 2020 (Justin Tang/CP)

Say what you will about Throne Speeches, which pitch big ideas to the nation without revealing their exact cost to the federal treasury, but the time seems right for a parliamentary reset. The Conservatives have a new leader, Erin O’Toole, and the global pandemic’s second wave is starting to hit some of Canada’s biggest cities and provinces—leaving an infected O’Toole, along with Bloc leader Yves-François Blanchet, in its wake.

As Canada braced for whatever’s next, it was up to Governor General Julie Payette to recite the government’s bulky agenda to a couple dozen senators and one-third as many MPs listening from the edge of the Senate chamber. And bulky it was. Two hours after the speech, Prime Minister Justin Trudeau took to the airwaves where he built on Payette’s words (and, perhaps, secured the evening’s sound bites at the GG’s expense). O’Toole, in his own televised response, vowed to vote against the speech when it came to a confidence vote in the Commons. Blanchet all but committed to doing the same. The NDP’s Jagmeet Singh, in his own response, declined to declare his vote either way, saying only the speech didn’t (yet) have everything his party needed to support it.

But before we get to what’s next, here’s Maclean’s analysis of yesterday’s main event.

Five key takeaways from the Throne Speech: It was a speech about almost everything. More than 6,000 words, twice the length of the last speech and seven times longer than the average length of the first 10 since Confederation. Marie-Danielle Smith writes in Maclean’s about all the billion-dollar promises couched in campaign rhetoric matched with pandemic-era prose. And all of it presented as an alternative to the darkest timeline:

The Speech from the Throne, delivered by beleaguered Governor General Julie Payette, was presented as a dichotomy between the sweeping Liberal agenda and any number of unspeakable alternatives. “Do we move Canada forward, or let people be left behind?” Payette uttered, the only person in a socially-distant Senate chamber not wearing a mask. “Do we come out of this stronger or paper over the cracks that the crisis has exposed?”

The speech where everything and nothing were normal: There was a lot of normalcy to yesterday’s main event. Protesters greeted Trudeau. Most of the traditional pageantry was salvaged to the extent possible. But it’s not every day you see a Prime Minister and a Governor General elbow-bump the chief justice of the Supreme Court. And everyone in the building was wearing a mask save for the GG and the people interpreting her in both official languages. Behind the scenes, too, your newsletter correspondent watched a peculiar scene play out:

The televised broadcast cut away from the Senate the moment Peters left the room. He took any and all pomp with him, leaving the Senate with precious little to do before he came back. The chamber lapsed into an impromptu cocktail party—sans cocktails—where no one looked quite comfortable enough to make the first move. For those 15 minutes, the esteemed heads of every branch of government had absolutely nothing of consequence on their agenda. So Payette, Trudeau and Wagner did what anyone else would do. They turned to small talk.

Paul Wells on the Throne Speech: Maclean’s senior writer points out that much of Trudeau’s plan isn’t new. His televised address could just as well have been delivered on the floor of the House of Commons and it sure appeared the PM was simply using the airtime to remind the audience that, even if Payette delivered yesterday’s speech, he deserves the news clip. All of this raises questions about Trudeau’s motive for resetting Parliament.

So to sum up: the Prime Minister fired his finance minister for counselling caution and has now delivered caution. He shut Parliament down so he could signal a bold new direction, and is now continuing the work he was already doing, though the same cannot yet be said for the parliamentary committees that were investigating him. He went on TV so you wouldn’t be reminded of a nasty workplace dispute at the GG’s residence. When I write about such things, I get called a cynic, as though I were the one who thought of doing them. Please wear a mask. And download the app, he’s right about that.

Fiery debates about the future of the country on the House floor are in the near future—reviews from the West, for example, dismissed the Throne Speech as a clunker—as are opposition attempts to revive the summertime WE scandal. But yesterday all the leaders stuck to TV. Trudeau reiterated his government’s plans, confirmed a second wave of the pandemic “is already underway,” and warned that this fall’s coronavirus surge could be “much worse” than this country’s frustrating spring. Trudeau said families most likely won’t share a joyous Thanksgiving, but he said we “still have a shot at Christmas” if Canadians can, once again, collectively flatten the curve. (Read Trudeau’s full remarks.)

O’Toole, who was entitled to a first rebuttal, had recorded a message earlier in the day outside his Ottawa home where he and his wife, Rebecca, are self-isolating as they fight off infection. O’Toole’s full remarks are here. Blanchet, from his own home in Shawinigan, was next up. He threw down an ultimatum: grant unconditional health transfers to the provinces and Quebec, or else the Bloc Québécois will vote against the speech. And Singh, whose party is Canada’s best shot at avoiding a fall election, was last on the list. These were Singh’s full remarks.

In other news: Ethics commissioner Mario Dion has dismissed a Conservative allegation that Trudeau’s chief of staff, Katie Telford, and her husband, Rob Silver, plotted with a fellow Liberal insider, Mike McNair, to mutually benefit from Silver’s attempts to lobby for changes to the federal wage subsidy that would help his mortgage financing company, MCAP, where he’s served as VP since January. The lobbying commissioner has not yet sounded the all-clear.

And south of the border: At a press conference, President Donald Trump was asked if he’d commit to a peaceful transfer of power after the presidential election this November. His response: “We’re going to have to see what happens.” Watch that clip here.