Turkey’s election should be a warning for Western democracy

Adnan R. Khan in Istanbul: Erdogan's brand of populism still wins, and it's an example of what happens in a country that has no political centre 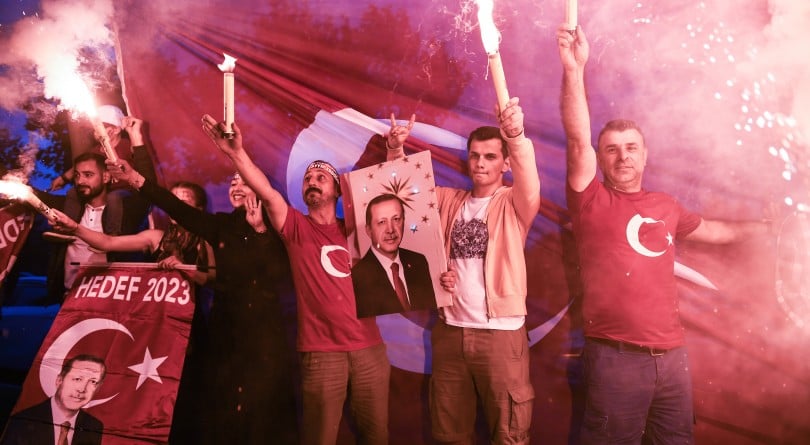 With so much on the line, it was no wonder Turks came out to vote in record numbers—more than 50 million, accounting for more than 86 per cent of eligible voters. Not too shabby for a nation whose democracy is supposed to be hanging by a thread.

The results, however, were less impressive, at least from the opposition’s perspective. Erdogan, whose authoritarian tendencies have irked the international community and put the fear in Turkey’s secular minority, took the presidency again with 52.6 per cent of the vote. Ince, who energized the opposition with his calls for national unity, lagged far behind at 30.6 per cent.

Meanwhile, in the parliamentary elections, Erdogan’s conservative AK Party, which has ruled the country since 2002, took 42.6 per cent of the vote while its alliance partner, the ultra-nationalist MHP, took 11.7 per cent, helping secure an alliance majority.

But not all was as Erdogan would have wished. The AK Party did not secure the absolute majority he desperately wanted. He will get his presidential system, and amass more power than any elected leader in Turkish history, with dubious checks and balances to keep him in line, but now the limits set out in Turkey’s new constitution will loom large. And the MHP suddenly finds itself in the position of spoiler to Erdogan’s agenda.

Add to this Turkey’s tanking economy, which is heavily dependent on international trade and financing, and the wiggle room Erdogan has to act authoritatively narrows significantly.

READ MORE: As Donald Trump undermines NATO, what can Canada do?

So, Erdogan is about to launch Turkey, a NATO ally, into a new authoritarian era—but let’s call it authoritarianism lite, for now. It remains to be seen how he will use his new powers and how his MHP allies in parliament, not to mention foreign investors, will react. If they decide Erdogan is going too far, they could scuttle his agenda and crash the economy.

The bigger issue is how Erdogan managed to pull off a majority win, raking in a clear majority in the first round of the presidential election when most pundits assumed he would need a runoff.

As much as his opponents try to deny it, Erdogan is still a popular figure, and Turkey’s religious-minded majority is still voting for him in large numbers, despite economic mismanagement and allegations of corruption. In part, the numbers belie the state of Turkey’s democratic process. During the campaign period, Erdogan and the AK Party dominated Turkey’s media landscape, receiving at least 10 times more coverage than their closest competitors, in large part because virtually all of Turkey’s newspapers and television networks are owned by Erdogan supporters. Opposition campaign workers were attacked and, in at least one case, arrested; and, under the state of emergency still in place in Turkey after a coup attempt in 2016, all non-state-sanctioned rallies were banned.

European election monitors accused the government of tilting the outcome of the elections in its favour. Still, Erdogan’s margin of victory—22 per cent more than Ince—suggests a deep-rooted loyalty among his supporters. His brand of populist politics is working, and it has been for a decade and a half.

There’s a reason for this, and it’s a reason all western democracies, particularly those reeling from their own populist insurgencies, should take as a warning: Since the founding of the modern Turkish republic in 1923, conflicting ideologies have dominated its national politics. Turkey’s political spectrum has never developed a centre, a space where everyone can agree on the basic principles that will guide society. Without that consensus on core values, a society risks rupture.

History has made Turkey especially prone to this kind of ideological polarization. Since its founding, two mutually exclusive ideologies have dominated its society. One of them surrounds Mustafa Kemal Ataturk, the founder of modern Turkey who, according to its adherents, freed the nation from the medieval obscurity of the Ottoman empire and transformed it into a forward-looking, secular and western-oriented democracy. The second is the ideology of Erdogan who, according to his followers, will re-establish the supremacy of Islam and fulfill the manifest destiny of the Turkic people.

For the first eight decades of modern Turkey, Kemalism ruled supreme. It’s brand of secularism was extreme, closer to French laicism than what Canadians understand as the secular ideal. Kemalists secured their dominance through a highly centralized elite that used coercion and force to maintain its grip on power. An educated, and western-oriented bureaucracy controlled the military, the judiciary, the police forces and the media.

The first time a Turkish leader, Adnan Menderes, a religious-minded centrist, tried to change the system, he was accused of conspiring against the Turkish nation and hanged. That was after Turkey’s first military coup in 1960. Two more followed, each carried out to prevent religious expression from normalizing in the public domain.

Over the last 16 years, under Erdogan’s rule, Turkey’s conservatives have taken their revenge. They have ostensibly done to the secularists what was done to them. Their response is, in some ways, understandable considering the pressures they faced under secular rule. When the pendulum shifted in their favour, it shifted hard to the other extreme.

Herein lies the lesson: In the absence of a dampening effect at the centre, it’s difficult to stop the ideological pendulum in politics when it starts swinging. As one extreme gains momentum, the other builds up potential energy, a phenomenon we’re witnessing in real time in the U.S. where conservatives and nationalists have rallied around Trump’s message of strength and national honour while liberals have retreated into identity politics. The centre is emptying.

READ MORE: Why 2018 will mark the end of centrist politics

We’re seeing similar trends developing in Europe. In Canada, a more subtle version of the same process began with Stephen Harper, whose rhetoric, looking back, sounded in some respects like Trump’s. The reaction to Harper produced a liberal backlash that ushered in Justin Trudeau, the neophyte poster boy for the kind of liberal populism that feeds the ire of conservatives. And then came Doug Ford.

But if Turkey is a warning sign, in some ways it also offers a glimmer of hope that even populism supercharged by decades of ideology can come to an end. Erdogan may have proven he’s still the top dog in Turkish politics but these elections also introduced a new contender. Ince, a 54-year-old former physics teacher, proved a centre does still exist in Turkey. Like Menderes before him, he embraced Turkey’s Islamic heritage and introduced a more constructive form of nationalism, built on accomplishment rather than birthright.

Ince electrified Turkey’s opposition supporters, particularly youth who are increasingly growing tired of Erdogan. The 30.6 per cent he managed in the presidential election may have lagged far behind Erdogan, but it was 8 per cent more than the party he represents, the CHP, managed in the parliamentary ballot. And after the results were confirmed, he gracefully conceded defeat, unlike his predecessors.

Ince is emerging as the best hope for Turkey’s future and the first leader to truly thrive at the political centre, but his position is not secure. The current CHP leader, 69-year old Kemal Kilicdaroglu, who has tried and failed to shift the CHP from hardline Kemalism, appears determined to stay on and keep his nation’s ideological pendulum swinging. If he succeeds, he will turn a historic moment into a historic flop.