"There are times when I miss home, my family, the sun. But sharing the stories of the recipes I brought from Mexico has helped me reclaim my identity here." 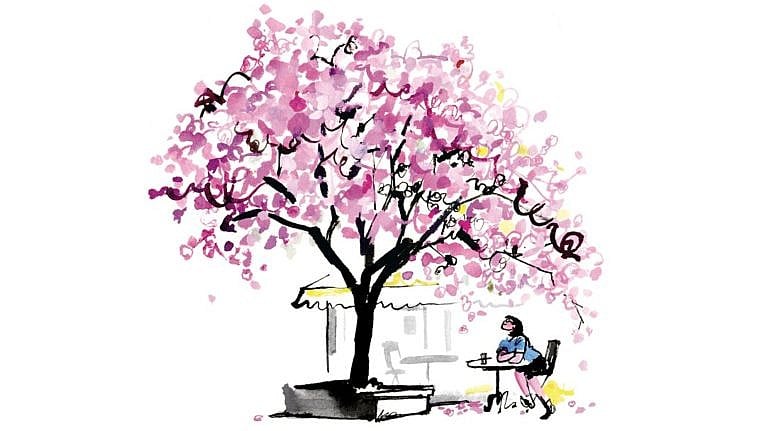 “I loved Vancouver’s tree-lined streets and felt at peace so close to nature.” (Illustration by Lauren Tamaki)

I grew up in Mazatlán, Mexico, right by the beach. I moved to Guadalajara for university and stayed on to work there as an English teacher. That’s where I met my future husband, Federico, who was an engineering student at the time. In 1989, just before the birth of our first son, we moved to Juárez, which is right by the U.S. border. We had a good life: Federico worked as an engineer in an electronics factory, we lived in a beautiful house with our three sons, and we loved travelling around Mexico. I cooked for my neighbours and friends all the time—dishes like fried quesadillas and sopes, which are small filled tortillas.

I always thought, If we don’t mess with the wrong people, we’ll be safe. But in Mexico, gang violence is out of control. In 2014, Federico’s mother and sister were kidnapped and killed. He kept pushing the police to arrest the suspects. One day, in the summer of 2015, my middle son was home alone. Some men came to the house asking for money. They said, “If we come again and you don’t have it, you’re going to work for us.” We were scared for his life.

We sent him to Vancouver Island to stay with a friend of ours. We thought he’d be there for six months, until things got better in Juárez, but they never did. In April of 2016, our son met someone who worked for an immigration lawyer. They said that our family had a solid case if we wanted to apply as refugees with protected person status. I didn’t want to leave Mexico. Our families lived there, and Federico and I were making plans to retire to a home in the mountains. But I felt like we had no choice. We got all the relevant documents together and applied for status. Within eight days, Federico and I were on a plane with our other two sons.

We quickly found a room in a house in Surrey, where we paid $200 a week and slept on the floor on top of plastic bags. It was horrible, but I never regretted leaving Mexico. I loved Vancouver’s tree-lined streets and felt at peace so close to nature. I would occasionally walk around the mall, but that made me sad because I couldn’t afford to buy anything. Sometimes I’d just ride the Vancouver SkyTrain all day long.

Our work permits were approved within two months. My husband and sons got jobs in construction while I worked at a pizza shop near Gastown. I also spent a lot of time at the First Christian Reformed Church. I wasn’t a member, but I went there to meet other newcomers to Canada. The church ran a food bank, hosted community dinners and provided clothing to refugees. One day, Federico and I offered to cook dinner for the volunteers as a thank you for their support. We made fried quesadillas with three types of filling: potatoes and cheese, beef, and shredded chicken. It was a simple meal, but everyone loved it. We began cooking there regularly for free. A few months later, I met a woman named Trixie Ling through the church. She wanted to start a non-profit where women from different cultures could cook for a living.

Flavours of Hope started in March of 2018 as a series of pop-up dinners. Fifty people attended the first event, and I remember thinking I could have fed an army with all the extra food we’d made. By March of 2021, Trixie had another idea: Dream Cuisines, an accelerator to help female newcomers start their own food businesses. She invited me to be part of the first cohort. They paid for the kitchen space; I just needed to come up with a name and a menu. I decided on Mis Cazuelas, after the traditional clay pots my mother taught me to cook with as a young girl. I decided on a menu of traditional comfort and street foods from all over Mexico: pozole, flautas, cauliflower and pineapple ceviche, and Tarascan soup.

My takeout business was slow at first—I’m not very good at social media—but eventually it picked up. I dedicated myself to Mis Cazuelas full time and started selling my dishes at local farmers’ markets. I’m now there two or three times a week. My husband and sons have started their own construction and renovation firm together, and it’s doing well. Our businesses are still young, but we’re now able to afford our new lives here. We’re even renting our own house in Burnaby. There are times when I miss home, my family, the sun. But sharing the stories of the recipes I brought from Mexico has helped me reclaim my identity here.