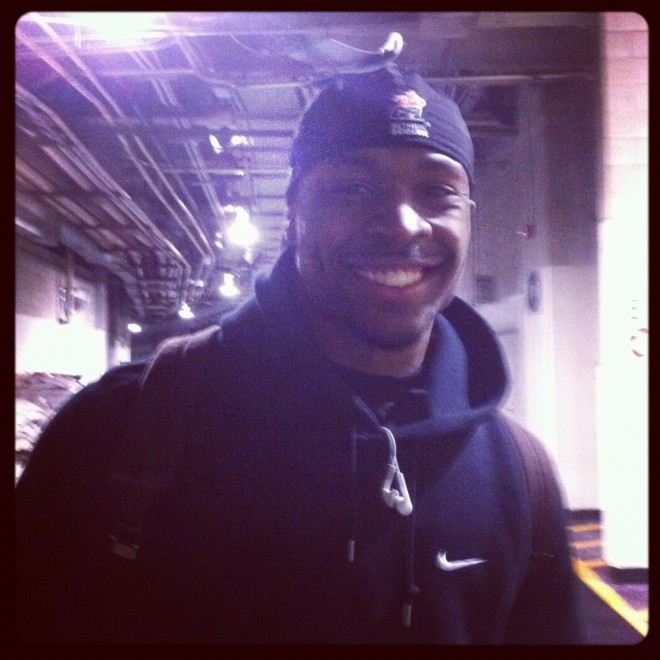 Maurice Price took advantage of me…

My ignorance of CFL football, that is.

My Maclean’s editor asked me to cover the Grey Cup and the million of events that surrounded it because she said it’s “funny” when people who don’t know about sports are forced to report on them.

So I went to the Rogers Centre and waited outside the Calgary Stampeders dressing room, roster in hand, hoping to interview somebody–anybody– about anything other than football. I would ask about post-season plans, I thought. My dad was a sports writer (he wrote a book about the Argos in the ’80s) and he said a lot of the players work other jobs in the off-season. He once wrote a piece  about CFL players who work as repo men in the summertime. Maybe I’d find some repo men.

I flagged down the first muscular guy who walked out of the dressing room. He told me he was in a hurry.

He smiled and said ok. And then he asked the first question: “Do you know who I am?”

(If you are ever forced to cover a sport you know nothing about, bring a photo roster)

“No, I’m sorry,” I answered. His friend, another burley black guy, laughed.

“I’m the team trainer,” he said. “They come to me to get in shape for the season.”

Oh cool, I thought, I’ll ask him about their pre-game meals.

“I make them eat chicken nuggets  and hamburgers and pizza,” he said. “It’s good for your nutrients. That’s how we get so big and strong and fast.” The trainer told me chicken nuggets were actually the standard in football nutrition. He said they eat nuggets in the NFL, too: “overpriced nuggets, from McDonald’s.”

Something wasn’t right. “Come on man, just tell her who you are,” his friend said.

I googled Maurice Price. He was standing in front of me.

Maurice is from Orlando. He says the biggest difference between Americans and Canadians is that Canadians have “bigger heads.”

“Physically,” he said. “I don’t know what it is.” Either he’s been watching too much South Park or he’s right.

If we do have bigger heads that’s about all some of us have in common. Stampeders fans-easily distinguishable from Torontonians by their smiles (and of course the occasional cowboy hat) aren’t afraid to brave the elemtents. I’ve seen 15–and counting–in shorts. And one guy in a tank top. They must eat their chicken nuggets.