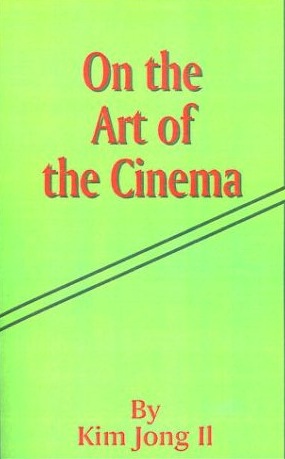 This might be an appropriate time to link to a couple of posts Merrill Markoe wrote in 2006, where she looked through two of the books Kim Jong-Il wrote when he was merely a dictator-to-be. One was “On the Art of Opera,” and the other was “On the Art of Cinema.” There’s also this piece from 2005 by John Gorenfeld, who gives a little more background on the books.

In these books, written when the future Glorious Leader was just out of university and learning the rudiments of controlling the country’s culture, we learn what we might expect to learn: capitalist art is decadent, but the Revolution will also have no truck with artsy formalist art that the people can’t understand, so the solution is to have art that speaks directly to the people in a language they can understand, and delivers politically correct messages about Communism. By a strange coincidence, the peak of both musical theatre and film has been achieved by productions of the North Korean government. And everyone, of course, must know what their real job is: unlike Western movies, which are compromised by the star system, actors in his idea movie “must be ideologically prepared before acquiring high-level skills… The actor requires an ardent love of his class, and a burning hostility towards the enemy.”

Yes, it’s your usual Zhdanovite boilerplate, and let it be said that none of this is actually funny if you have to live and work under people like that. It’s still hard to resist making fun of it, and Markoe does her usual good deadpan job. There are also some funny reviews of “On the Art of Cinema” at its Amazon.com page, as well as the page for “On the Art of Opera,” to the point that the books are listed under “Humor & Entertainment.”