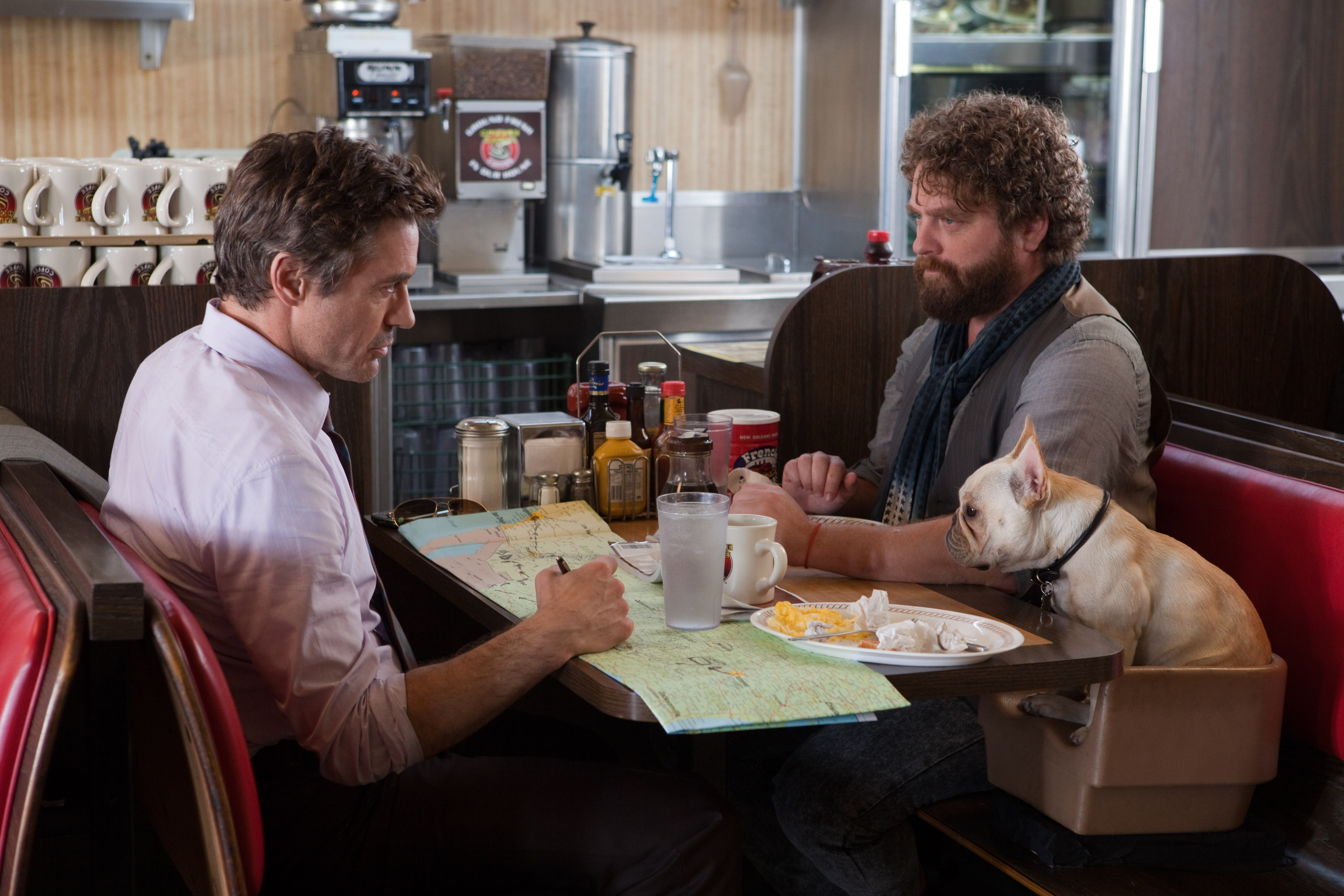 Robert Downey Jr. (left) and Zach Galifianakis in ‘Due Date’

It’s hard to come to a movie without preconceptions. I saw Zach Galifianakis spark up a joint on Real Time With Bill Maher last week, thinking I was watching history being made, but then Maher tells Wolf Blitzer on CNN that it wasn’t weed after all, just cloves—”otherwise I would have smoked it.” Now I’m wondering if, instead of getting an on-air buzz, Galifianakis was just creating buzz for Due Date, in which plays an addled stoner opposite Robert Downey Jr.. A few nights ago, Letterman had Robert Downey Jr. on and Dave went into full-bore flattery mode, raving about Due Date as if it were the greatest movie ever made. At he prattled on, Downey kept rolling his eyes, as if to say, “Dave, what were you smoking?” Due Date is a formula comedy, a buddy road movie that plays like a highball mix of The Hangover and Trains, Planes and Automobiles, with Downey cast against type as the sober straightman and Galifianakis acting typically off-kilter as his shambolic travelling companion. So how is it? Well, I could have done without the masturbating dog. Really. But Due Date pretty funny. . . in places. While the story just goes through the motions, an acerbic Downey turns the movie into a meta acting class, with wild child Galifianakis serving as his puppy-dog apprentice.

Despite a brief, blousy appearance by Juliette Lewis as a dope dealer, Due Date is a very much a boy’s movie. So is the other big studio picture opening this weekend—Megamind, a thin but surprisingly witty 3-D animated feature from DreamWorks. It’s a smart, sparky send-up of the super-antihero, or anti-superhero, with a post-modern finesse that reminded me of Ghostbusters. You know that there’s something screwy about Hollywood when a blockbuster cartoon presents a more profound and nuanced view of good and evil than a high-pedigree political drama. I’m referring to Fair Game, which dramatizes the real-life scandal involving unmasked CIA spy Valerie Plame Wilson, who was stripped of her secret identity after her husband, Joseph Wilson, blew the whistle on the mythical weapons of mass destruction in Iraq. Powered by a strong performance from Naomi Watts, Fair Game tells a compelling and necessary tale. But in the interests of political clarity, righteous moral drama is allowed upstage human intrigue.

Also playing in limited release this weekend in Toronto are two top-notch documentaries. Marwencol , playing at the TIFF Bell Lightbox, is a stranger-than-fiction portrait of an outsider artist working with dolls in the no man’s land between art and delusion; and A Drummer’s Dream, a wonderful music documentary from Canadian filmmaker John Walker, is essential viewing for percussion fans—playing at Toronto’s Royal Cinema, it deserves to be seen on the big screen with full theatrical sound.

Any resemblance to The Hangover is not coincidental. Due Date was produced, written and directed by The Hangover‘s Todd Phillips. Instead of a gang, we have an odd couple: Peter Highman (Downey Jr.), expectant  father, and Ethan Tremblay (Galifiankis), aspiring actor and disaster magnet. In The Hangover, the boys were trying to make it home for a wedding; in this case, the deadline is the birth of Peter’s first child. Ethan literally bumps into him at the Atlanta airport, where his shenanigans get both of them kicked off a flight to L.A. and placed on the no-fly list. Which sets the stage for a cross-country road trip in a rental car, with Ethan bringing along his dog plus his father’s ashes in a coffee can. But the story seems secondary to the casting, which involves twofold role reversals. First there’s the drug thing—with Downey, notorious ex-drug addict, cast as a sober control freak in a crisp suit opposite a stoner. Then there’s the thespian thing—with Downey, genius actor, playing the foil for a character who is heading to L.A. with delusions of Hollywood grandeur. At one point, Downey’s character actually starts giving Ethan a method acting lesson, and some sense the whole movie is kind of acting showdown between the hyper-controlled veteran and the reckless upstart. Along the way, there are some wild tonal shifts—the movie’s lunges into sentiment feel contrived. And, like some of Judd Apatow’s comedies, this is a buddy movie that pushes the homoerotic envelope. Between his much-talked-about perm and his fey mannerisms, Galafianakis offers ample suggestion his character could be gay without spelling it out. And Downey, whose character has a violent temper, acts so straight he could be in the closet. As for the masturbating dog . . . don’t ask, don’t tell.

The title character of ‘Megamind,’ voiced by Will Ferrell

In the tradition of fractured fairy tales, which include Shrek, this lively animated feature subverts and remixes superhero mythology with zippy one-liners, stylish visuals and comic performances from a cast that’s too cool for school. Voiced by Will Ferrell with an elusive Euro-intellectual accent, Megamind is a super-powered egghead from another planet who casts himself as a super-villain in Metro City. His squared-jawed alien compatriot, Metro Man, already has the superhero franchise sewn up. Megamind is an amalgam of every arch villain in comic book culture, and their satirical descendants, from Dr. Evil to Mr. Burns. But though he’s a parody of a parody, Megamind seems oddly original, in large part because of Ferrell’s zany performance. Megamind is a hopeless villain, a perpetual loser whose plots backfire and whose threats are riddled with malapropisms—until one day it looks like he’s succeeded in killing off Metro Man (Brad Pitt), the city’s beloved savior. That, of course, poses a problem. What’s a supervillain to do without a superhero to fight? So Megamind sets out to create a worthy rival. But the technology goes awry, and he ends up foisting super-powers on a nerdy TV cameraman (Jonah Hill), who goes rogue and starts terrorizing Metro City as a caped villain named Tighten. Caught in the middle is spunky TV news reporter Roxanne Ritchie (Tina Fey), the former object of the nerd’s deluded and unrequited love.

Megamind’s ability to shape-shift into different characters allows Ferrell to indulge in a wild repertoire of voices. Especially funny is his lisping imitation of Marlon Brando as Superman’s father, Jor-El. Tina Fey’s personality, without her face, seems kind of lost in her generic cartoon rendering. But Johan Hill’s Tighten looks exactly like Jonah Hill, recast as a creepy, red-haired stranger. (Are redheads the last minority on the planet one can safely insult?) Director Tom McGrath (Madagascar I and II) spins out myriad references and sight gags while maintaining a breezy touch. (Love the Megamind posters modelled on Robert Fairey’s Obama poster, with the slogan “No we can’t.”)  The dialogue slides around like a dialectical slinky, constantly inverting the moral polarity of “good” and “bad.” The soundtrack is stacked with rock songs about badness, while Hans Zimmer’s score rides the line between parody and theft, with liberal quotes from Mission Impossible. Emotional engaging without sentimental overkill, Megamind should captivate the kids while dazzling their parents with pop erudition. 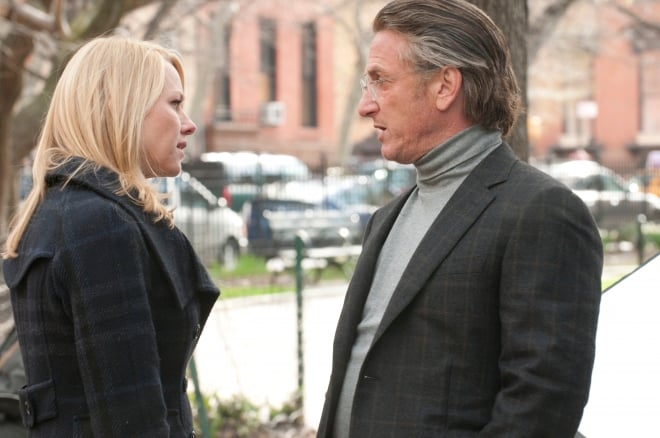 Fair Game is another message movie courtesy of Participant Media (Inconvenient Truth, Countdown to Zero), America’s designated voice of cinematic liberalism. It’s a ripped-from-the-headlines drama about Joseph Wilson and his wife, Valerie Plame Wilson—respectively the ex-diplomat and CIA spy who became targets of a White House smear campaign after Wilson became a whistleblower exposing WMD fraud. You would think that the politics would be the most compelling aspect of a movie like this, which is based on the couple’s respective books. And to be sure, the official narrative sprints along with the hopped-up, jittery energy of a political thriller. But the political story has been told. Curiously, the most explosive acting from Sean Penn and Naomi Watts occurs in the scenes of domestic tension, and ultimately in a flat-out marital fight. Fair Game is no Mr. And Mrs. Smith, but it does present an extreme example of two working parents with wild jobs. Plame’s character takes the heroism of the working mom to a whole new level—as a mother of young twins who jets around the world doing undercover work in one hot spot after another. She’s almost too good to be true, the all American spy/mom. When not running dangerous covert operations, and keeping her husband’s temper in check at dinner parties, she’s the one who has her eye on the kids in the brief nanny-free interludes at home. Penn, meanwhile, portrays his character as enough of a grandstanding blowhard that, while we’re expected to appreciate his heroism, we have to wonder how happy Joseph Wilson would be with his own portrayal. And we suspect  he may, in fact, be even less sympathetic than Penn allows. Either way, this may be a classic case of “too soon,” of reality being rushed into docudrama, and of actors being too close to their real-life characters to interpret them freely. 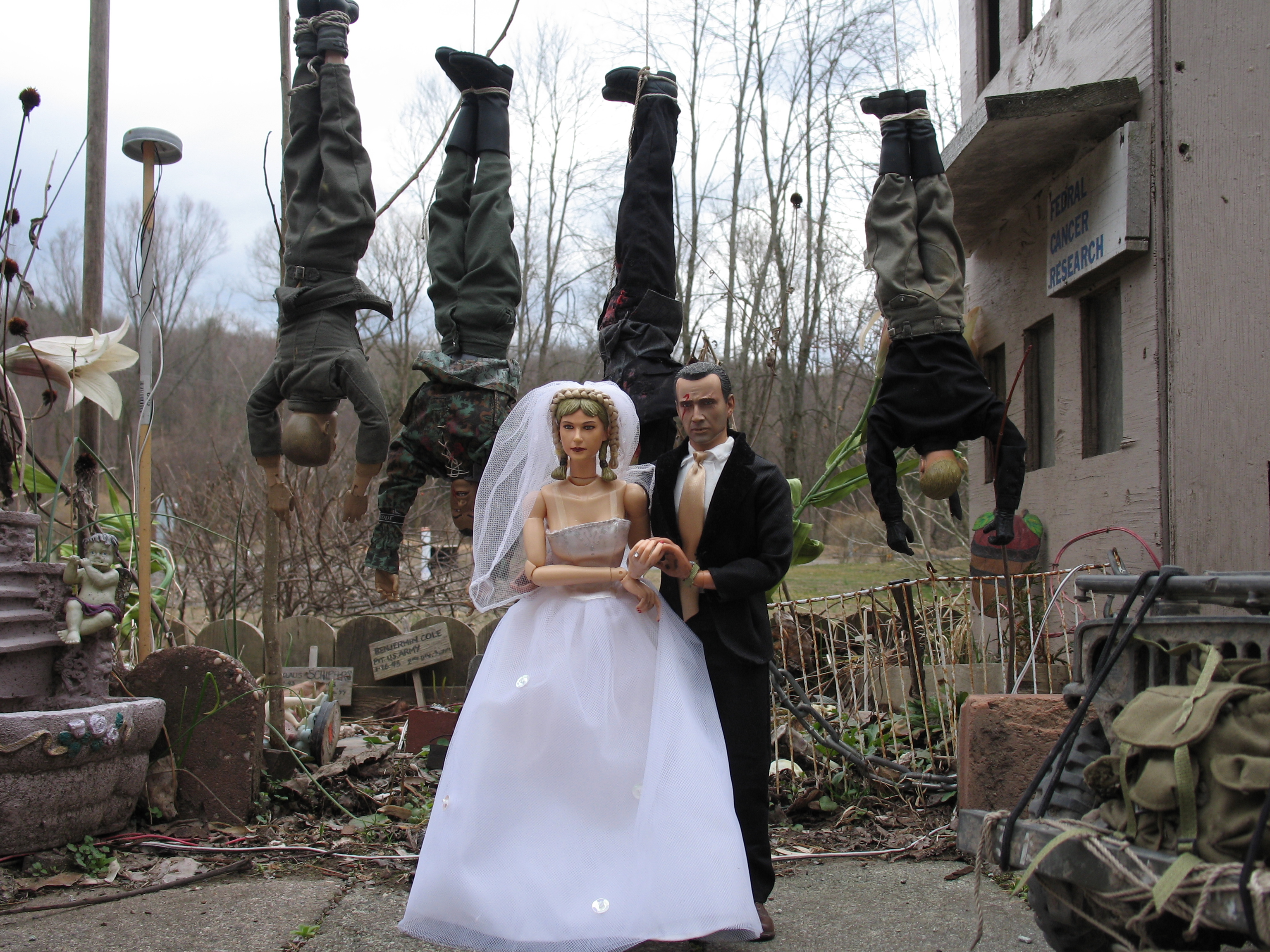 Marwencol is the portrait of an artist who’s not trying to make art. it tells the story of an American named Max Hogancamp, whose entire memory was wiped out when he was brutally assaulted by five men outside a bar in his hometown at the age of 36.  That was ten years ago. Since then, he has designed and perfected a baroque form of homemade therapy—constructing an eerily authentic scale model of a World War II Belgian town in his backyard, populated with dolls dressed in  period costume. It’s an avatar scenario, in which Hogancamp’s alter ego is an American fighter pilot who is shot down and saved from the SS by a hot gang of Barbie Belgians. In this wartime Shangri-La, the local women give Hogencamp his own little building, where he opens a bar called the Ruined Stocking where he stages catfights “for entertainment purposes only.” Hogancamp is the ultimate outsider artist, inventing a world that essentially becomes his life. So when it’s discovered, and heralded as art, he feels naturally threatened. Marwencol is a brilliant exploration of the elusive line that separates art from delusion. For more details, read my article in the magazine, Romance in a Miniature War Town. 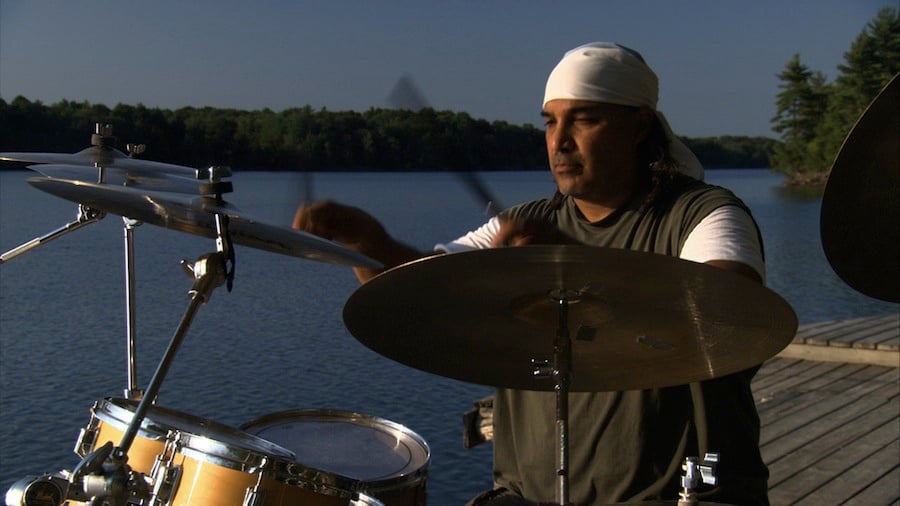 Nasyr-Abdul-Al-Khabyyr in 'A Drummer's Dream'

A Drummer’s Dream is about a summer camp in Ontario cottage country where kids are inspired by seven of the world’s finest master drummers. The musicians range from Havana-born Latin wizard Horacio “El-Negro” Hernandez, who built his first kit using old X-ray film for his drum heads, to Puerto Rican conga player Giovanni Hidalgo, who can tell war stories about performing as part of  Dizzie Gillespie’s band. If you’re a drummer of any kind, this movie is not to be missed. The one-man displays of virtuosity are extraordinary. But the film—directed with clean, lyrical precision by veteran Canadian filmmaker John Walker—also does a fine job of exploring the necessary balance between technical brilliance and soulful simplicity.