Brian D. Johnson reviews 'A Christmas Carol,' 'The Men Who Stare At Goats,' and 'Inside Hana's Suitcase'

Now that the November winds are blowing and the nights are getting longer, it’s time to fly away. To go anywhere, as long as it’s elsewhere and there’s a glow of magic to warm the heart. Magic—in Hollywood, they like to think they can manufacture the stuff. But it’s not that simple. This week I’m looking at three very different films that deal in magic. But only one of them really makes me believe it. It’s also the smallest of the three and, believe it or not,  it’s a documentary—Inside Hana’s Suitcase, which is beautifully directed by Canadian filmmaker Larry Weinstein, is a real-life fable about lost child of the Holocaust, a miraculous film that draws  hope and inspiration from horrific tragedy. The other two movies are the A Christmas Carol, a 3D opus starring Jim Carrey as virtually every character in the cast, and The Men Who Stare at Goats, an off-kilter comedy starring George Clooney as a U.S. solider trained in para-normal powers.  A Christmas Carol, directed by Robert Zemeckis is the weekend’s designated blockbuster, and although it has some of my colleagues dancing an early Xmas jig, it left me cold. But then I wasn’t especially fond of Forrest Gump either. My humbug response to A Christmas Carol appears in this week’s magazine, and you can read it by clicking on: Everybody wants a piece of Scrooge. 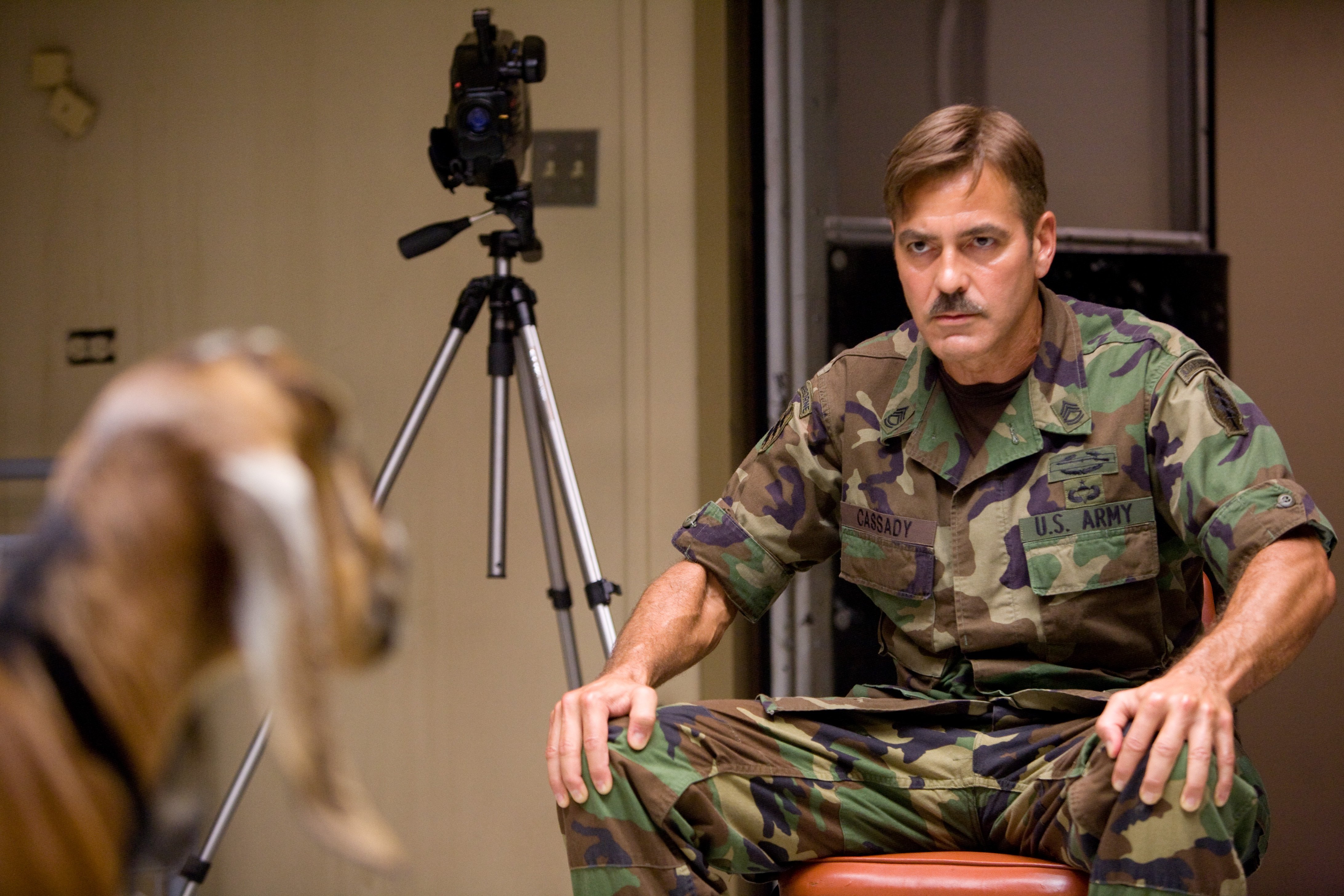 The Men Who Stare at Goats

This may be a George Clooney movie. But it’s not the George Clooney movie. Because this fall there are two, both having premiered at the Toronto International Film Festival. The other is Jason Reitman’s Up in the Air, which is not out until December. And there are also two George Clooneys, at least. There’s Serious George, the shrewd professional who doesn’t suffer fools gladly. You find him movies like  The Good German and Michael Clayton. Then there’s Uncurious George,  the know-it-all goofball who pops up in Coen brothers pictures like O Brother Where Art Thou and Burn After Reading—an idiot who thinks he’s a rocket surgeon.  Both of Clooney’s new movies are comedies, up to a point, and both are based on books. The Goats picture is an outlandish zany farce about guy trying to walk through walls, although it’s inspired by a true story;  Up in the Air is a serious comedy about the world we live in, although it’s fiction.

And here’s the thing. If you’re going to see just one George Clooney movie this fall, you should wait for Up in the Air. It’s by far the better film; and it’s the one for which he’s guaranteed to get an  Oscar nomination. Which doesn’t mean Men Who Stare at Goats isn’t worth a look, if you’ve some free time, and free money, and you don’t want to wait for the video. Hmmm. Talk about damning with faint praise.

I wanted to love this movie a lot more than I did. It’s got a great cast—Clooney’s co-stars are Ewan McGregor, Jeff Bridges, and Kevin Spacey. And The Men Who Stare at Goats is based on a compelling stranger-than-fiction story, a book of the same name by journalist Jon Ronson. According to Ronson’s research, U.S. Major General Albert Stubblebine III envisioned an army of psychic soldiers that would use advanced sensory techniques to resolve international conflicts. General Stubblebine, a West Point graduate and the commanding general of the United States Army Intelligence and Security Command (INSCOM) from 1981 until his retirement in 1984, believed anyone could be trained to perform supernatural miracles. He enlisted a New Age guru named Jim Channon, who imagined ending conventional warfare with a battalion of  “warrior monks” who could see into the future, read minds, become invisible and teleport. Harnessing Channon’s notion of the First Earth Battalion, Stubblebine developed under-the-radar projects at Fort Meade. He tried to harness his own psychic powers, notably the art of phasing, which includes the ability to walk through walls.

With real-life dudes who have names like Stubblebine, it’s a pity to see a story like this fictionalized.  But screenwriter Peter Strachan (How to Lose Friends & Alienate People) and it first-time director Grant Heslov (who wrote Good Night and Good Luck) have conflated characters, mixed fact and fiction, and morphed the material into a whacky Dr. Strangelove-like satire. Not that there’s anything wrong with that. But when the filmmakers are going around telling everybody that the goofiest, most unbelievable stuff in the movie is actually true and that a lot of the more credible stuff is fiction, there’s may be a problem. Without knowing any of this, the problem I had in watching the film was that it didn’t settle on a consistent level of reality. And this quibble has nothing to do with believing in para-normal powers. it’s about believing in the characters, and the story.

The narrative unfolds through the eyes of reporter Bob Wilton (McGregor), who seems to be an avatar for the book’s author. He stumbles across Lyn Cassidy (Clooney), a shadowy half-cracked figure who claims to be part of the New Earth Army, a troop of psychic soldiers, and Cassidy is searching for its founder, hippie visionary Bill Django (Bridges), who has gone missing. A road movie is born as the reporter and the military crackpot embark on a quest that leads them to a training camp for a militia of super soldiers run by a rogue psychic (Spacey). Acid is dropped and weird stuff happens.

I’ve heard rumours that there were a lot drugs flying around on the set. I wouldn’t want to give them any credence, but this is one of those you-had-to-be-there comedies, where you feel the actors end up having more fun than the audience.

A dramatic re-enactment from 'Inside Hana's Suitcase'

One of those rare feel-good films about the Holocaust. Life is Beautiful is another, more controversial example, because some thought it trivialized the Holocaust with comedy.  There’s nothing that provocative about Inside Hana’s Suitcase, and I can’t see anyone taking issue with it. It’s an amazing story, a tragedy that’s explored with great sensitivity, and and transformed by the magic of hindsight. In the end, it’s wonderfully uplifting. Technically, this is Larry Weinstein’s first documentary feature, but as a founding member of Rhombus Media this veteran director has been making music films for years. And this feels like the work of an artist in his prime. Based on the best-selling book, it tells the story of a Holocaust survivor, now living in in Ontario, who lost his sister in a death camp, and whose memories came flooding back with a battered suitcase painted with her name that showed up at Tokyo’s Holocaust Centre. This sounds depressing, and the story is indeed heartbreaking. But, buoyed along by the words of school children reading Hana’s story, it unfolds as an uplifting tale with a stranger-than-fiction narrative that takes some breathtaking twists. Weinstein has not just done justice to a story that rivals Anne Frank’s; with this film he has taken Hana’s story to another level, braving the treacherous waters of dramatization (especially dicey, given the subject). The result is a masterful weave of art and artifact. I discovered Inside Hana’s Suitcase while at its unofficial premiere as “a work in progress” at the Victoria Film Festival earlier this year. To read my blogged first impressions , go to: A holocaust detective story makes a splash in Victoria.