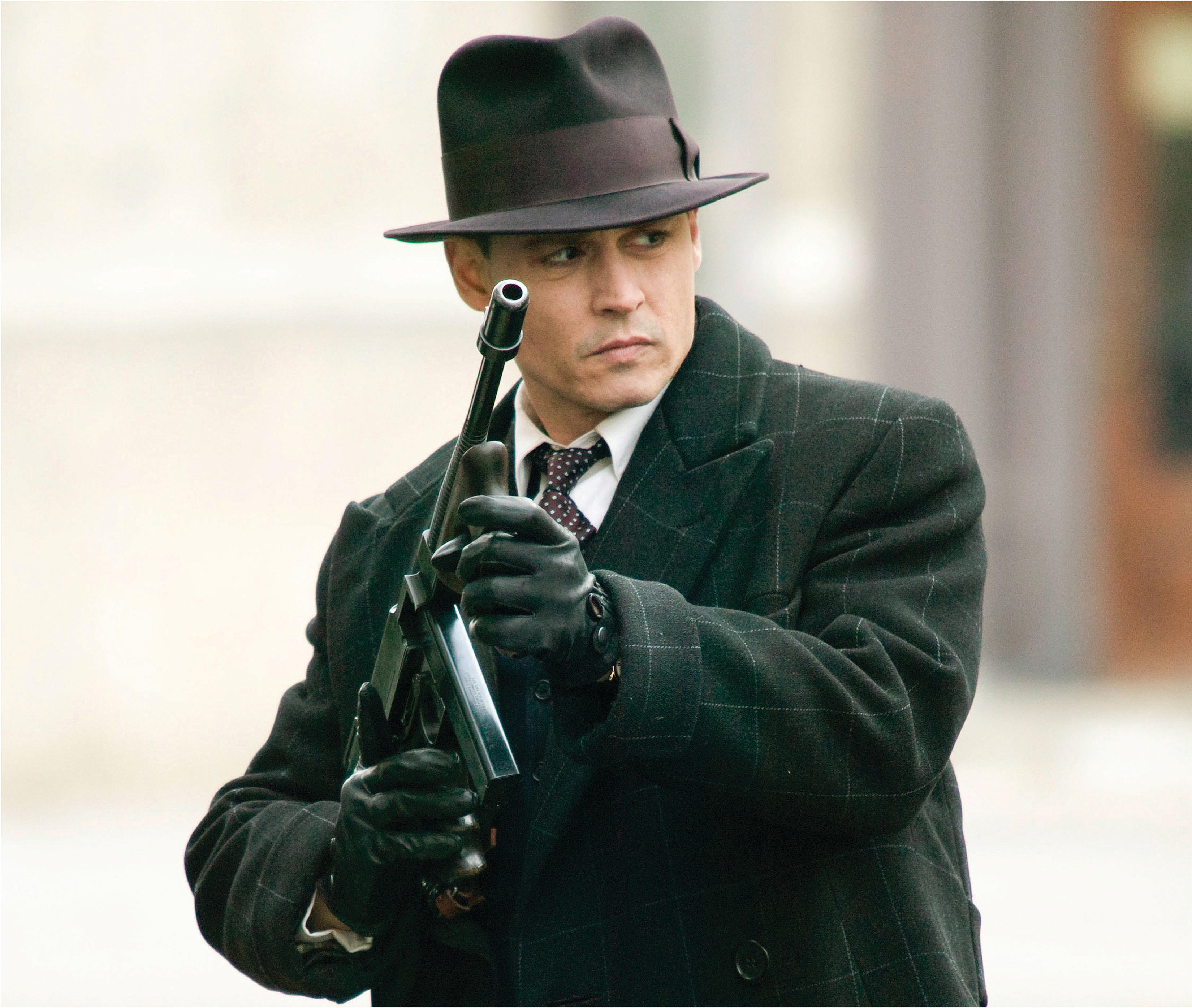 By now it’s indisputable: Johnny Depp is the coolest movie dude on the planet. Forget Brad Pitt. Forget Tom Cruise. . . and remind me, who else is there? Robert Pattison? Sean Penn? Maybe Robert Downey Jr. But no Hollywood star puts together the whole package quite like Depp—combining screen-idol charisma with the grace of a gifted actor who seems to intent on continuing the mythic legacy of Marlon Brando and James Dean. And after the string of Pirates movies, it’s nice to see Depp finally playing a grown-up outlaw in a suit, in a summer blockbuster that is designed for adults.

I’m not sure why the title of Public Enemies is in the plural. Sure, this is a story of gangsters who worked as a team, but it’s really about just one public enemy, John Dillinger, and specifically about the final 14 months of his life before he was gunned down on the sidewalk after leaving the Biograph Theatre in Chicago, having just watched a gangster movie, Manhattan Melodrama, starring Clark Gable and Myrna Loy—a fitting end for a populist outlaw who acted not unlike a movie star himself, and was famous for refunding money to patrons in the banks that he robbed.

Public Enemies is directed by Michael Mann, who has made a career of outlaw romance, from Manhunter to The Last of the Mohicans, from Heat to Miami Vice. This movie plays a lot like Heat in period dress—a cat and mouse game between a frustrated lawman and his elusive quarry. But Christian Bale, who plays the FBI agent on Dillinger’s tale, is even more a cipher than he is behind Batman’s mask. This is Dillinger’s story. Mann portrays him as a purely romantic hero, with an elegaic tone that reminded me of Joey, that epic Bob Dylan ballad about gangster Joey Gallo. But what prevents the characters from surrendering to stereotype is Depp’s performance. Behind the the bravado and the posturing, you can see glints of chilling cruelty in his face. He carves nuance from the hollowsof Mann’s unsubtle script with a brilliant performance that lurks in the shadows, never giving himself up to cliché. As an actor, Depp has the brutal economy of a rhythm guitar player who knows how to hold back—like a John Lee Hooker or a Keith Richards—hiding just behind the beat. 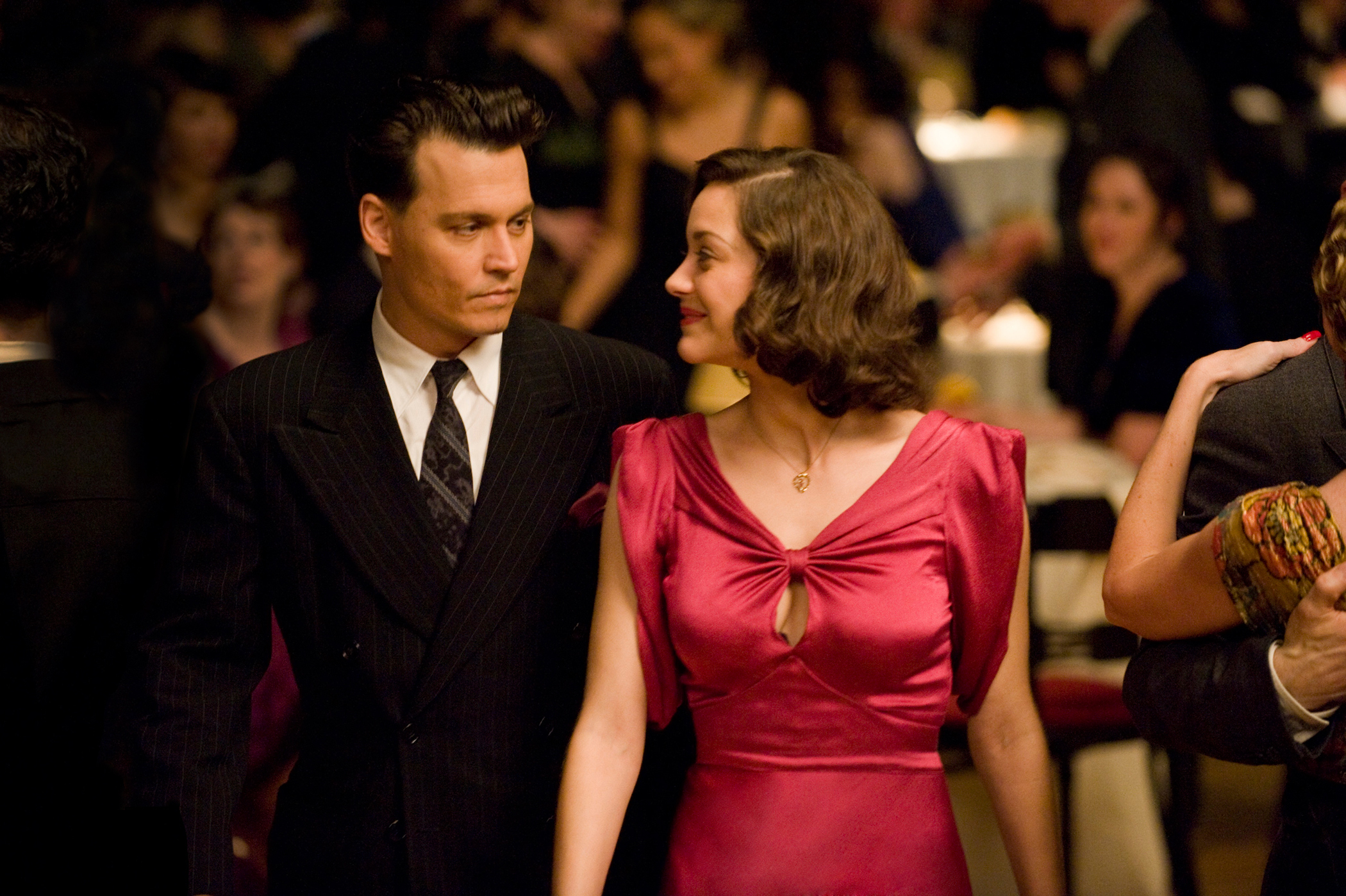 Johnny Depp as John Dillinger with Marion Cotillard as his moll, Billie Frechette

Within this outlaw romance, there is an actual love affair, between Dillinger and a French Native American coat-check girl, Billie Frechette, played by Marion Cotillard (the Oscar-winning star of La vie en rose). Dillinger sweeps her off his feet with a pick-up line for the ages: “I like baseball, movies, good clothes, fast cars, whiskey— and you. What else you need to know?” There is some electricity between Depp and Cotillard—their scenes are among the best in the movie—and it would be nice to see Public Enemies turn into Bonnie and Clyde, but history doesn’t support that fantasy: for the latter stretch of the film, she’s behind bars while he remains on the run. Bale, meanwhile, does a decent job in an underwritten role as FBI agent Melvin Purvis, who leads the manhunt under the aegis of the agency’s emerging autocrat J. Edgar Hoover. And the supporting cast, which includes Stephen Dorff and Billy Crudup, is consistently strong.

But this isn’t really a character drama. It’s an atmosphere piece, which combines reverie with gritty realism as only Michael Mann can.  The director has gone out of his way to reconstruct events as they took place, and shoot in actual locations where the events took place. Yet the romance is inflated by the obligatory sentiment that  gangsterism isn’t what it used to be—that the rugged individualism of outlaws like Dillinger is being ruined by organized crime. “You’re bad for business,” the syndicate boss tells him.  And Mann portrays Dillinger as a kind of trickster spirit. Shortly before he is killed, he inserts a dreamlike sequence of him slipping into the headquarters of the FBI manhunt and wandering around undetected, as if it’s something that he might have done. The look of the film occupies that same otherworldly realm. Mann gives it a verité feel by shooting on high-definition video, often with hand-held cameras, but by staging many of the scenes in a black-licorice shadows,  Mann is also trying to emulate a classical look, as if he’s chasing the idea of a gangster movie. He succeeds. But he’s so enraptured with  surface style I couldn’t help feeling I was watching a facsimile of some kind.

What lets him down is his script, which doesn’t quite measure up to the movie’s ambitions. The dialogue often seems written more for effect than anything else. And the story sags somewhat in the middle after Cotillard vanishes from view. The action scenes, however, are masterful, with machine-gun muzzles belching flame as vintage cars tear through night. And the bank robberies are very entertaining—it makes you nostalgic for the days when it was so much easier to rob banks. But as Purvis slowly tightens the circle around Dillinger—after being humiliated by him time and again, you begin to realize  that the whole movie is just foreplay setting up the big take-down scene,  which is sublimely executed. And there’s considerable satisfaction in seeing Depp’s Dillinger watching Clark Gable as if looking in a mirror.

So yes, this is a gangster movie worth seeing, and it should be seen on the big screen. Depp is one the main reasons to see it. But in watching his performance, I couldn’t help feeling that there was a deeper movie to made—one playing behind his eyes—that Mann had somehow missed in his desire to embrace the romance.