Prejudice and the PQ

Emma Teitel on the Parti Quebecois, religious symbols—and when 'accommodation' is no such thing 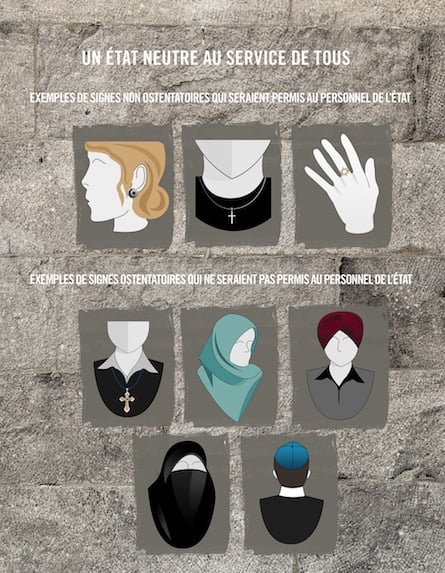 Politicians are always civil when discussing their right to revoke your civil rights, which is probably why Pauline Marois announced this week, amid totally justified outsider criticism (otherwise known as “Quebec bashing”), that she’d like to have a “respectful” debate about her party’s proposed values charter. Some people have described the charter as an insidious form of racism. I don’t think there’s anything insidious about it at all.

To the contrary, I think its prejudice is as plain as the nose on Marois’s face, or the gargantuan crucifix hanging in the Quebec national assembly (totally kosher, by the way, according to PQ standards). In fact, everything wrong with the charter is implicit in this symbol, which happens to be featured in the notorious PQ chart pictured with this blog post. The chart differentiates between religious symbols that are apparently too ostentatious to be worn by public servants in Quebec—and religious symbols that are subtle enough to make the cut. Among the secular, friendly, non-ostentatious symbols is a pair of minuscule crescent moon earrings (presumably Muslim); a Star of David ring (presumably Jewish); and a modestly sized crucifix (presumably Christian). In the bottom half of the chart, you’ll see the forbidden artifacts: a hijab, a niqab, a turban, a kippah, and low and behold, a gigantic crucifix.

So what’s wrong with this picture—beyond the fact that a government would like to tell some of its people what they can and cannot wear? The easiest strategy to apply in answering this question is one from the Sesame Street game: “One of these things is not like the other.” Scrutinize the items listed in the chart and you will discover that the proposed charter is rife with false equivalencies. For starters, the only non-Christian symbols the PQ has deemed civically appropriate are almost non-existent. Unlike the modestly sized crucifix sometimes worn by Pauline Marois herself, the Star of David ring and lunar Muslim earrings are like Loch Ness monsters of religious iconography: essential myth. The closest thing Judaism has to a ring of religious significance, for one, is the horah, a highly ostentatious circle dance (Sacre bleu—they’re lifting the chairs!) As for the tiny crescent earrings … seen those around lately? I didn’t think so.

It seems the PQ has had to invent unassuming religious symbols for us non-Christians because we don’t have any—not by PQ standards, anyway. Even the secular among us tend to be ostentatious: I know more than one Jewish man who wears a Star of David twice the size of the enormous crucifix pictured in the PQ’s forbidden section—and more than one who, while wearing it, doesn’t believe in God. In fact, 52 per cent of Jews don’t submit to a higher power, which doesn’t stop them from wearing funny hats in public, and leaving work early on Friday afternoons. Why? Because one man’s ostentatious is another man’s everyday. It’s called variety. Some say it’s the spice of life.

But Pauline Marois doesn’t like things spicy. This religious accommodation thing, she maintains, has gone too far. The sights, the smells, the sounds … it’s all too much to bear. I’d be more than happy to sympathize with Marois if we were talking about a policy seeking to restrict makeshift mosques in public school cafeterias, or the right of fully veiled women to testify in court. These are religious accommodations worth debating. But tolerating a public servant in a veil? Standing next to a guy in a kippah? That’s not remotely accommodation, religious or otherwise.

The only sign of excessive permissiveness I see taking place in Quebec at the moment is that of the PQ, falling over itself in its haste to accommodate its own xenophobia.