When hockey players betray their country 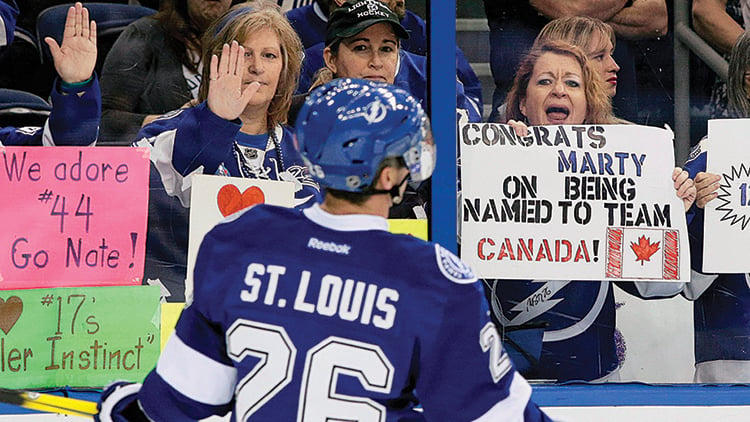 So the wrath of Martin St. Louis was real after all. The Tampa Bay Lightning winger, current holder of the NHL’s Art Ross Trophy, was reported to have demanded a trade after initially being left off the roster of the victorious Canadian men’s Olympic team. The man with the final say on Team Canada had been Steve Yzerman, the general manager of MSL’s pro club. He added St. Louis to the lineup only after all-world teammate Steve Stamkos fractured his tibia. A gold medal earned in limited ice time was not enough to placate St. Louis, and at the trade deadline he was dealt to the Rangers, said to be the only team the Connecticut resident would consent to switching to. (He had a no-move clause in his contract with the Bolts.)

For American fans of the Lightning, assuming there are some, this must be a bitter sequel to the USA’s back-to-back thumpings in the medal round. St. Louis has been with the team since 2000. Few recall him playing for anyone else, though he broke into the league with the Calgary Flames, who gave up on the mighty mite in the middle of a sloppy regime change. He is among the most respected players in the game.

Or he was, anyway. That may change now that he has asked out of an NHL contract while simultaneously using its terms for geographic leverage. He has influenced the fate of two NHL teams in a fit of professional pique that doesn’t have anything to do with the NHL. And that is to say nothing of the effects St. Louis’s hard bargaining will have on his country. If St. Louis is insisting on a trade, trying to punish Yzerman as a pro GM for the way he performed his distinct duties as a national-team selector, doesn’t this amount to blackmail?

Look, I’m not the obstreperously patriotic type. But if we are going to have a Team Canada, we all want it to have a “general manager” who sincerely picks the best side without being inﬂuenced by friendships, lobbying or threats. Some questioned Yzerman’s judgment in setting aside St. Louis, but we can see he didn’t make that call because it was the easy one. We ought to be celebrating his spirit of objectivity, particularly given the results. It is just bad luck that one of Stevie Y’s NHL players was near the cutoff among Canada’s forwards. He handled it in precisely the way we would want and should expect him to.

Discouraging that is a positive harm to the national interest, created in the name of personal resentment. Mere news of St. Louis’s trade demand already has some calling for a full-time national-team GM to be chosen from among executives who do not have NHL jobs. This might be safest, assuming that some Canadian players will be too selfish to accept that many genuine stars must be left off any Canadian Olympic team. Accepting that does not seem like a lot to ask, and the system in place was working pretty well. Are we to simply agree that it has suddenly become impossible?

The potential excuses for St. Louis’s alleged behaviour are hollow. Some of the people I’ve spoken to think the issue is the accuracy of Yzerman’s judgment. If St. Louis really believed he ought to be on the team, putting pressure on Yzerman just means he is actually serving his own honest idea of what is best for Canada.

But would we accept the idea of a player bribing the national-team boss with money for a roster spot, just because he really, really thought he should have one? Would we sit still for him threatening to punch out the GM? What kind of person will we be able to recruit for the job, even from outside the NHL, if the process of assembling a team is to be open war in which any weapon, any form of influence and intimidation, is deemed kosher?

If it were possible that a free-for-all of extortion was likely to produce the best possible Team Canada, I would be the first to say, hey, bring on the hookers and the suitcases full of cash. But one of the reasons Canada had a relatively easy path to the gold medal is that other Olympic teams were undermined by conflicting interests. The Russian home team was humiliated, not for the first time, after favouring Kontinental League homebodies over some NHL candidates. The Czech selection process was evidently just left to a wealthy moron. So it doesn’t look like the Arab-bazaar approach is the way to go when choosing hockey players for the Olympics.