'While the Men Watch' recap

Sports culture could use a little bit more gossip. But why steep the idea in ignorance? 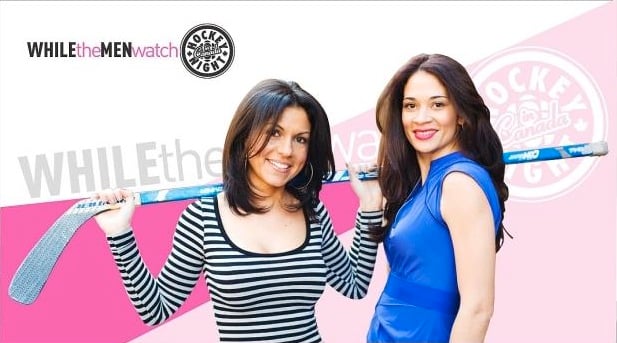 “We naturally started decoding the rules of the game.”

That’s what Lena Sutherland and Jules Mancuso–co-hosts of the highly polarizing, “female friendly”, hockey broadcast While the Men Watch—revealed on daytime television last year, long before their CBC endorsed broadcast went on the air.

If you tuned into that broadcast Saturday night, and again on Tuesday, like I did, you’d know that they’ve succeeded with flying colours. Not only have Sutherland and Mancuso decoded the rules of the game: they’ve mastered them. They just don’t want you to know about it.

How do I know about it?

Because every so often during the broadcast, Sutherland and Mancuso would accidentally slip out of character, ditch their–OMG-hockey-is-so-boring-but-Lundqvist-isn’t-banter, to reveal, if only for a moment, just how naïve and ignorant about hockey they aren’t. In other words, comments like this–“If you can’t score on a power play something’s not jiving”—and this–“Gagne is coming in after being out since September”–were cut short and heavily overshadowed by obviously feigned questions about the rules of the game: i.e. making an observation about a team’s power play performance and then asking, naively, for someone to explain what exactly a power play is.

During Tuesday night’s broadcast, their eyes were fixed not on the camera, but on the game, as they tried their best to discuss whose celebrity wife was in the stands, or how much they used to “crush” on Wayne Gretzky.

And that’s what makes While the Men Watch so offensive to women. It’s not—as half the female Twitterverse would have you believe—the propagation of a myth that Canadian women don’t like or know about hockey—but the reality that women who do know and like hockey have based their broadcast on the premise that they don’t. This is clearly the subterfuge they figure they need to foster in order to appeal to all those hockey-disaffected women out in the Great White Beyond. That, and a tone of discourse that’s shallow and dumb—when obviously the best way to appeal to women and everyone else is to be shallow and clever.

The interesting thing? While the Men Watch may have emerged out of Sutherland and Mancuso’s “frustration with their sports-addicted husbands” but listen in, and it’s obvious that in the process the show has turned them into sports-addicts themselves. If only they’d stop pretending otherwise.

Which wouldn’t necessarily mean they’d have to ditch their gossip-rag analysis of hockey. Sports culture could use a little bit more gossip. But why steep the idea in ignorance? Why can’t you be a woman who is superficial and informed; knowledgeable about hockey and interested in dissecting the players’ looks or the coaches’ fashion faux pas.

I remember watching Leafs games at my aunt’s house when I was a kid (when the Leafs actually made the playoffs) and watching my aunt—who was just as glued to the game as her husband and all the other men in the room—repeatedly and mercilessly rag on Pat Quinn for his schlubby wardrobe and incessant gum chewing (which she found especially repulsive.) She didn’t have to feign ignorance about the game itself in order to have fun or be funny.

It’s too bad Mancuso and Sutherland think they do. Because though they haven’t (as their detractors like to claim) set the clock back on women’s rights 50 years, they’ve done something equally insidious.

They’ve proven that dumbing yourself down is a great way for a girl to get ahead.