A national real estate crash isn't in the cards

The Bank of Canada says we won't have a U.S.-style housing crash, but we resemble pre-crisis America in other dangerous ways 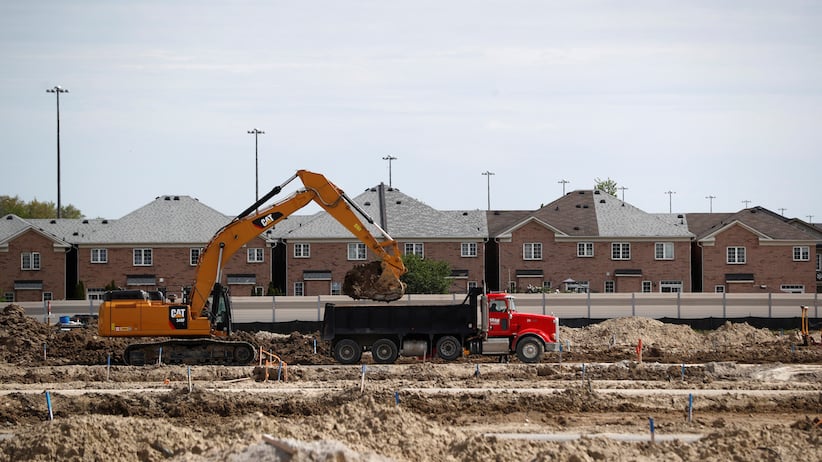 Construction workers build homes on a lot in Vaughan, a suburb with an active real estate market, in Toronto, Canada, May 24, 2017. REUTERS/Mark Blinch

Ottawa didn’t handle the near bankruptcy of Home Capital Group Inc. all that well.

The authorities behaved like it was 1996, the last time a Canadian financial institution failed. They said little in public, while reportedly doing all sorts of prudent things behind the scenes. Meanwhile, flimsy parallels to America’s housing meltdown spread through international markets via Twitter; the instant-messaging functions on Bloomberg data terminals; and the financial press, which appeared a tad too eager to cover a crisis.

It came a month too late, but someone in Ottawa finally explained in convincing detail why Home Capital could never be Canada’s “Lehman moment.” At a press conference on June 8, Carolyn Wilkins, the No. 2 at the Bank of Canada, laid out all the reasons why a national housing meltdown is so remote.

“It’s quite tempting to draw parallels” with the U.S., Wilkins said. Debt is high and home prices are off the charts. Yet, “at the same time, when you understand what really led to the severity of the financial stress in the U.S., which actually went global in 2008 and 2009, it was related to a number of factors that are not present in Canada,” she said.

None of what Wilkins went on to say was revelatory. But she and her boss, Stephen Poloz, apparently thought it needed repeating. Poloz took the inevitable question about the U.S., and then handed off to Wilkins, who had come with notes on the subject. The list of factors that make Canada different from the U.S. in 2006 and 2007 is long, and Wilkins evidently didn’t want to forget one.

Those factors: American lenders were giving money to anyone, whereas Canadians must do much more to prove they can afford their payments; delinquency rates in Canada are extremely low; and Canadian laws punish anyone who tries to walk away from a loan, meaning “households have a greater incentive to hang on,” Wilkins said. Finally, there is none of the wild financial engineering that Wall Street undertook to profit off America’s housing mania at the turn of the millennium. “We have much less securitization,” Wilkins said. “It’s public and it’s plain Jane.”

The occasion for the press conference was the release of the Bank of Canada’s twice-a-year Financial System Review (FSR), an increasingly readable document that the central bank uses to flag weak spots in the circulation of cash and credit. Canada’s chief economic stewards remain concerned about debt and home prices in Greater Toronto and Vancouver. They say there is a “moderate” risk that housing prices in those places could drop abruptly because values long ago broke their tether with fundamentals. Yet, if that came to pass, the central bank thinks the damage would be regional, not national.

That conclusion is based in part by the recent experience of Alberta, where home prices sunk after oil prices collapsed. Canada’s big banks have binged on mortgages as much as anyone, but they aren’t one-trick ponies. Their various sources of income allowed them to treat Alberta’s troubles as a local issue, leaving borrowing standards unchanged for everyone else. The big banks represent an important buffer. As of the first quarter of 2017, the total value of all mortgages in Canada was about $1.5 trillion. A little more than half of that debt is insured, according to the FSR. That leaves a big chunk uninsured, and on the surface looks like cause for alarm. But most of that uninsured debt is held by one of the six biggest banks or a credit union. A mere 5 percent is owed to smaller banks and non-bank lenders. “Unlike the United States before the crisis, the portfolios and business lines of large banks are well diversified, and stress tests suggest that banks have adequate capital and liquidity buffers to weather a large house price correction,” according to the FSR.

Usually, the Bank of Canada doesn’t mind extra emphasis on what could go wrong. It has no regulatory authority over banks and other market participants, so psychology is the only lever it can pull when it doesn’t want to raise or lower interest rates. It publishes the FSR to make sure investors and regulators are paying attention to all the things that could go wrong. That’s why I’m sure the central bank won’t mind someone pointing out the one way that Canada resembles pre-crisis America.

In the years before Lehman Brothers Holdings Inc. went bankrupt in 2008, Americans turned their houses into cash machines. They borrowed against the rising values of their homes to renovate, buy cars, and purchase more property. The economists Atif Mian and Amir Sufi, whose work I referenced a couple of times recently (here and here), say the surge in home-equity loans factored into the pain that followed. Poorer borrowers couldn’t resist the temptation to finance material desires, blowing up the notion that owning a home is akin to forced savings. When prices collapsed, so did demand because too many consumers were stuck with debts worth more than their assets. Mian and Sufi argue that it was this “demand shock” that triggered the Great Recession, not the collapse of Lehman and other lenders.

Well, Canadians aren’t so different than their American cousins. The Financial Consumer Agency of Canada on June 7 released a study on the country’s newfound love of home equity lines of credit, which often are referred to by their ugly acronym, HELOCs. Their use has increased by 40 percent since 2011, according to the financial consumer agency. That is exactly the kind of rapid increase in debt that tends to precede a recession, according to Mian and Sufi. The agency commissioned a survey that found 720,000 families would struggle to make payments on their home-equity loans if interest rates rose by a mere 0.25 percent, and almost one million would be in trouble if borrowing costs rose a full percentage point. “The product’s characteristics may increase consumers’ vulnerability to over-borrowing, debt persistence and wealth erosion,” according to the financial consumer agency’s report.

When parallels are drawn with the U.S. housing collapse, it’s more that the emphasis is misplaced, not that the comparison is invalid. It would take a lot to topple Canada’s banks, and the country’s housing bubbles are too concentrated to trigger a national calamity. But there is a very real risk that Canada is facing the same sort of stagnant-to-barely-mediocre economic growth that the U.S. has endured for much of the past seven years. Like America before the recession, Canada’s post-crisis economy runs on household debt almost exclusively. A credit binge can help an economy burn hot for a while, but it never lasts.