Booms, busts, and mantra about bitumen

On Wednesday, the Pembina Institute and Equiterre released a report entitled Booms, busts, and bitumen: The economic implications of Canadian oil sands development.  The goal of the report, according to its authors, is to offer a broader view than the GDP and jobs numbers often found in reports from groups such as the Canada Energy Research Institute (PDF). Instead, the report succeeds in confounding the interests of Canadians with the interests of the manufacturing sector, re-establishing the debate over the Dutch Disease and aesthetic preferences for economic sectors (the Staples trap), before finally getting to really important issues like the volatility of the industry, the risks imposed by future GHG policy, and the combination of fiscal and regulatory policy leading to significant losses in realized value.

The report opens with a foreword from University of Ottawa economics professor Serge Coulombe. His opening paragraph states that, “Environmentalists don’t accept gross domestic product (GDP) as a complete measure of well-being in the same way that economists do.”  This statement is astounding. I don’t know of a single economist who thinks this way.  In fact, in Greg Mankiw’s Principles of Economics, there is a muti-page section which begins, “GDP is not, however, a perfect measure of wellbeing…” The section goes on to discuss things such as the value of leisure, the costs of pollution, the value of home production, etc. Consider the following quote: “Another thing that GDP excludes is the quality of the environment. Imagine that the government eliminated all environmental regulations. Firms could then produce goods and services without considering the pollution they create, and GDP might rise. Yet, well-being would most likely fall. The deterioration in the quality of air and water would more than offset the gains from greater production.” Including this quote, from an economist no less, in the Foreward to their piece immediately sets the tone for a paper more based on mantra than evidence.

The reliance on mantra continues with the focus on the Dutch Disease.  The Dutch Disease concept is very simple—oil and gas discoveries (or, for that matter, rapid growth in any industry) can cause resources to shift from other sectors, can increase net inflows of capital and net outflows of goods, and thus lead to exchange rate appreciations, and that these effects may combine to hurt other sectors of the economy such as manufacturing. Unfortunately, the Pembina/Equiterre report continues a tradition in this country of equating the welfare of the manufacturing sector with the welfare of Canadians.  The section of the report characterizing Quebec’s economy begins with, “Quebec has always had a strong manufacturing base, which has played an important role in the economies of both Quebec and Canada.” The entire first paragraph is not about Quebec’s economy as a whole, but solely about its manufacturing sector. For a report concerned with accurately measuring the benefits and costs to Canadians, this is an odd approach. As discussed above, GDP is by no means a perfect measure of welfare, but it’s likely a better measure of welfare than the manufacturing share of GDP or the profit margins of manufacturers.

I had the opportunity to comment on the Pembina piece before it was published, and one of my comments pointed the authors back to the original Economist article which they reference extensively. On the second page of that article, there’s an offhand statement which tells you all you need to know: “So, Dutch consumers are roughly 10% better off than they would have been, but companies have been able to compete only by paring their profit margins.”  Consumers being better off while profit margins shrink in industrial production does not seem like a traditional source of concern for environmental groups, but it permeates the report.

The Dutch, it turns out, also experienced some of the impacts Canadians are experiencing today. If you read a little further in the Economist article, it talks about Dutch average wages growing faster than those elsewhere, and about the impact of exchange rates on Dutch citizens’ purchasing power.  Of course, when they talk about higher wages, they’re framed as higher labour costs, and increased purchasing power is framed as more competitive imports.  If we’re concerned about the welfare of Canadians, perhaps citing an article which treats wages as a cost not a benefit isn’t the right place to start. 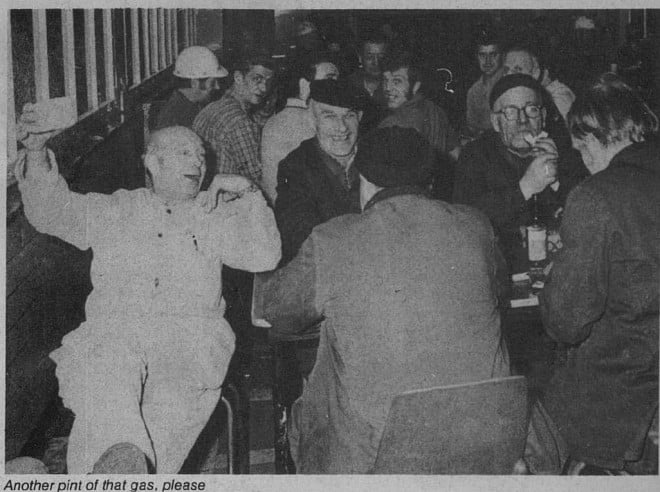 Image from Economist article on the Dutch Disease, November 26, 1977.

In the 1977 Economist article, the magazine worried that after the gas boom fizzled, the Dutch would, “again have to live on their wits.” This issue – the degree to which we can rely on the resource sector in the long term – permeates the last half of the report and raises some important questions.  Sadly, this section too is permeated with catch-phrases like the staples trap or the China syndrome, each of which again carry an aesthetic undertone of preference for manufacturing. We’re told to worry about the contraction of the manufacturing sector, the drag on non-commodity exports, the loss of US market share for Canadian manufacturing, and the like. Why?  We’re not really told why we should worry but we’re certainly to be upset that the downturn is hurting Ontario and Quebec while the new activity is predominantly in Alberta.

The report looks at provincial revenue volatility–an issue which we have come to know all too well in Alberta—which comes with volatility of resource industries. As the report notes, the C.D. Howe institute has shown that the volatility of Alberta’s government revenues was twice that of B.C., Saskatchewan or Ontario over the past 10 years. This presents important budgeting challenges, but is made needlessly catastrophic by poor management.  For a provincial government with a AAA credit rating, smoothing resource revenues through saving or borrowing should not be an issue. Unfortunately, the government’s approach has been to spend in the booms, exacerbating the inflationary pressures, and to cut in the downturns, again leading to a negative feedback loop.

The report highlights the impacts of resource sector cost inflation due to unconstrained development. As Albertans, we should be pressuring the regulator to perform more extensive analysis with respect to the cumulative economic impacts of new projects. With over 2 million barrels per day of production today, an increase in average operating costs of $1 per barrel across the sector could have an impact of $200-300 million per year on Alberta government taxes and royalties. We will get to a point where the inflation externalities imposed by new projects will lead to an overall loss of value of the resource to Albertans, and that should be front and centre in the regulatory process, but it isn’t.

Finally, the report addresses the so-called carbon bubble. The carbon bubble premise holds that approximately half of the worlds known hydrocarbon reserves will remain in the ground if we take world leaders at their word that they will act to keep global climate change below 2 degrees Celsius. This is an important issue for oil sands production, as oil sands remains at the top of the global supply curve for oil, with some of the highest operating and capital costs. If global GHG policies evolve in ways which disadvantage Canada, that impact would be borne disproportionately by our oil sands industry.  The International Energy Agency (IEA) released a report this week which shows that, under their chosen set of policies to reach this goal, global oil production (including natural gas liquids) would drop to 75 million barrels per day by 2035, a drop of 10% from current levels. Natural Resources Minister Joe Oliver and others frequently cite IEA reports citing oil production growth to 110 million barrels per day, but those forecasts are not consistent with statements from global governments including our own on meeting climate change goals.  Something has to give, and the Pembina/Equiterre report is right to highlight the risks this brings about for the oil sands industry’s future.

Overall, I think this report raises some important issues, but does not give those issues pride-of-place. Instead, it chooses to give a voice to mantra which confounds the interests of manufacturers and existing industries with the interests of Canadians and to unsubstantiated attacks on economists, all the while relying largely on reports produced by economists. We should be having a higher-level conversation about the costs of economic transitions, the potential impacts of carbon policies on important sectors of Canada’s economy and about how to manage resource revenue than we are. Let’s have those conversations. You’ll find a good starting points in the back half of this report, so I hope you make it that far.