Canada needs a new prescription for the pandemic recession

Opinion: This is not a 'normal' recession and conventional stimulus like lower rates and government spending won't help with this crisis 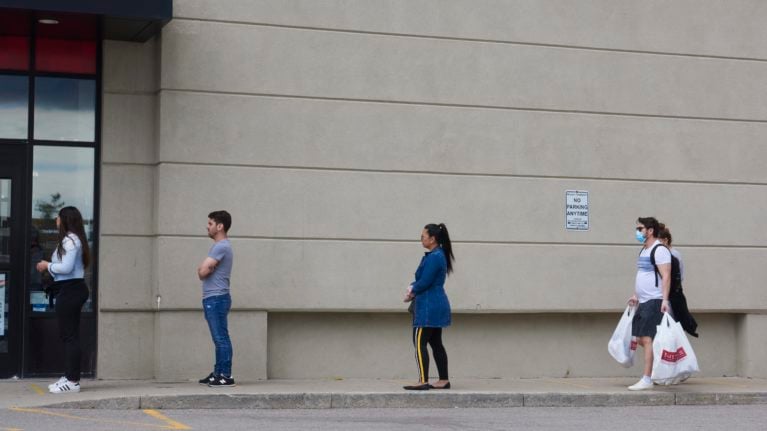 People shop at HomeSense in Toronto, Ont., on May 30, 2020, as stores begin to reopen during the COVID-19 pandemic. (Rachel Verbin/CP)

Just as COVID-19 is not a normal seasonal illness that arrives in fall and leaves in spring, the current recession is not a normal downturn. It’s not just the magnitude of the decline that is new, although that is certainly unprecedented. Rather, it is because the underlying cause—a labour-paralyzing, capital-destroying supply shock—is so uncommon and hard to treat using conventional policy tools. We need a new policy prescription for the current  “pandemic” recession.

A “normal” recession usually features a reduction in what economists call aggregate demand. Business investment in plant and equipment, and household consumption of things like autos and appliances, fall sharply. Employment losses are spread across many sectors but only a small fraction of the labour force ends up losing their jobs.

The current pandemic recession is very different. There is still a reduction in aggregate demand, driven partly by heightened uncertainty. But the bigger feature of this recession is that it is driven by an intentional shut-down of the economy for public-health reasons. This is a massive reduction in aggregate supply—millions of talented individuals who cannot work, and buildings and factories full of expensive physical capital sitting idle.

Much to their credit, governments have focussed on providing financial relief to workers and firms while their regular incomes are reduced. Fast and generous actions by governments have so far prevented tough times from becoming a genuine catastrophe.

But this is just the opening act. No one is predicting that the virus will be finished with us soon. Governments have to begin shifting from the immediate crisis response to their longer-run policy program. What should that look like?

For many months to come, and maybe even years, our world will have new attitudes and realities. People will be wary of being too close to their neighbours or fellow commuters or co-workers. Some may choose not to work at all. Some of our facilities will prove to be too small to operate profitably in a virus-prone world. Airplanes will fly with middle seats empty; shops will open with restricted numbers of customers; meat will be packed by fewer workers, each spread further apart; city buses will contain half their normal riders; schools will operate with fewer students. This reduced efficiency will drive up costs.

In a dynamic economy, a similar “destruction” of capital happens on a miniature, slow-motion scale all the time. New inventions make existing machines obsolete, driving their owners to recapitalize or go out of business. And governments are usually not involved when this occurs.

But the amount of capital being destroyed by the virus today is so large that it threatens the survival of whole sectors of the economy.

How should governments plan for this new world? One thing is clear. No amount of the conventional policy response—lower interest rates and greater government spending—will bring our lost capital back to life.

READ: How Canada has bungled the COVID-19 endgame

What governments can do is to help restore confidence in social interaction between commuters, workers and consumers. Removing the fear of infection is job number one. Any measures that enhance the public’s confidence that they are safe from the virus will allow more workers and consumers to move and gather freely and thereby help restore the value of the economy’s capital.

To be effective, health-related regulations will need to be based on a clear understanding of firms’ production processes and supply chains. The same goes for reorganizing public infrastructure such as border crossings and airports to make them resilient to virus outbreaks.

Finally, rethinking childcare and schooling so that they are both virus resilient and affordable will be one of the biggest challenges governments face, but one essential to ensuring both parents are able to return to work.

Our current pandemic recession is as novel as the virus that caused it. But our conventional recession-fighting tools are not up to the task. We will need some new policy prescriptions to restore the value of our capital and ensure a full economic recovery.