The Trans Mountain expansion isn't dead. But delays will be costly.

Trevor Tombe: A court ruling quashing the expansion is a setback for the Trans Mountain pipeline, Alberta’s energy industry, and the provincial government. But it’s not the end of the road. 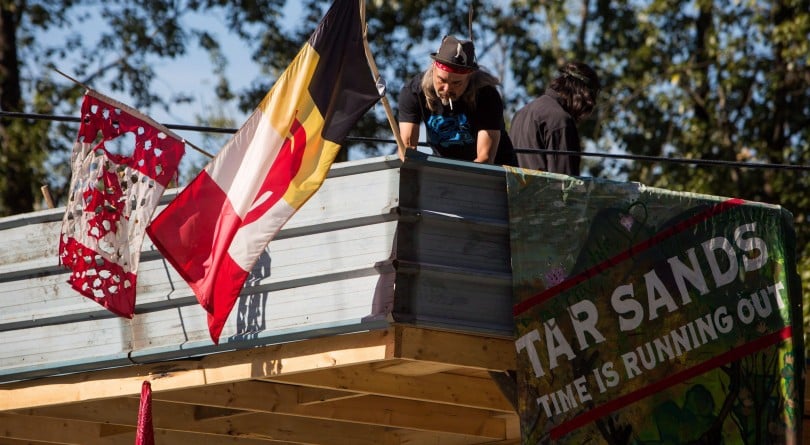 A man known as Blackwolf secures an American Indian Movement flag at Camp Cloud near the entrance of the Kinder Morgan Trans Mountain pipeline facility in Burnaby, B.C., on Saturday July 21, 2018. THE CANADIAN PRESS/Ben Nelms

Trevor Tombe is an associate professor of economics at the University of Calgary, and research fellow at the School of Public Policy

On Aug. 27, the Trans Mountain Pipeline expansion project celebrated the official start of construction. Three days later, that all changed.

This morning, Canada’s Federal Court of Appeal put the pipeline on hold. In its ruling, the court decided federal approval was based on a National Energy Board review that was too narrow in scope, and the consultation with Indigenous peoples insufficient.

It’s no doubt a setback for the Trans Mountain pipeline, Alberta’s energy industry, and the provincial government. But it’s not the end of the road.

The Federal Court of Appeal’s decision

There are complex legal and procedural questions at issue, which smarter minds than mine will analyze in detail. But the decision boils down to two main points, neither of which is necessarily a deal breaker.

First, the court dismissed most claims against the pipeline expansion and its approval. It wrote “most of the flaws asserted against the Board’s process and findings are without merit.” But the NEB made “one critical error” when it “unjustifiably defined the scope of the project under review not to include project-related tanker traffic.”

The government is required to evaluate the full implications of a project—both good and bad. To do this, it requires information. To exclude increased tanker traffic, the court concluded, was unjustifiable and led to “successive, unacceptable deficiencies in the Board’s report and recommendations.” Cabinet could therefore not rely on the report when making its decision. To quote the court again, “With such a flawed report before it, the Governor in Council could not legally make the kind of assessment of the Project’s environmental effects and the public interest that the legislation requires.” So the government’s decision was nullified and a new report that includes this information must be produced.

The court decided that “Canada acted in good faith and selected an appropriate consultation framework. However, at the last stage of the consultation process … Canada’s efforts fell well short of the mark set by the Supreme Court of Canada.” Listening is not meaningful dialogue. And, the court wrote, “the law requires Canada to do more than receive and record concerns and complaints.”

This is where government failed. And why further consultations must be done.

How long this will take, and what implications this has for construction timelines, is tough to say. For context, the federal government ordered deeper consultations with Indigenous groups previously back in January 2016. To facilitate this, a four-month extension was added to the project. And, overall, the “Phase III” consultations (which was what the court to issue with today) took from February and November 2016.

But a full consultation need not be redone. The court was clear: “The concerns of the Indigenous applicants, communicated to Canada, are specific and focussed. This means that the dialogue Canada must engage in can also be specific and focussed. This may serve to make the corrected consultation process brief and efficient while ensuring it is meaningful. The end result may be a short delay in the project…” (emphasis added)

A costly delay for Trans Mountain

A delay is as costly as it is now inevitable.

First, it affects the Alberta budget and the government’s plans to balance. Insufficient pipeline capacity means additional oil production is shipped by rail. That’s more expensive, so producers earn less on each barrel and therefore pay less to the government in royalties. Each $1 per barrel drop in the price of oil increases the deficit by $265 million—the pipeline constraints add between $5 and $10 per barrel to the discount. In its budget earlier this year, the government hoped for $10.5 billion in resource revenues by 2023-24 in order to balance the books. This was optimistic then, but barring unexpected increases in the price of oil, that’s likely now out the window.

Second, this affects the energy industry as a whole. The lower price received by producers here affects even those firms not planning to ship through Trans Mountain. Overall costs to Alberta’s economy from current pipeline constraints is easily billions of dollars per year. Even delays measured in months represent significant additional costs.

Third, this costs Canadian taxpayers broadly. The Government of Canada owns the pipeline (which, I’ve argued, is a good thing). Selling the pipeline when it is completed will not be overly difficult, but that date is now likely later. And since a dollar today is worth more than a dollar tomorrow, that delay is a real cost to taxpayers. In addition, construction costs will now be higher. And since the price the government will fetch for the eventually completed pipeline is largely unrelated to the additional costs it must now incur in the meantime, these added construction costs are absorbed by taxpayers. At the very least, the government will receive a smaller profit from the transaction than it otherwise would have.

Finally, there are clear political implications. The Trans Mountain Pipeline expansion is a central plank in the federal government’s compromise over its climate plan. Carbon taxes were the cost of getting new pipelines approved. Provincially, the stakes are even higher. Today’s decision means shovels will almost certainly not be firmly and convincingly “in the ground” before Alberta’s next election.

But while partisans will be out in full force, context is important. The previous Conservative federal government faced a similar court decision overturning its approval of the now defunct Northern Gateway pipeline. Consultations matter. They’re required by law. And building pipelines is never easy, in Canada as elsewhere. Two weeks ago, for example, a U.S. federal judge ordered a full environmental review of the Keystone XL project, delaying the project there. And the Line 3 expansion in Minnesota faced some regulatory hurdles earlier this year, which it later overcame. This is not unique to Canada, and placing blame on one party or another does the goal of building pipelines a disservice.

On balance, as I’ve written many times before, I think pipelines are worth building. But it’s important to get the process right. We can learn from these missteps, and do better in the future. Today’s decision isn’t the end of the road, though it’s now a little longer.