With the economic update, it's now clear Ottawa must run sizeable deficits for the foreseeable future 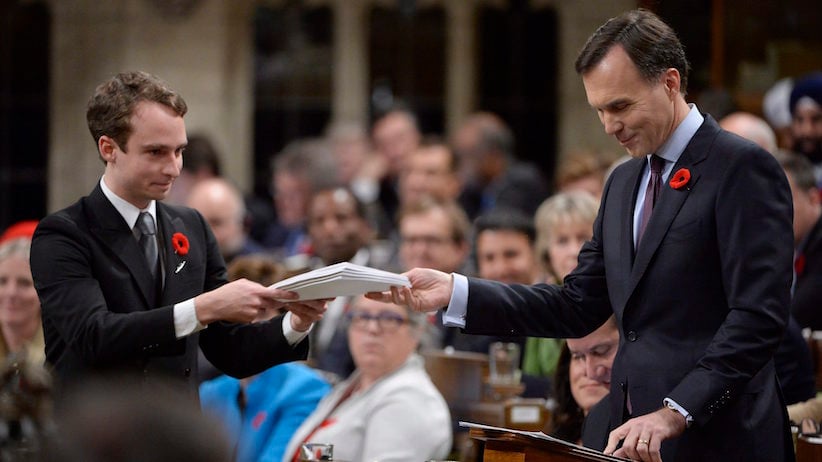 Finance Minister Bill Morneau gives a copy of the government’s fall economic update to a page in the House of Commons on Parliament Hill in Ottawa on Tuesday, November 1, 2016. THE CANADIAN PRESS/Adrian Wyld

Seven months is a long time in politics, and, so it seems, in fiscal policy. Back at the end of March, the new government seemed unsure about what it would use to anchor fiscal policy: the deficit or the ratio of debt-to-GDP. The public musings of Prime Minister Justin Trudeau and Finance Minister Bill Morneau seemed a bit ambivalent, relative to what had been written in the budget documents. The result was mild uncertainty in financial markets and minor weakness in the new government’s credentials as good fiscal managers.

With substantial weakness in Canadian and global economies over the past seven months since the budget, necessity has become a virtue and the uncertainty has been resolved. While at budget time, the prime minister and finance minister were musing that they might be returning to budget balance in short order, it is now clear that the government’s goal must be to stabilize the debt-to-GDP ratio, i.e. to continue to run sizeable deficits for the foreseeable future, disciplined by the need to keep the debt-to-GDP ratio stable (worst case) or falling (better case).

Global economic weakness and depressed commodity prices have cast a pall over Canada’s short- and medium-term growth prospects. With monetary policy essentially a spent force for stimulating the economy, the government has fallen back on traditional Keynesian fiscal policy to take up the slack. Buckets of money will be spent on infrastructure in an effort to spur both short- and medium-term economic growth. A new infrastructure bank will be established to attract private sector capital (and accompanying tolls and user fees) to finance public infrastructure.

But what does all this mean at the macro level for the government budget? With a debt-to-GDP rather than a deficit target, almost nothing. Even using the most pessimistic private sector economic forecasts, the debt-to-GDP ratio rises by a mere percentage point to 33 percent before stabilizing. Canada’s net debt-to-GDP remains lowest in the G7 by a wide margin. With more optimistic growth, (although we have been serially disappointed on the growth front since the new government was elected), even the aggressive spending plans of the government give no macroeconomic cause for concern.

This does not mean, however, that we can ignore government spending for the next few years as long as the debt-to-GDP ratio does not increase significantly. With tens of billions of debt being added to burden future generations (along with climate change and other calamities of our generation) we need to keep a careful eye on the ‘quality’ of spending. Ensuring that the money is spent well, i.e. to buy stronger future economic growth rather than just votes in the next general election, will be the key responsibility of citizens as they evaluate the government’s economic plans.

Paul Boothe is a Fellow at the Institute for Competitiveness and Prosperity.