Jordan Sigalet was himself a force between the posts in his early 20s. Then one morning he awoke with numbness in his foot. 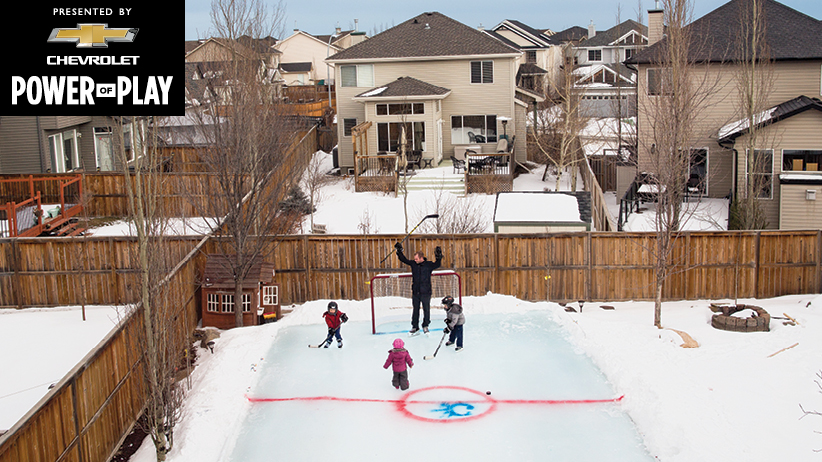 Jordan Sigalet played a total of 43 seconds in the NHL, and he has vivid memories of it.

On Jan. 7, 2006, the Boston Bruins were hosting the Tampa Bay Lightning and had called Sigalet up from the farm team to back up their main goalie, Andrew Raycroft. As had happened a few times before in Boston, Sigalet spent the night freezing cold, sitting on the bench. Yet, in the final minute, with the Bruins up 6-3, Raycroft sprained his ankle and couldn’t finish the game. Sigalet was given the nod. “I played 43 seconds and I didn’t even see a shot, but what an awesome experience,” says the New Westminster, B.C., native. “You can’t believe you’re hopping over the boards in front of 18,000 people in the Boston Gardens—a dream come true, especially after being told you might never play again.”

Three years earlier, when Sigalet was a junior at Bowling Green State University in Ohio (and had already been drafted by Boston), he was diagnosed with multiple sclerosis, a degenerative disease of the nervous system. The promising goalie was told by doctors he likely wouldn’t be able to play hockey—after all, heat and stress are known to trigger MS episodes, and the disease’s symptoms of numbness and blurred vision were not exactly conducive to goaltending. “When I look back,” says Sigalet, “hearing those words lit a fire under me. I wanted to prove to myself that I could play. And for anyone who didn’t believe I could, I wanted to prove them wrong.”

Sigalet defied the odds, playing three years in the American Hockey League, those 43 seconds in the NHL and one year in Europe. At 36 years old, he is entering his fourth season as head goalie coach for the Calgary Flames. In recent years, when Minnesota Wild goalie Josh Harding and Carolina Hurricanes forward Bryan Bickell announced they had been diagnosed with MS, Sigalet immediately reached out, letting them know the disease is by no means a life sentence.

While he may be a laid-back, easygoing guy, Sigalet’s always been goal-oriented—starting from his first year of minor hockey, when he told his parents he wanted to play net. “I was never a good skater or a good forward,” recalls Sigalet. As a young player, he rotated positions, spending the odd day in net. “I loved it from day one. But my parents said, ‘No chance you’re being a goalie.’ ” Marvin and Genevieve Sigalet—who own a small computer software company in Vancouver—had three boys, Stefan, Jordan and Jonathan, all in hockey. They wanted Jordan to learn how to skate—and there was the expense of all that goalie equipment.

But they gave in when he was 12, thinking it might be a safer position, away from checking and ﬁghting. “They didn’t realize you probably get hurt more as a goalie,” says Sigalet, “with that puck coming at you at 100 miles an hour or more.”

After high school, Sigalet earned a spot on the Victoria Salsa in the British Columbia Hockey League. In his second year, he accepted a scholarship to Bowling Green, and the Salsa won the league championship. All of a sudden, Sigalet was a 2001 draft contender—he was picked 209th by the Bruins in the summer before he left for Ohio.

Neither Sigalet nor his parents were anticipating him having a future in professional hockey. “I wouldn’t call him a late bloomer,” says Jonathan, who followed his older brother to Bowling Green and to Boston’s AHL team, the Providence Bruins. “But I wouldn’t say Jordan was dominant as a young kid. By the time I got to Bowling Green, he was unbelievable, he was our whole team.”

Sigalet was a typical college student: growing into his role on the hockey team, dating fellow student Lindsay Wiley (they’re now married and have three children under six) and studying digital arts. He figured if the NHL didn’t work out he’d be a hockey video game developer. By his junior year, Sigalet was getting a lot of ice time with the Bowling Green Falcons. Near the end of the season he played a weekend doubleheader, stopping 66 shots. He wasn’t terribly alarmed when he woke up with numbness in his foot the next morning, which spread up to his chest by the end of the day.

“I was a 23-year-old college athlete, prime of my life, invincible,” says Sigalet. His mom, on the other hand, didn’t like the sound of it—and told him to go to the team doctor, who ordered an MRI. “When he said multiple sclerosis,” remembers Sigalet, “I looked at him like he had 10 heads. I didn’t really know what it was.”

He quickly learned that MS, which affects the brain and spinal cord, could be a debilitating disease, but that it’s different for everyone. There was no way for Sigalet to know how it would progress or what his future would look like. He knew that he wanted to keep playing hockey, and was scared that the Bruins would “sweep me under the rug.” So he kept the diagnosis secret, telling only his family. He pushed himself to play the last two games of the season, even though he had trouble tying his skates and could barely feel the stick due to the numbness in his hands.

Hiding the illness meant that Sigalet wasn’t able to network and talk to others about how to manage the symptoms—nor could he explain to his teammates any adjustments he needed to make to his schedule or training. It was difficult for his brother, too. “I wasn’t playing my best hockey at the time,” says Jonathan. “I was distracted and wanted to talk to someone, but you’re limited in who you can talk to. He was my role model and the guy I looked up to and followed—and to see him be pretty vulnerable, that was tough.”

After six months, Sigalet, then a senior, announced his illness at a press conference—and was floored by the response. He received emails and gifts from players on rival college teams. The Boston Bruins told his agent that they still saw him as a prospect—as long as he could play, they wanted him in the organization.

Speaking out was the best thing he could have done—and he wanted to do more. On top of juggling school, hockey and adjusting to MS medications, Sigalet organized a fundraiser. He took black-and-white photos of his teammates and had them signed, framed and auctioned off—raising $10,000 for the National Multiple Sclerosis Society. 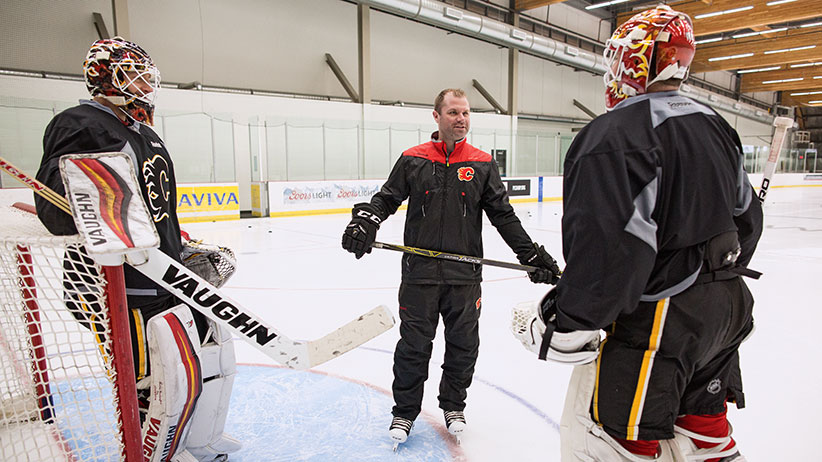 His team voted him captain. “Everyone laughs when they see pictures of me, the goalie, with the C on the jersey,” says Sigalet. While the honour was a nod to his perseverance, Sigalet played like a captain that year. He set a team record of 1,140 saves and led the nation in minutes played. He was a finalist for the Hobey Baker Award, which goes to the top NCAA men’s hockey player, and was nominated for the Best Comeback Athlete ESPY Award. He didn’t win, but he and Jonathan attended the awards ceremony in Hollywood and the after-party, along with Maria Sharapova, Serena Williams and Peyton Manning. “I was overwhelmed,” is as much as Sigalet will offer.

After graduation, he moved to Rhode Island to play in the AHL for the Providence Bruins, getting called up now and then to Boston. The Boston organization signed him three years in a row, each time to a one-year contract. “They didn’t say it, but I knew they didn’t sign me to a three-to-five-year deal in case something went wrong,” says Sigalet. “And I was okay with that—I just set upon proving myself every year.”

In year three, something did go wrong. On Nov. 16, 2007, at a Providence home game, Sigalet collapsed nine minutes into the third period. “I was on the bench when it happened,” says Jonathan. “The play was nowhere near the net when he fell, so no one noticed right away.” To this day, no one, including Sigalet, is sure of what happened, but his doctors believe that he was overheated and dehydrated, which triggered symptoms, causing his knees to give out. When Sigalet collapsed, he likely knocked himself unconscious. He was taken off the ice on a stretcher. “I knew it was probably somehow related to the disease,” says Jonathan, “but I didn’t expect he’d be in the hospital as long as he was after that. He was more or less paralyzed. I thought I knew a lot about MS by that point, but until you see an episode up close, you don’t know what to expect.”

Sigalet was in rehab for a month, going from wheelchair to walker before getting back in net two months after the episode. “I just loved the game too much to walk away from it,” he says. “But after that, I was done in North America—it was a red flag. People were scared, they didn’t want that on their shoulders.” He played the next season in Russia and Vienna, then he and Lindsay got married. “I didn’t want to bounce around and be on a different team every year,” says Sigalet. “We wanted to start a family, so I started looking at different options.”

Instead of searching out a new contract, he transitioned to a goalie school in Vancouver and started teaching camps and private lessons. That quickly led to a coaching gig with the Everett Silvertips in the BCHL, and Sigalet saw a way back to the NHL—this time as a coach. His next move took him to the Calgary Flames’ minor-league team in Abbotsford, B.C., as a developmental coach. And in 2014, when the Flames head goalie coach job came up, Sigalet put his name in.

He’s still amazed by his good fortune. “They could have hired a guy who had been coaching in the NHL for 10 years—or played in the NHL for 20 years,” he says. That’s true, says team president Brian Burke. “We interviewed some other people who really impressed us, frankly,” he says. “But we kept coming back to the fact that this guy’s no better than Jordan.”

Sigalet has brought his own style of coaching to the Flames. “His biggest attribute,” says Burke, “is he’s patient. He’s a quiet teacher. I think goalies beneﬁt from low-key instruction rather than people yelling and screaming at them.” Sigalet never talks to his goalies about his illness or uses it as an excuse. “I didn’t know for a year and a half after meeting him that he has MS,” says Jon Gillies, a Flames goalie prospect. “He just handles it so well. Never talks about it, never complains. Siggy has a real calming presence.”

While annual MRIs show that Sigalet’s disease is not progressing rapidly, he still struggles on a regular basis with numbness, blurred vision and side effects from the medication, which resemble flu-like symptoms. But nothing gets in the way of hockey. There’s even a small chance he’ll play again—and add to those 43 seconds. At away games, Sigalet is the Flames’ third man in, suiting up if one of the two goalies gets hurt—ready to hop over the boards if need be. “I don’t know if I’d be able to stop any pucks,” he says. “But I’d do my best.”