As Nazi symbols echo, remember who we fought on D-Day

War historian David J. Bercuson reflects on the personal sacrifices made by millions of Canadians in the fight against the Nazis and their ideology 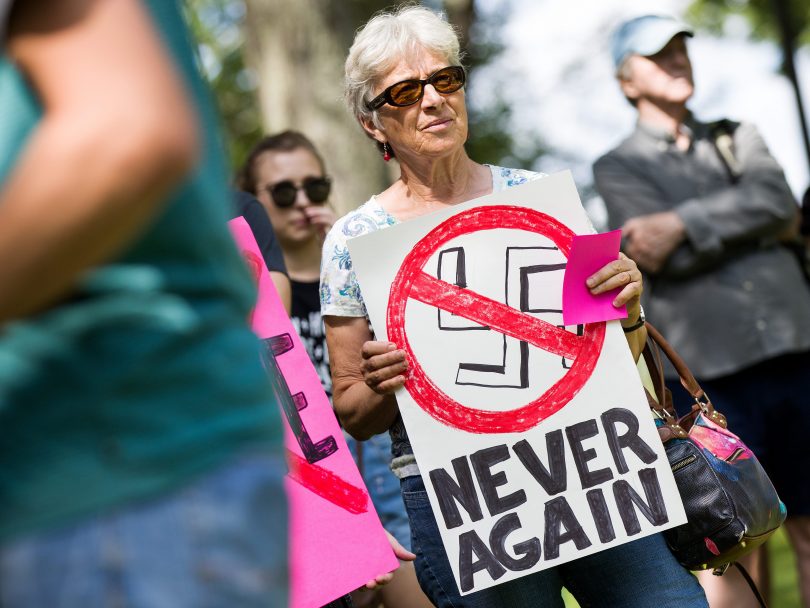 David J. Bercuson is a professor of history at the University of Calgary.

Each year, when the anniversary of D-Day comes around, I think of my father’s cousin, Bernard Bercuson, or rather, Pilot Officer Bernard Bercuson, who was killed in action just after midnight on Aug. 17, 1944. Bernard was a wireless air gunner aboard a Royal Canadian Air Force Halifax bomber, which means that he operated the radio aboard his aircraft and also manned a machine gun. He was one of three Bercuson boys who served in the military, the only one who didn’t make it home. With his death in battle, one ordinary Canadian family paid the blood offering alongside over a million Canadian men and women who fought the Nazis in the Second World War.

In the evening of Aug. 16, 1944, Bernard’s bomber took off from their base at Skipton-on-Swale in Yorkshire, England, and struck out east towards Denmark. Bomber Command was putting forward a maximum effort that evening attacking the port of Kiel, near the eastern entrance to the Kiel Canal, and Stettin on the north German coast. Bernard’s aircraft was assigned to drop mines in the Bay of Kiel. Airmen of the day called these missions “gardening” operations because they likened the mines they dropped to vegetables.

READ MORE: Inside the making of the D-Day Heritage Minute

Several minutes past midnight, Bernard’s bomber was attacked by a German night fighter and was shot down. All seven crew members, six from Canada and the seventh from the United Kingdom, were killed. Today Bernard’s body is buried in a small churchyard in Magleby, a tiny village on the Danish island of Langeland, near where he washed ashore a month after his aircraft was attacked. He lies beside the body of his nineteen-year-old pilot, Joseph G.M. Savard of Montreal. Bernard was 28 when he was killed, Savard, 19.

That night fighter that shot down Bernard and his crew had a swastika emblazoned on its tail, as did every other German aircraft in the war. The swastika, an ancient Asian religious symbol, had been adopted by the National Socialist German Workers Party—the Nazis—early in their history. The Nazi flag, with its black twisted cross inside a white circle on a red background, effectively replaced the German flag during the reign of the Nazi regime. The black clad SS troops wore it on their shoulder. It was on the foredeck of the battleship Bismarck when it first sallied from Hamburg in late 1940 for sea trials in the Baltic. It was on almost every vehicle in the German army and it hung in huge banners in the main buildings of the Nazi regime in Berlin, and elsewhere.

It was on the trucks, on the tanks and on most of the German troops who met the Canadians, the British and the Americans coming ashore on D-Day on June 6, 1944.

The once benign symbol of an ancient Indo-Asian religion became the scourge that flew above the concentration camps, the slave labour facilities and the death camps that the Nazis built in Poland. For Bernard and the millions of Allied troops fighting the Nazis on both eastern and western fronts, the swastika stood for the greatest evil that free men and women ever faced.

RELATED: Why Canada’s casualties were so high in Normandy

Nearly 43,000 Canadians were killed in action in the fight to smother that symbol and everything it represented. They died alongside millions of other Allied soldiers—Russians, Americans, British and soldiers from the Commonwealth, the former French Empire, from India, Australia, South Africa and dozens of other places. Their task was clear, if not easy: Wipe out the greatest evil the world has ever known, and as a result the swastika would disappear.

For decades after the Allies won the war, the swastika did disappear in western civilization and in Russia. Nations that had suffered under the Nazi heel banned it. It became a historical curiosity, waved occasionally in North America by crazy extreme right-wing lunatics whose hate-filled view of the world accorded with that of Hitler. We have freedom of speech laws in our country and if a small group of very extreme haters wanted to display the swastika, they could.

But now this symbol of Nazi hate seems to be resurging, popping up at political meetings, rallies, demonstrations and parades, and is all over the internet. In a recent incident, the Nazi flag was raised above a home in Saskatchewan. The flag that was emblazoned on the aircraft that killed Bernard, the flag that represents everything Bernard and millions of Canadians fought against, that very flag was flying here on Canadian soil.

When I think of D-Day, of Bernard, and of all the others who paid the ultimate sacrifice trying to eliminate the Nazi ideology, I know that he would be shocked by what he had left behind. Aren’t we?